Ratcheting up their resistance to Washington state’s new gun-control law, anti-government gun owners are planning to show up at the state Capitol in Olympia this weekend in an open attempt to be arrested for violating newly-installed rules against carrying weapons into legislative hearings.

The effort to overturn Washington’s Initiative 594, which mandated background checks for most gun sales in the state and was approved by nearly 60 percent of state voters in the 2014 election, originated in December with a “We Will Not Comply” rally at the Capitol. At that rally, which drew hundreds of participants as well as some leading antigovernment figures, gun owners openly exchanged weapons in defiance of the law’s reporting requirements. 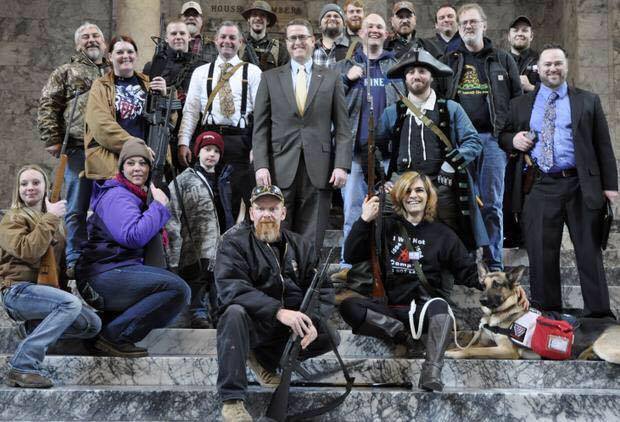 Then, on Jan. 15, about 200 protesters showed up at the Capitol to again protest the new law while the state Legislature was in session. During that event, a number of protesters went inside the Capitol and displayed their long guns in the upper gallery of the House chambers. Such defiance sparked concern among state officials and legislators, who worried that the display was a bald attempt to intimidate lawmakers.

Lt. Gov. Brad Owen huddled with state legislators, and in short order both the House and Senate passed bills banning open displays of firearms in their respective chambers. Shortly after that, weapons were similarly banned from all public hearings in the Capitol.

So now, the same protesters are planning to return in larger numbers on Saturday and defy new Capitol rules. Some of the organizers make clear that they intend to be arrested by state police when they do so.

A Facebook page dedicated to the protest, titled “Our Capital, Our Rights: A Rally For Freedom”, declares, “We call upon the Governor of Washington to uphold his oath and respect our unalienable rights. Liberty For All and The Patriots Stand are teaming up to stand on February 7 and demand that Jim Moeller step down, and our rights be recognized. “

“If the legislature feels the need,” said Sam Wilson of Liberty for All, “to prohibit peaceful citizens from openly carrying firearms into the people’s viewing chamber, it certainly makes a reasonable person question what motivates them to disarm the people viewing them while they are in session, serving as the representatives of the people.”

Already, it appears to be an uphill climb for widespread acceptance of the protest.

The Jan. 15 incursion into the House chambers was denounced by the mainstream gun-rights groups that organized the rally, notably Alan Gottlieb of the Bellevue-based Citizens Committee for the Right to Keep and Bear Arms, who told the Seattle Times that the gun-waving incursion was “the result of a few stupid extremists on our side who not only handled their firearms unsafely, but made the hundreds of Second Amendment supporters at the rally look foolish.”

“Irresponsible actions get us bad results,” he said. “This kind of childish theater hurts our cause.”

However, the protesters were joined in the House by Rep. Matt Shea of Spokane, a far-right Republican with a long history of involvement in “Patriot” causes. Shea also posed for photos with them.