In a latest attempt to capitalize on political and racial controversy, a Ku Klux Klan faction from Mississippi has initiated a “Call to arms in Alabama” in response to federal courts ruling that an amendment to the state constitution banning same-sex marriage was unconstitutional. 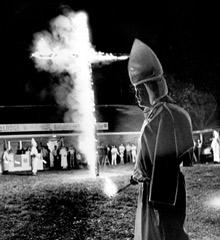 The post, which appeared on the United Dixie White Knights’ (UDWK) website and later on Stormfront — the largest online white supremacist forum — championed Alabama Supreme Court Justice Roy Moore for defying federal courts and called for Klansmen to leave their robes behind and take to the streets in protest.

“The Mississippi Klan salutes Alabama’s chief justice Roy Moore, for refusing to bow to the yoke of Federal tyranny,” Brent Waller, the UDKW’s imperial wizard, wrote in a Stormfront post. “The fudge packers from Hollywood and all major news networks are in shock that the good people from the heart of Dixie are resisting their Imperialist, Communist Homosexual agenda!”

Waller’s reason for his fellow Klansman to wear plain clothes is simple. “We have made the decision that we don’t want to distract attention away from the issue, as anytime the Klan rides, we are made the issue by the zionist controlled media,” he wrote. Not that wearing robes and hoods has been a consideration before.

Klan groups in recent months have sought to capitalize on already tense situations by appearing with a word of commentary and disappearing. Klan members have called for “corpses” on the Arizona-Mexico border, tried to raise money for the legal defense of the police officer who killed Michael Brown in Ferguson, Mo., and even distributed candy as a recruiting ploy in South Carolina. But their rush to the spotlight this time may be different.

Alabama on Monday became the 37th state in the country to recognize same-sex marriage after a federal judge struck down the “Sanctity of Marriage” amendment to the state’s constitution as unlawful. Alabama Supreme Court Chief Justice Roy Moore responded by ordering Alabama probate judges not to comply with the federal ruling, throwing the state into a heated controversy involving states’ rights and federal reach.

In his post, and in subsequent email exchanges with Hatewatch, Waller speculated as to whether the federal government will send “Jack Booted thugs” — a comment meant to invoke Civil Rights era struggles and draw comparisons between the razing of Southern states during the Civil War and what the Imperial Wizard sees as the destruction of Southern values through marriage equality.

“We as White Christians intend to see that no outside agitators bully or intimidate the White Christian majority in the State of Alabama,” Waller told Hatewatch on Tuesday. “We salute those like the chief justice for standing against the Immoral, Ungodly and activist Federal Judges.”