The House Judiciary Subcommittee on Immigration and Border Security will hold yet another hearing this afternoon, and no surprise —members of the anti-immigrant right are once again itching to have their voices heard.

For the second time in just over a week, the Subcommittee has stacked the day with testimony from some of the most hardline immigration opponents in the debate. And if it’s anything like before, what they’ll say will be more of what we’ve come to expect from the anti-immigrant right: worries based more on fear than fact.

The published list of witnesses scheduled to be called for testimony include so-called immigration experts who have spent years demonizing immigrants, warning that they spread disease, take jobs from U.S. citizens and responsible for increases in crime, a dubious fact with little statistical support.

Among them is Sheriff Sam Page of Rockingham County, N.C., a longtime ally of some of the most established anti-immigrant groups in the country, including the Center for Immigration Studies (CIS) and the hate group Federation for American Immigration Reform (FAIR).

This past summer, Page took part in a two day “fact-finding”trip to McAllen, Texas, compliments of FAIR. The trip took place as panic mounted on the right-wing over children escaping violence across Central America and showing up on the U.S. border. He also is a regular attendee at FAIR’s annual “Hold Their Feet to the Fire”event in Washington, D.C., an event that brings together anti-immigrant activists, right-wing radio hosts and politicians to bolster outrage over immigration. 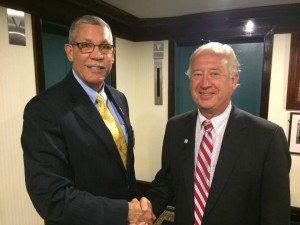 Page has taken part in a number of events organized by the Constitutional Sheriff’s & Peace Officers Association(CSPOA), a group founded by former Arizona Sheriff Richard Mack, a leading figure in the antigovernment movement. At a 2014 CSPOA event, Page was pictured shaking hands with Michael Peroutka, a former board member of the neo-Confederate League of the South (LOS).

Dan Cadman, a CIS senior fellow, and Frank Morris, a CIS board member, are also testifying this afternoon.

Morris has been involved in the anti-immigrant movement for decades, serving on the board of numerous groups including FAIR and Progressives for Immigration Reform (PFIR) — the group he is representing today. He was also led attempts to appeal to the African-American community through the creation of front groups such as the Black American Leadership Alliance (BALA) and its predecessor, Choose Black America (CBA). Both groups, now defunct, sought to divide communities of color over the issue of immigration by promoting the falsehood that immigrants are taking jobs from African Americans.

Though Morris and Cadman do not have a history of racist statements, the organization they both hold title with, CIS, most certainly does.