A young woman from Illinois with an apparent taste for neo-Nazi symbolism and white-supremacist beliefs was one of two people arrested last week in Halifax, Nova Scotia, for plotting to commit a mass murder at a Halifax mall on Valentine’s Day.

Lindsay Kanittha Souvannarath, a 23-year-old from Geneva, Ill., was arrested along with Randall Steven Shepherd, 20, of Halifax, at the local airport after she had flown in to meet him there. According to authorities, she confessed to the plot shortly after her arrest. 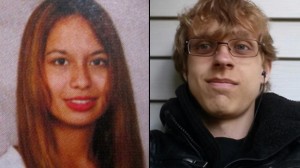 A young man associated with the plot, James Gamble, 19, of nearby Timberlea, Nova Scotia, shot himself in the head as police surrounded his home on Friday morning. A fourth young man was arrested with Shepherd at the Halifax airport and then released after police determined he had nothing to do with the plot.

Canadian authorities said the trio planned to invade a local mall on Valentine’s Day, armed to the teeth, and begin killing as many people there as they could. However, all of the officials involved insisted that it was not a terrorist act, since there was no “cultural” component to the plotters’ motives.

"The attack does not appear to have been culturally motivated, therefore not linked to terrorism," Justice Minister Peter Mackay told assembled reporters at a press conference devoted to the case on Saturday.

However, several Canadian media outlets have questioned this, including Halifax blogger Robert Cevet and Derrick O’Keefe at Ricochet Media, noting that several of the would-be perpetrators, notably Souvannarath, had clear ideological affinities that seemed to motivate them — far-right affinities.

The website Political Gates collected a number of Souvannarath’s online postings from over the years, dating back to when she was a teenager, and found a long list of images and posts that made clear that she advocated fascist and neo-Nazi ideologies, and similarly was a fan of mass violence and fantasized about it. 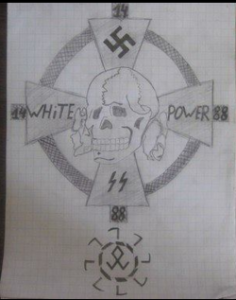 These images included one that she dubbed “me taking notes in class” that was a classic “White Power” logo complete with a swastika and SS symbol. Another photo shows an arm with the bloody words “White Power” carved into it with a razor. Other images include fascist flags over America and young men posing in a swastika shape with their arms. One features Adolf Hitler surrounded by prancing cartoon ponies.

The Internet sleuths at the site Kiwi Farms, where she had at one time been an active member, further tracked Souvanarrath’s activities and ascertained that she had also been an active member at a forum devoted to fascist ideology called Iron March, which is apparently operated by a man named Alexander Slavros.

Nor was Souvannarath the only member of the trio with such leanings. James Gamble’s online postings also included a fascination with mass killings, and some of his Tumblr blog posts contained admiring references to Hitler and Nazis.

Both Souvannarth and Shepherd were initially charged with conspiracy to commit murder. On Tuesday, additional charges came down against the pair, including conspiracy to commit arson, illegal possession of weapons for a purpose dangerous to the public and making a threat through social media.

Souvannarath graduated with a bachelor’s degree in English and creative writing from Coe College in Cedar Rapids, Iowa, in 2014. Her family in Geneva is reportedly cooperating with the investigation.

A former neighbor, Eva Schooley, recalled the woman as a young girl. “My granddaughters ran around with Lindsay,” she said. “Lindsay was a little strange. I think at one point she went kind of gothic on us for a while. She liked to dress in black, the whole gothic style.”

In his denials that the planned mass murder was a terrorist event, Justice Minister Mackay remarked: “An individual that would so recklessly and with bloody intent plot to do something like this I would suggest would also be susceptible to being motivated by groups like ISIS and others. This is the main concern — that any individual in Canada, whatever their motivation or proclivities might be, would also be susceptible to being recruited or radicalized.”

Clearly, these young people had indeed been radicalized, but not by ISIS.