The Conservative Political Action Conference (CPAC), which took place this past weekend in Maryland, is almost always stacked with white nationalists and extremists. And this year was no different, even though American Conservative Union has sought to shun far-right groups and individuals from its event.

From anti-Muslim and anti-immigrant extremists, to the anti-LGBT activists who paraded halls, a good number of groups and individuals still managed to share the spotlight.

Here are some highlights from CPAC 2015:

• As Little Green Footballs reported, the organizers at CPAC gave press credentials and free access to the Tennessee white supremacist radio show Political Cesspool, a radio program that has been nexus of hate in America. Its sponsors include the Council of Conservative Citizens (CofCC) and the Holocaust-denying Institute for Historical Review. 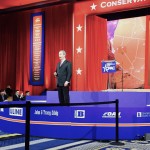 • Nigel Farage, head of the anti-immigrant and right-wing populist United Kingdom Independence Party (UKIP) stated, “We have all in the West mistakenly and I think in a very cowardly manner, we have pursed a policy of multiculturalism. We have pursued a policy of actually encouraging division within our societies rather than pursuing a policy where we should all come together.” Farage went on to say, “We must stand firm and defend our Judeo-Christian culture. We must make it clear that we believe in common law and not Sharia law.”

• Frank Gaffney, one of the leading anti-Muslim voices in the country, also attended the Sessions press conference. Gaffney’s group, the Center for Security Policy (CSP) had a booth in the exhibitor’s hall of CAPC. CSP was also a sponsor of the conference. Clare Lopez, CSP’s vice president for research and analysis, also spoke on two panels.

• Sen. Ted Cruz called for IRS to be abolished and said if he was elected President he would instruct every IRS employee to be stationed on the U.S./Mexico border – remark which received a standing ovation.

• The devil is in the details, or in the case of CPAC, the flyers people hand out. One young person passed out a flyer for the racist website VDARE.com founded by white nationalist Peter Brimelow that advertised his new book Alien Nation and talked about how “the national disaster of mass Third World immigration” would “spell the eventual doom of the American nation.” Another flyer passed out to CPAC attendees warned “We cannot continue to help the world if we are brought to our economic knees by a flood of illegal aliens.” The bottom of the flyer read, “Paid for by Chris Phillips. Not coordinated with any candidate or candidate’s committee.”

• Zuhdi Jasser, one of the few Muslim spokespersons within the anti-Muslim movement, called for America to stand up and defeat ISIS during a panel, claiming that the Muslim world is incapable of dealing with the threat. “Within Islam right now is a laboratory that only breeds cockroaches,” he said.

• White nationalists representing a number of groups participated in a protest outside of the CPAC hotel on Saturday afternoon voicing support for Russian leader Vladimir Putin. Matt Heimbach of the Traditionalist Youth Network organized the protest, which also included members of the Neo-Confederate group League of the South.

• The Convention of States, a project of the group Citizens for Self Government calling for a convention to propose amendments resulting the a reduction of federal powers, also had an exhibitor’s booth at CPAC. Senator Tom Coburn of Oklahoma recently signed on as a senior advisor for the project. Mathew Staver of the anti-LGBT Liberty Counsel is on the Convention of States legal board of reference.

• One U.S. governor, Scott Walker of Wisconsin, compared his state's union protesters to ISIS, stating, “I can take on 100,000 protesters, I can do the same across the world.” Another, Bobby Jindal of Louisiana, used his speech to attack President Obama, claiming the Obama isn’t fit to run the United States as Commander in Chief.