Defying a federal judge’s order, about 40 armed protesters marched onto the outdoor plaza at the U.S. Courthouse in Spokane where one of their leaders was arrested last week for carrying a loaded assault rifle onto federal property – a seemingly scripted event that galvanized concern nationwide from pro-gun, militia and antigovernment groups. 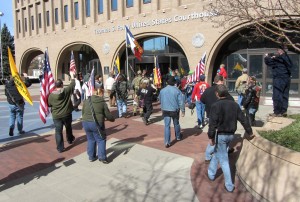 As Bosworth spread out his arms at the main entrance, inviting other armed demonstrators on the sidewalk to join him on the plaza, the Iraq War veteran was greeted by uniformed Department of Homeland Security officers.

But instead of arresting Bosworth as they did last week, the officers told the one-time candidate for sheriff in Yakima, Wash., to have the demonstrators move to the western-edge of the plaza and not block doorways. There were no arrests during the three-hour demonstration, but federal law enforcement agents were present in great number.

The rally supporting Boswick drew nationwide attention from assorted pro-gun groups and antigovernment critics ranging from Alex Jones to Mike Vanderboegh, the self-proclaimed leader of the “III percent” movement, a reference to the alleged number of American colonists who stood up to the British.

The demonstrators were part of the same group that earlier protested a new Washington state gun sale law at the capitol in Olympia. They also champion state’s rights issues and the 10th Amendment, and called the demonstration “Our State, Our Rights.”

It wasn’t immediately known what caused federal authorities to balk and not allow the protest in spite of the issuance of a court order on Monday by Chief U.S. District Court Judge Rosanna Malouf Peterson. A public notice released Thursday by U.S. Attorney Mike Ormsby and U.S, Marshal Craig Thayer said anyone coming on the plaza or attempting to enter the courthouse with weapons or firearms would be subject to arrest for contempt of court and violating federal law.

“We stood up for our rights and they backed down,” Sam Wilson, a spokesman for the Liberty for All group, shouted through a bullhorn to demonstrators. “My fellow patriots, this is only the beginning.”

The crowd cheered and sang “The Star Spangled Banner.” Some waved American flags and the Gadsden flag, frequently used by antigovernment activists who favor its “Don’t Tread on Me” message.

Federal officers were vigilant but made no arrests, making use of snipers with spotting scopes on nearby rooftops and a camera-equipped helicopter overhead.

Those in the group included individual gun-rights activists, military veterans, an ex-Marine in a wheelchair with his service dog, members of Oath Keepers and the 63rdLightfoot Militia battalion from eastern Washington. Some members of the militia group were in combat gear.

Bosworth said federal authorities violated his “God-given birth rights” by arresting him last week for carrying an AR-47 military-style rifle, and that Friday’s demonstration — with no arrests for the same conduct — underscored “the unlawfulness and stupidiy” of that action.

Bosworth was issued a misdemeanor citation for last week’s acts by DHS officers and deputy federal marshals seized his assault rifle and a handgun.

“I want those arms back,” Bosworth told the crowd. “They not only violated my rights, they violated yours.”