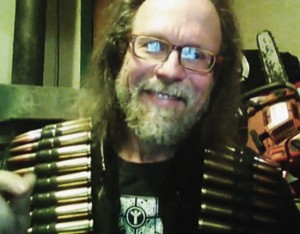 The well-known white supremacist and anti-Semite, who garnered national attention after attempting to take over the small town of Leith, N.D., took to Stormfront this morning to gleefully announce that he had disproven the “junk science” test in November of 2013 that put his pedigree in question.

In that test, the results of which were televised on the Trisha Goddard Show, Cobb was found to have 14 percent sub-Saharan African genes –– a fact he dismissed as “statistical noise.”

Apparently, Goddard’s big reveal to Cobb that, “You have a little black in you, bro!” had been eating away at the would-be mayor of “Cobbsville” for some time.  So much so that Cobb had a second test completed that showed he was pure white, except for a “3% Iberian thing.”

“I’d appreciate it if honorable men will stop calling me 14% black,” Cobb pleaded today on Stormfront. “I wish my Wiki could get edited. … They currently have me listed as part African American. More Jew lies. I hope you can now see that at this late date in the matter.”

In his lengthy post announcing his newly discovered whiteness, Cobb goes on to thank a laundry list of white supremacist leaders “for supporting [him] from the inception when [he] was defamed by junk science.”

Without their support, who knows whether Cobb could have found the strength to persevere and keep buying genetics tests until he could finally, indisputably prove that he is in fact white.