In the past decade, David Joseph Lenio has gone from a Michigan high school cross-country runner called “Dave” to a hate-filled accused criminal who told the world on Twitter: “I am a potential terrorist. I know the truth about 9/11.”

Along the way, he also expressed the desire to shoot a rabbi in the head, shoot 100 schoolchildren and engage in a shootout with police in order to end his life in a “suicide by cop.”

Before he could fulfill his threats, Lenio was arrested Feb. 16 at a Montana ski resort — a day when schools were closed for the President’s Day holiday – just one day after he taken two of his rifles and a quantity of ammunition out of a storage locker in Kalispell, Mont.

Today, the 28-year-old graduate of Forest Hills Northern High School, in Grand Rapids, Mich., will be led in handcuffs from a jail cell in Flathead County, Mont., to a courtroom. 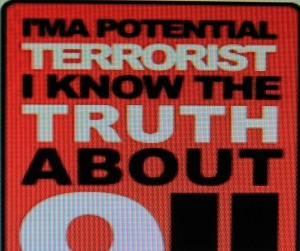 Twitter avatar used by David Lenio: "I'm a potential terrorist. I know the truth about 9/11."

Lenio is scheduled to be arraigned before District Court Judge Heidi J. Ulbricht — herself a mother — on two felony charges, intimidation and criminal defamation, for using his Twitter accounts to publish assorted death threats.

Deputy Prosecuting Attorney Stacy Boman told Hatewatch she will ask that Lenio remain in jail under a $500,000 bond until he stands trial.

Court documents detail the chilling threats allegedly made by Lenio.

“I bet I could get at least 12 unarmed sitting ducks if I decide to go on a killing spree in a #school Sounds better than being a wage slave,” Lenio wrote on Twitter on Feb. 12, the court filings allege.

“What do you think costs more in most U.S. cities? A gun with enough ammunition to kill 100 school kids or the security deposit on an apartment,” he posted later. A short time after that, he wrote: “What would I rather do? Be a #wage slave for the rest of my life or tell society f--- you & do your kids a favor by shooting up a #school?”

On Feb. 14, after sending tweets filled with anti-Semitic comments and expressing a desire to copy other mass shootings, Lenio wrote: “I bet I’d take out at least a whole #classroom & score 30+ if I put my mind to it #Poverty is making me want to kill folks #mental health’#

That was followed by this: “This working and not have a god damn thing to show for it [is] bullshit [and] makes me wanna execute grade #school #kids til the cops take me out too.” He also wrote about his hatred of Jews and called the Holocaust a “lie beyond a reasonable doubt. It is now time to hunt the Nazi hunters.”

When Twitter spotted his hateful messages in January, the social media provider shut down Lenio’s account, but he opened another, then another, mockingly displaying the ease with which he worked around Twitter’s policing.

Some of the 90 tweets Lenio fired off in mid-February came in response to an anti-gun violence tweet by Jonathan Hutson, a spokesman for the Brady Campaign to Prevent Gun Violence. Hutson provided information to state and federal authorities that led to Lenio’s arrest.

Since then, Hutson has dug through Internet and social media archives, compiling a more detailed picture of Lenio. Those details, provided to Hatewatch, show Lenio was a cross-country runner known to his friends as Dave, who graduated from Forest Hills Northern High School in Grand Rapids, Mich., in May 2004.

Five years later, Lenio left Michigan for reasons that aren’t publicly known. His social media posts say he loaded clothes, a sleeping bag and tent into his Chevrolet Cavalier in July 2009 and drove from Michigan to Denver with $400 in his pocket. He hoped to find work as a cook and to snowboard in the Rockies.

Because he had no place to stay, he would pitch his tent, sometimes at Chief Hosa Campground in Denver’s Genesse Mountain Park, where he would pay $20 a night. Sometimes, Lenio explained on social media, “I would camp out illegally in my tent. I’m a f-----’ lawbreaker, I guess.”

In September 2011, on the 10th anniversary of the Al Qaeda terrorists attacks, Lenio posted a YouTube video “Channel Surfacing for 9/11 Truth,” suggesting Israelis and “some factions of the U.S. government” conspired to carry out the mass murder, The Missoulian reported Wednesday.

In October 2011, other social media postings show Lenio participated in and made cell phone videos of Occupy Denver protests, posting some of those on YouTube. All told, he made more than 70 YouTube videos, posted under the alias “David Dave.” By 2011, he was living in an apartment in Denver but expressed anger at law enforcement for dispersing participants in an Occupy Denver tent city.

Between October 2009 and November 2012, Lenio worked seasonal jobs at a Colorado ski resort and opened a Twitter account with an avatar that said: “I am a potential terrorist. I know the truth about 9/11.”

Last December, social media postings show Lenio moved to Kalispell, where he rented a storage locker and shared an apartment with a roommate. On Dec. 30, he tweeted: “I David Lenio as literally so indebted & #underpaid that I want to go on a sandy hoax [a evident misspelled reference to the 2012 Sandy Hook Elementary School massacre] style spree in a Kalispell, MT elementary #school 2014.”

After his arrest, court documents say, Lenio “admitted to sending out the messages and stated that he was trying to bring attention to certain social issues. Lenio asked if his recent messages had affected schools and if law enforcement had been more active at schools. Lenio stated that he was glad that he was having that effect.”

On Feb. 16, officers conducted a search of his residence and found a Russian-made bolt-action rifle and a 9mm semi-automatic rifle, along with ammunition for both weapons, and a .32 caliber handgun. That semi-automatic pistol with a round in its chamber was found during a police search of Lenio’s vehicle. Court documents disclose that police also found a mattress, a plastic bag of marijuana and a pot pipe and several jugs containing urine.

Hutson told Hatewatch: “Lenio has a right to his wrong-headed conspiracy theories and bigoted opinions. But he has no right to threaten to execute grade-school kids and Jews.”

“When he fetched his guns and ammo after threatening to shoot up a school and die in a hail of bullets in a suicide-by-cop scenario, he showed himself to be a danger to others and himself. And then there's the question of why he was hauling around jugs of urine in his van.”