An antigovernment extremist who espoused killing police officers, judges and using napalm to burn down a county courthouse has been arrested in Montana after buying a fully automatic shotgun during six-month FBI sting. 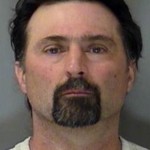 William Krisstofer Wolf, 52, who broadcast his extremist views on a weekly webcast called “The Montana Republic,” was arrested Wednesday by FBI agents in Livingston, Mont., after paying $725 and taking possession of a sawed-off, fully automatic Russian Saiga-12 shotgun capable of shooting 10 rounds in two seconds, court documents say. His arrest came without incident.

The case will be presented to a federal grand jury for indictment while West remains in jail without bond on a charge of possession an illegal fully automatic machine gun.

Wolf allegedly expressed a desire to buy the illegal gun during a series of meetings he had, beginning last November, with an FBI informant who introduced Wolf to an undercover FBI agent, the documents say. It’s likely those conversations were secretly recorded by the FBI, although that’s not specifically detailed in public records.

During those meetings, Wolf also discussed building a “blowtorch gun” with a range up to 150 feet “for the purpose of protection against law enforcement officers wearing body armor.”

The court documents also say Wolf discussed using his blowtorch gun to destroy a “BearCAT” armored vehicle recently acquired by the Bozeman Police Department for use in SWAT operations. He allegedly said the most-effective way of destroying the police armored vehicle “would be cooking it from the inside.”

As the FBI continued monitoring West’s activities, agents learned that possession of the type of flamethrower described by Wolf wouldn’t violate federal law, the court documents disclose. But during those discussions, they say, Wolf also expressed his desire to acquire the Russian-made fully automatic shotgun.

Wolf began broadcasting “The Montana Republic” in November 2013 “to bring like-minded Patriots from across the country” together to discuss ways to counter local, state and federal officials who Patriots consider to be “overstepping on constitutional rights,” the documents say.

In several of his webcasts, West talked about “taking out bridges or power grids and seizing law enforcement vehicles and weapons,” they say.

“Over the next 12 months, Wolf repeatedly espoused his contempt for local judges, law enforcement, the county attorney, city and county commissioners and agents and agencies of the federal government,” the documents say.

When a “sovereign citizen” was arrested in Montana, Wolf urged his fellow Patriots to make citizen’s arrests of judges involved in the case and “stated his intention to use a means of force if necessary.”

“As it sits folks, please understand, I firmly believe that all agents of the government, all judiciary, and all police officers are targets,” he said on the broadcast.

At a Patriots “committee of safety” meeting that Wolf hosted in late January, he discussed destroying the Gallatin County Courthouse in Bozeman, Mont. “My preferred method, I’m serious … would be to drop 500 pounds of napalm through the roof of the courthouse and burn it to the ground and roast some marshmallows on it.”

“I don’t believe in doing anything that’s not extreme and right now, wiping that place out would be my extreme movement and then my next [question] would be, ‘OK, which county, city building is going to be next?’”

When someone in the group urged West to exercise restraint and caution, the court documents say, he responded that if “they wanted to put him in jail, they had better bring a coroner and several body bags.”