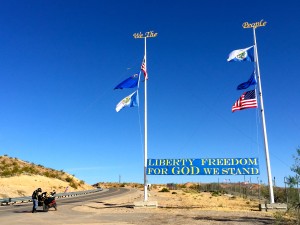 Will Michael, 24, pleaded guilty this week to threatening a federal law enforcement official as well as making interstate communication threats, the Los Angeles Times reported on Thursday. He will be sentenced in July.

While Michael did not travel to Nevada during the April 12, 2014, standoff, he did leave a profanity-strewn telephone message with Mike Roop, the chief Bureau of Land Management (BLM) ranger for Washington and Oregon, in which he said, “We’re going to kill you,” according to federal court documents cited by The Times.

Bundy, who last weekend celebrated the anniversary of his standoff with BLM agents, seemed concerned that this would send a troubling message to his supporters. Michael is the first person arrested or charged in connection with the Bundy case, despite widespread calls across the nation for justice.

“I’m concerned,” Bundy told the Times. “It looks to me like they’re looking for someone easy to pick on. This guy was back in Pennsylvania. He wasn’t even out here in Nevada. I don’t even know what he said.” He added, "It sort of seems like this could be the government’s first move – I hope not."

After the standoff, the Southern Poverty Law Center released a special report that, based on interviews with militia commanders on scene that day, documented a plan to coordinate the dozens of militias that responded to Bundy's call for help, the Bundy family and other supporters to face off with the BLM.