So much for a repeat of the Bundy Ranch standoff. 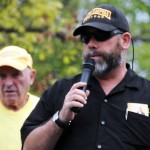 A collection of antigovernment “Patriots” gathered Thursday in the parking lot of the Bureau of Land Management (BLM) office in Medford, OR, to protest what they believe was the federal government’s “tyrannical” treatment of miners in the region.

But the organizers of the affair were adamant they were uninterested in a standoff with federal authorities similar to the confrontation between BLM agents and hundreds of heavily armed “Patriots” a year ago at Cliven Bundy’s ranch in Nevada. All they wanted, organizers claimed, was to defend ordinary citizens from federal abuses.

“You have untrained people, uneducated people, throwing around their weight, abusing people who are trying to earn a living, and they think it’s OK,” Joseph Rice, coordinator for the Josephine County chapter of Oath Keepers, told about 50 people gathered. “I took an oath to uphold the Constitution against enemies foreign and domestic, and a domestic enemy is anyone who will abuse someone’s rights within that Constitution.”

Rice added, “Today it is the BLM, because they did not allow the due process to occur. They need to seriously look at their administrative process and procedures and address that. It’s a cultural issue. We saw it a year ago. Here we are again today. It doesn’t seem to be willing to change or improve that.”

At issue is a dispute between the BLM and the owners of the Sugar Pine Mine near Merlin, Ore., who were given a “letter of noncompliance” last spring telling them they either needed to clear out of the mine within 60 days or file an appeal of the ruling that they were not in compliance with BLM mining regulations.

What followed was a nationwide call to help defend a couple of Oregon miners in imminent danger of having their constitutional right to due process destroyed by the BLM, according to the local chapter of the Oath Keepers that made the plea. And they called it a “security operation” because owner Rick Barclay insisted that the BLM was notorious for burning down miners’ cabins in the backwoods, and he believes they would have destroyed his mine if he had not called for help.

BLM spokesman Jim Whittington told Hatewatch that these were absurdly groundless fears. “The idea that we would go in on Friday and wipe everything off the claim is just not true,” he said. “It has no basis in reality.”

There were few guns on display, and no threats or intimidation. A large group of black-clad “III Percent” movement followers from Idaho made their presence known, but the crowd and the speakers remained relatively sedate. Even with such sedate activists, the BLM and the U.S. Forest Service closed their joint offices as a precautionary measure. Only five people spoke, including both of the mine owners and two local Oath Keepers. Within an hour, everyone was gone.

The issue persists, however. The miners and the “Patriots” insist the BLM’s issuance of a letter of non-compliance amounts to a denial of due process, and the Oath Keepers have insisted their presence is about “defending the Fifth Amendment rights” of the miners.

Rick Barclay, one of the mine owners, told Hatewatch that the BLM had violated his due process in the letter. “They short-circuited the due process by telling me I have to remove my equipment before I ever even get a hearing,” he said.

However, the letter of noncompliance is clear that removal of the cabin and equipment are only among the mine owners’ three options, and says at the end: “If you do not agree and are adversely affected by this decision you may ask for a review by the State Director … or you may appeal to the Interior Board of Land Appeals.”

Barclay filed paperwork in his appeals process on Wednesday, but indicated that he hoped the Oath Keepers would stay on site until he actually has a hearing. “After I get my day in court and get a stay, then they will go home,” he said. “Just because I turned in my paperwork doesn’t mean the BLM won’t come up there tomorrow and set everything on fire.”