It appears that Jeff Rense’s radio show has been pulled from the line up of the Global Star Radio Network (GSR), which provided Rense with access to the Galaxy 19 satellite. As of today, Rense’s program is no longer listed as being aired, according to the GSR schedule (SPLC will verify whether the program has stopped broadcasting by listening to the satellite feed). Also, none of the other programs that run on Rense Radio Network, such as The Pete Santilli Show, appear any longer on GSR’s schedule.

GSR’s satellite had streamed the programming across North America. Yesterday, the Southern Poverty Law Center (SPLC) contacted GSR to ask whether they were concerned about running Rense’s program on Galaxy 19. That satellite is owned by Intelsat, which is headquartered in Luxembourg. That country has a law against Holocaust denial, an activity that Rense regularly engages in. GSR did not respond to the SPLC’s emails.

Earlier this week, the SPLC posted audio excerpts documenting Rense’s anti-Semitism and Holocaust denial. Another SPLC report detailed Rense’s celebration of Hitler’s birthday on April 20 as well as other extremism pushed on his program and website. None of this slowed down Rense’s Jew-bashing. After disgustingly posting a celebratory piece about Hitler’s accomplishments last weekend, a new anti-Semitic illustration (seen below) went up this week. 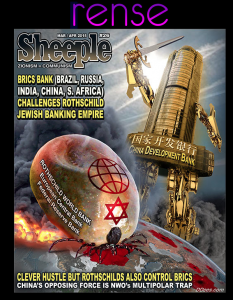 GSR’s deletion of Rense from their line up comes in the wake of the company’s decision earlier this month to drop programs run by former Klansmen David Duke and Don Black, whose shows are part of the Rense Radio Network. That apparently happened after GSR’s European satellite provider, Eutelsat, dropped GSR as a client because those programs were filled with hate speech that violated European laws. That left GSR with only its North American satellite Galaxy 19.