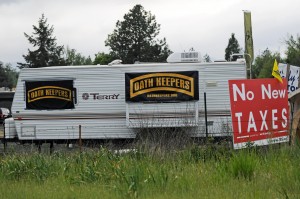 It wasn’t exactly a black helicopter, but it was close enough to spook the Oath Keepers keeping watch on the Sugar Pine Mine in southern Oregon.

Someone flew a private helicopter over a tract of land near the mine north of Grants Pass last week and set off a panic among the assembled “Patriots” – Oath Keepers, so-called “III Percenters,” and various other militiamen. And somehow, in militialand, this translated into a certainty that not one, but three helicopters were circling the mine and the Bureau of Land Management (BLM) was bringing in “troops.”

The militia gathered issued a coded call to arms, bringing the entire collection of would-be defenders rushing to the armed encampment’s staging area near the town of Merlin, bristling with guns and ready for action.

“THIS IS NOT A DRILL. CODE WORDS HAVE JUST BEEN GIVEN THAT OR MINE IS IN DISTRESS. ANY PATRIOTS IN THE AREA. ROLL OUT. ANYONE WHO CAN GO BETTER” read the callout on Facebook.

But according to Josephine County Sheriff Dave Daniel, it was all a false alarm. The helicopter did not belong to the BLM or any government agency, but instead was privately owned. It was landing on a mountain far from the Sugar Pine Mine.

Daniel told the Grants Pass Daily Courier that Oath Keepers leader Joseph Rice personally checked on the reports about the supposed three helicopters circling the mine and found nothing to them. Rice told his compatriots on the ground to “stand down.”

The armed encampment is already something of an exercise in groundless paranoia. The collection of “Patriots” are there because they believe they need to protect the mine’s owners – Rick Barclay and George Baskes – from having their property destroyed by the BLM while the question of the surface rights to the mine are being adjudicated. A nationwide callout went out among Oath Keepers two weeks ago, on the anniversary of the Bundy Ranch standoff, bringing a collection of militiamen from around the country to the little Oregon town of Merlin.

However, while the BLM has in fact burned down old mining cabins in the region after it has obtained a court order enabling it to do so, there is no record of it having done so while the issue was still in court.

Yet despite being in the midst of a lengthy due process over their mining rights, the mine owners insist they need the Oath Keepers’ presence to keep the BLM from coming in and destroying their property while they are in court. The Oath Keepers in turn proclaim that they are there to protect the miners’ “Fifth Amendment rights to due process” from being violated. The BLM, for its part, denies it has any intention on attempting to remove the miners from their claim while the matter is in court.

The paranoia at the camp has been ratcheting up steadily. A series of bulletins issued from the camp and published at a Patriot website have focused on the militiamen’s beliefs that the BLM had sent in a squad of mercenaries who were preparing to wipe them out.

The security operation underway at the Sugar Pine Mine, outside of Grants Pass, Oregon has gone from a simple site security operation to possibly a defensive detail. The reason stated for the change to the operation comes from the confirmation that BLM brought in private, armed military contractors and set up a 24 hour surveillance team to openly watch the command center located next to Interstate 5 in Merlin, Oregon.

The important distinction to make is that these people are not law enforcement officers but private contractors. Hired guns to put it quite simply. Oath Keepers has not escalated any activity so the question must be asked, why did BLM bring in these people if they do not intend to use the resources? Why are they in Grants Pass, Oregon? The situation has gone from a peaceful resistance to one that potentially becomes volatile in nature.

Later, the reports calmed down somewhat: “Much speculation has been undertaken regarding the scope and purpose of these security contractors. At this time, the Oath Keepers Josephine County wishes to express no opinion on the matter of the purpose of the armed contractors. They are under observation and no action is being taken beyond that.”

The incident with the helicopter followed shortly.

Local residents have already held a press conference asking for the armed encampment to disband and go home because of the fearfulness they bring to their community.

Sheriff Daniel – who is himself a member in good standing of Richard Mack’s Constitutional Sheriffs and Peace Officers Association, which is allied with the Oath Keepers – told the Courier that the episode is “exactly the type of incident he’s been fearing ever since Oath Keepers issued a national callout earlier this month.”

“I want everybody to understand that things like this are dangerous,” he said, adding, “You never know what could happen in an accident.”