Hardline anti-abortion activist Otis O’Neal “Neal” Horsley, Jr., perhaps most famous for compiling a public collection of dossiers called the “Nuremberg Files” on abortion supporters and providers, has died. He was 70.

According to a post on his Facebook page, Horsley died “peacefully while surrounded by his family,” on April 13, 2015, in Carrollton, Ga. A cause of death was not announced, but social media posts last December and November asked for prayers to heal Horsley and another made reference to liver disease.

Horsley’s ideological beginnings stood quite apart from his right-wing activism. 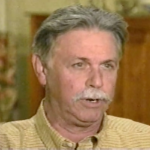 Born in Bremen, Ga., he grew up in Bowdon, near the Alabama border. Following four years in the Air Force during the Vietnam era, he became a strident opponent of the war and ended up in San Francisco in 1967, where he plunged into the counterculture and developed an obsession with marijuana.

When he moved back to Georgia two years later, he dealt pot but quit after he met his future wife, a 16-year-old runaway living on the streets of Atlanta. They married in 1969. But he would later serve a 30-month stint in federal prison in 1973 for possession of three gallons of hashish oil.

While in prison, Horsley got involved with Watergate felon Chuck Colson’s ministry, “Prison Fellowship.” There, he “surrendered to Jesus” and began a new chapter in his life – one that would lead him to become a contentious figure among anti-abortion extremists and a celebrity to younger activists who found his ribald humor and back-slapping persona a refreshing contrast to the staid conservatives leading the anti-abortion movement.

After prison, in 1979, Horsley became Colson’s Southeastern director and moved to Philadelphia to attend Westminster Theological Seminary, whose founder, J. Gresham Machen, had been expelled from mainstream Presbyterianism in 1936. While at Westminster, Horsley underwent his abortion epiphany.

“I was in Hebrew class one day and we were translating the 106th Psalm. It's basically a history of Israel, and we got to the part where they sacrificed their sons and daughters unto idols, and therefore God let their enemies come and rule over them. I'm sitting there and all of a sudden I had this thing come over me. ... It was as powerful a thing as I've ever experienced,” Horsley told Atlanta magazine in 2001.

After graduating, Horsley plunged headlong into anti-abortion extremism, writing several manuscripts that he would self-publish years later and getting to know a number of the leaders of Operation Rescue, the group known for blockading women's clinics. During that time, he also met anti-abortion terrorist Paul Hill, with whom he spoke just days before Hill assassinated Dr. John Britton and his escort outside a Pensacola, Fla., clinic in 1994.

By the mid-1990s, Horsley was espousing Christian Reconstructionist views and began warning of impending Armageddon on his website, which he launched in 1995. There he published his writings on a variety of subjects, from essays in which he called for the arrest of “f------” to diatribes about abortion. In one section, the “Desecration Digest,” he posted graphic pornographic photos meant to illustrate America’s moral degeneracy. One essay called for Georgians to secede in an attempt to force other states to outlaw abortion. Most of his websites also include photographs of mutilated fetuses.

By 1997, Horsley was running for governor in Georgia on the so-called Creator’s Rights Party ticket and working as a computer consultant. That year, he also attended the White Rose Banquet in Washington, D.C., an annual gathering of the most violence-prone anti-abortion activists in the country. There, Horsley met radical anti-abortion activist Paul deParrie, whose group the American Coalition of Life Activists (ACLA) had compiled dossiers on abortion providers.

DeParrie gave Horsley a box of these dossiers -- the so-called Nuremberg Files -- and within weeks, Horsley had organized them and posted them on his website. The files supplied the names and other details about dozens of doctors, health care providers, politicians, and judges who supported abortion rights. Later, Horsley included a list of providers who had been wounded (these he denoted by graying the names out) and those who had been killed (these he denoted with a line through the name).

As a result, Horsley would end up being included as a co-conspirator in a lawsuit originally filed in 1995 by Planned Parenthood against ACLA. His website was added after the lawsuit's filing to a list of offending materials in pre-trial discovery. Planned Parenthood claimed that the posted dossiers were a threat, and the group won an initial verdict of $109 million in 2001, but a three-judge federal court overturned the verdict that same year after appeal, saying the dossiers were protected by the First Amendment and could remain online.

Planned Parenthood then appealed that ruling. In 2002, the 9th Circuit Court of Appeals heard the case again and ruled that Horsley’s website and other “Wanted” posters created by anti-abortion activists were not protected speech and were a threat. In response, Horsley said, “I am going to have to add six more bloody baby butchering judges to the Nuremberg Files.”

The verdict didn’t stop him. In 2001, he launched abortioncams.com to publicize photographs of patients outside abortion clinics. “There are words for what a mother does when she kills her unborn child for any reason other than clear and present self-defense,” Horsley wrote on the site. “[These] homicidal mothers must be held up for the world to see.”

And he kept his hand in politics, running for governor of Georgia again in 2010 (unsuccessfully). He was also arrested that year for making "terroristic threats" against singer Elton John (a judge dismissed the charges). None of these things seemed to slow him down, and he kept busy with his extremism close to the end. In February, for example, he posted a link to one of his sites on Facebook that takes viewers to a 3-page "comic" in which an anti-abortion character with the head of what appears to be a barely-formed bloody fetus decapitates a woman who had gotten an abortion. "God's law will be enforced," he said in part of his status update.