English professor Lee Bebout intended to be thought-provoking when he offered a course at Arizona State University (ASU) titled “Race Theory and the Problem of Whiteness.” He had no idea that it would also provoke the wrath of, first, Fox News viewers, and then, white supremacists, sparking protests on campus, and yet ultimately drawing the explicit support of ASU administrators. 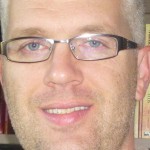 But that’s what happened after Bebout listed the course for ASU’s spring semester. Now, having survived a barrage of hate mail and protests, he can only say he’s relieved the ordeal appears to be over.

“I’ve been a lot less stressed lately,” he told Hatewatch. “There were moments of anxiety in the beginning of all this, but once I got support from folks, the anxiety subsided tremendously.”

The problem began a little while after the course was listed, when an ASU student named Lauren Clark wrote a blog post for Campus Reform, a right-wing organization founded by David Horowitz and Morton Blackwell’s Leadership Institute. The institute is devoted to policing American campuses for “the conduct and misconduct of university administrators, faculty, and students.”

The next day, Clark appeared on Fox News with host Elisabeth Hasselbeck to attack Bebout’s course in more explicit terms.

Clark and Hasselbeck listed the texts — which included such titles as The Possessive Investment in Whiteness, Critical Race Theory, Everyday Language of White Racism, Playing in the Dark, and The Alchemy of Race and Rights — and Clark said they suggested a trend: “All of these books have a disturbing trend and that’s pointing to white people as a root cause of social injustices for this country.”

“Clearly we have a lot of work to go, as a society, in terms of racial tension,” Clark continued. “But having a class that suggests an entire race is the problem is inappropriate, wrong, and, frankly, counterproductive. I wonder what students like myself are taking out of this course when they learn all about all this negative racial tension out in society. There’s a lot of negative implications here.”

In reality, the course is a fairly standard academic study of race in modern society. As ASU administrators explained at the time the controversy erupted: "This course uses literature and rhetoric to look at how stories shape people's understandings and experiences of race. It encourages students to examine how people talk about – or avoid talking about – race in the contemporary United States. This is an interdisciplinary course, so students will draw on history, literature, speeches and cultural changes – from scholarly texts to humor. The class is designed to empower students to confront the difficult and often thorny issues that surround us today and reach thoughtful conclusions rather than display gut reactions. A university is an academic environment where we discuss and debate a wide array of viewpoints."

Within hours of the segment having aired, Bebout and ASU were barraged with hate mail from around the country. Some of the messages included threats; one of special note contained a cryptic religious message suggesting the professor deserved to be murdered.

But that was just the beginning. A short time later, members of a neo-Nazi youth organization called the National Youth Front (NYF), a youth-oriented arm of the white nationalist organization American Freedom Party, began plastering the ASU campus with flyers featuring Bebout’s portrait and the stark label “Anti-White.” They also went to Bebout’s neighborhood and distributed them there.

An NYF spokesman, Angelo John Gage, told Talking Points Memo that their “Operation Bad Teacher” program targeted Bebout because his course was “racist.” (Gage himself has a long history of racism and anti-Semitism, including stints on The White Voice, a white nationalist website, and Stormfront.) He also claimed none of his members had threatened Bebout.

"No longer will we have our identity destroyed and our people defamed," declared NYF's website. "This week, several of National Youth Front's members went to ASU to raise awareness that we will no longer tolerate this antiwhite agenda. Over four hundred flyers were delivered over several days to both Lee Bebout's neighborhood and ASU." A local NYF member who called himself “John Hess” admitted to being the person seen in a video promoting the campaign.

Early in March, when ASU students organized a protest in support of the embattled professor Bebout’s course, as well as the work of an associate professor at the school named Robert Poe, “Hess” and a cadre of like-minded right-wing extremists showed up on the ASU campus to counter-protest. While Bebout maintained a low profile throughout the ordeal, Poe went out and confronted his antagonists face to face.

University administrators at the time remained mostly mum in the face of the controversy, leading some academics from other schools where similar courses are taught to wonder why Bebout had been “left out to dry.”

“I haven’t seen the administration come to his defense in the way that I would expect any university to do when an employee and his family are facing death threats,” Purdue University professor Bill Mullen told TPM.

But recently, the ASU administration has emerged from its shell to offer a robust defense – and expressions of support – for Bebout and the course.

ASU President Michael Crow told the student paper, the State Press, that he and a vice provost both examined the course carefully and found that it was well within the framework the school hoped to offer academically.

“[The] course looked like a pretty good critical thinking course to me,” Crow said. “It looked like it was doing what it was supposed to do, which is to deal with a complex subject through literature and get students interested in talking and writing and thinking about that complex subject.”

ASU administrator James Rund co-authored a letter that appeared in The Arizona Republic condemning recent manifestations of racist hate groups: “There have been a series of hate speech incidents over recent weeks in Tempe and Mesa, orchestrated by Neo-Nazi groups and hate preachers. Some of the incidents included anti-Black, anti-immigrant, anti-LGBT and anti-Muslim speech and intimidation. This behavior and these sentiments do not reflect the values of our community.”

Bebout said the community support he’s received has been tremendous. “It’s been really amazing,” he said. “Obviously people at ASU have been solid, but people from all over the country (and other countries) who do this sort of work or see a value in it have reached out as well.”

Bebout told Hatewatch that he would be offering the course again in the future, likely in Spring 2016, with some adjustments: “I’ll be tweaking the syllabus a bit now that I had a chance to give it a run through with undergraduates.”

He noted that many observers of the interaction between mainstream conservatism and far-right extremism have focused on how white supremacists “code and frame their rhetoric in ways that make them acceptable to mainstream news sources.”

“My situation seems to show that the inverse is also true,” Bebout noted. “Fox News, Campus Reform, and other organizations give cover and provide ‘research’ and ‘facts’ for white supremacist groups.”

Bebout explained that he and a graduate student had been carefully following white supremacist/nationalist sites even before the controversy erupted, and particularly afterward.

“Since my class came under the attention of white supremacists, I noticed that NYF and other groups regularly post stories from Fox News and Campus Reform as ‘proof’ for their ideology,” he said. “While these outlets like Fox News and Campus Reform certainly use different rhetoric than National Youth Front, it would be erroneous to say that they are completely separate discursively or ideologically (one being colorblind and the other being explicitly racist). Indeed, I am fascinated with how much they share in common in terms of rhetoric and ideology.”