A group of Muslim school children in upstate New York has a heartbreaking question for a Tennessee man they have never met, but who haunts their dreams.

In big letters on a large banner, they ask, “Why Do You Want To Kill Us Robert Doggart?”

Doggart, an allegedly ordained Christian minister who came in third last year in a Tennessee congressional race, is awaiting sentencing in federal court after recently pleading guilty in a plot to destroy with fire and guns the small Muslim community where the children live, worship and attend school. 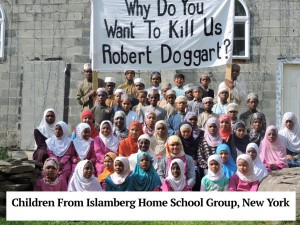 Courtesy The Muslims of America Inc.

When the 63-year-old wannabe Tennessee terrorist was arrested by FBI agents in his home state this spring, he was trying to recruit via cellphone and Facebook a militia of “patriots” to attack the enclave of mostly African-American Muslims near Hancock, N.Y., known as “Islamberg.”

He planned to burn to the ground the mosque, school and cafeteria, according to a federal complaint. Anyone who fought back would be gunned down by Doggart and other snipers using M4 rifles or, as Doggart allegedly told a confidential informant, “we will cut them to shreds” with machetes.

For years, Islamberg has been dogged by radical-right conspiracy theories and claims, alleging that it is one of a string of secret jihadist training camps in the backwoods of America. There is at least one YouTube video making such a claim. According to one totally baseless rumor, Osama bin Laden went into hiding in Islamberg after the 9/11 attacks.

A local deputy sheriff in Delaware County told a radio show in January that he was “perplexed” about the Islamberg rumors, adding that he and other deputies had been on the property on a number of occasions and that “nothing that we have developed or had contact with has made us believe there is any credit to those videos.”

Doggart, according to the plea agreement, “justified his attack on Islamberg by claiming that the residents of Islamberg were planning a terrorist attack.”

In a Facebook posting in February, according to federal prosecutors, Doggart wrote, “Target 3 [Isamberg] is vulnerable from many approaches and must be utterly destroyed.”

In another post he declared, “Our small group will soon be faced with the fight of our lives. We will offer those lives as collateral to prove our commitment to our God.”

During a telephone call recorded by federal agents, prosecutors say, “the defendant suggested” that “he and his group would kill some residents of Islamberg in order to carry out the plan.”

“We will be cruel to them,” Doggart vowed.

Doggart, who claims to have a doctorate in business administration from LaSalle University, was arrested on April 10. Two weeks later, he pleaded guilty to one count of interstate communication of threats. He is out on $30,000 bond awaiting sentencing, and faces up to five years in federal prison and a fine of $250,000.

“Doggart is an example of the results of unchecked and rampant Islamophobia which has spread lies for years about our peaceful community,” the Muslim enclave’s spokesman, Muhammad Matthew Gardner, said in a written statement. He added “All would agree, if a Muslim did this, the perpetrator would be immediately identified as a terrorist then prosecuted to the fullest extent of the law.”

The authorities notified the leaders of Islamberg of the plot some time ago, according to Gardner, and they have “worked with state and federal officials to provide residents with round the clock security.”

Still, he said, “Our children do not feel safe.”

Islamberg, which is about three hours north of New York City, was founded in the early 1980s by a few dozen largely African-American Muslim families reportedly seeking to escape the hustle and bustle and crime of the city. Islamberg is part of a larger group of sister communities scattered across the country called The Muslims of America Inc.

Gardner said in the statement that the arrest and guilty plea of Doggart “matches an increase in unwelcome strangers visiting properties of The Muslims of America in South Carolina, Texas and other states.”

“What other murderous plans do he and his private militia (also known as American Taliban) have,” Gardner continued, “and where are his accomplices?”

Doggart is a white-haired grandfather and has worked for 40 years in the engineering field, including at the Tennessee Valley Authority, according to a defense document. He suffers, the document adds, from a “combination of impairments,” including “physical and mental impairments.”

Last year, Doggart ran for United States Congress in the 4th Congressional District of Tennessee. He came in third with about 9,000 votes. Also last year, Doggart traveled to Washington, D.C., and joined a group of law enforcement officers who subscribe to far-right “constitutionalist” theories. They were protesting President Obama’s immigration polices.

A small group of protesters supporting the lawmen gathered in front of the White House and began shouting slogans, demanding the removal of Obama. Doggart addressed the group, using a bullhorn, although there appeared to be no more than two dozen people in attendance.

“The president of the United States is guilty of treason to the constitution,” Doggart said, adding that he was from Tennessee and “[w]e will never give up our guns.”

Some in the crowd demanded the president be lynched.

Sometime after that display, federal agents “learned that Doggart associates with various ‘private militia groups,’” according to the complaint.

By mid-March, agents were intercepting his telephone calls and listened in as
“Doggart solicited others to join his plan to attack Islamberg.”

“We shall be Warriors,” he wrote on Facebook, “who will inflict horrible numbers of casualties upon the enemies of our Nation and World Peace.”