A man who led a Christian Identity cult and was involved in two torture murders in 1985 died over the weekend of apparent natural causes while he waited on death row in the Nebraska state prison system. 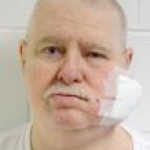 Michael W. Ryan, 66, a one-time follower of Posse Comitatus leader James Wickstrom, died Sunday evening at Tecumseh State Correctional Institution where he had been since 2001 when death row inmates were moved there from the Nebraska State Penitentiary in Lincoln, the Lincoln Journal Star reported.

Ryan had been undergoing treatment for terminal brain cancer, the newspaper reported.

Ryan was sentenced to death for the 1985 sexual torture and mutilation murder of 27-year-old cult follower James Thimm and 5-year-old Luke Stice. Their bodies were discovered that same year in shallow graves by authorities during a raid of the cult’s compound, set up on a pig farm in Rulo, Neb.

The 20-member group was led by Ryan, who had four wives and called himself “Archangel,” preaching hatred of Jews, hoarding firearms and ammunition in the belief that end times were near, Chicago Tribune reporter James Coates wrote in a lengthy piece on the cult published in 1986.

During the 1985 police raid at the cult’s compound, police discovered 150,000 rounds of ammunition, 30 semi-automatic rifles, 15 machine guns, more than a dozen pistols and $250,000 worth of stolen farm machinery.

They also recovered “dozens of audio tapes and videocassettes as well as books, diaries and other material containing the political speeches of Posse leaders and sermons of Identity preachers,” Coates said in his 1986 piece on the group.

Thimm was murdered at Ryan's orders after being physically tortured, including having his legs broken, skin stripped from his thighs and his fingers shot off.

In March 1985, Ryan had his followers paint “666” – the sign of the Beast – on the back of the small boy, who was repeatedly drenched with ice water and then thrown out in the cold. Later that month, according to court testimony, Ryan told his wives to stand on the farmhouse porch and watch as he dangled the child from a dog leash looped about his neck until he died.

“This is the mongrel, the seed of Satan,” Ryan told his followers, according to court testimony. Ryan later pleaded guilty to second-degree murder for the boy’s death.

The owner of the pig farm, Rick Stice, the father of the murdered boy, became a Ryan follower after apparently buying into the Posse Comitatus message that Jews and international bankers were responsible for farm foreclosures.

“Commune members were required to listen to dozens of audio and video tapes of Wickstrom’s sermons and also watched repeated screenings of the Hollywood movie 'Red Dawn' in which Soviet troops invade a small heartland farm town only to have local teenagers fight a guerrilla war from the countryside,” Coates wrote. “Obtaining permission from Yahweh via arm tests to smoke marijuana, Ryan would urge his followers to take the drug and then run about the farm firing their automatic weapons at various targets representing Soviet soldiers.”