A judge’s order requiring the Bureau of Land Management to refrain from enforcing its regulations while the dispute over the Sugar Pine Mine in southwestern Oregon is being adjudicated appears to be enough for the assembled antigovernment “Patriots” who have shown up on the scene to declare victory and head for home.

“Mission Accomplished” now declares the header over the website of the Oath Keepers of Josephine County, the local organization that had made a national callout the month before for other Oath Keepers and likeminded antigovernment zealots to show up to defend the mine from the supposed plans of the BLM to destroy the mine and kick out its owners. The day before, the headline had read: “STAND DOWN.”

“Our initial mission has been a success... however this is just the first of many missions we are still working on,” the website proclaims.

The declarations of victory came with a stay issued on Wednesday by James Roberts, an administrative law judge with the Interior Land Board of Appeals, which began handling the case of the Sugar Pine mine last month when the mine’s owners filed their appeal of the letter of non-compliance that the BLM had issued regarding their operations earlier this year.

Rick Barclay, one of the mine’s owners and their chief spokesman, called off the effort to protect his mine. “If this is indeed everything the attorney asked for, this will de-escalate the situation for the time being," Barclay told the Medford Mail Tribune. "It may mean my guests will be going back to their daily lives."

Even as the miners filed their appeal last month, the BLM had been clear that it never intended to enforce the regulations until the issue had been entirely adjudicated, which is its standard operating procedure. So when Barclay and his attorneys filed their appeal last month – including the request for a stay of enforcement – the BLM did not oppose it.

In spite of all that, Barclay has insisted that he has been at risk of having the BLM burn down his cabin at the mine, which is why he asked for armed militiamen to help protect it. 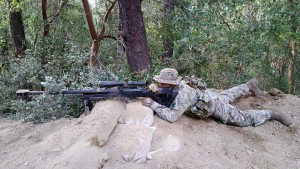 On their Facebook pages, the “Patriots” took to gloating, with Barclay, Idaho III Percent leader Brandon Curtiss, and Eric “EJ” Parker – one of the III Percent movement followers who came to Oregon, and who was notorious as one of the supposed sniper-rifle owners who drew down on federal agents at the Bundy Ranch standoff in Nevada – posting a photo of the three men flipping off their critics.

“From us to you BLM... oh lets not forget the Southern Poverty Law Center and Routers,” the message read. “Looks like the Judge agreed with us!! Granted stay of appeal states you have no jurisdiction or right to terrorize that man!! you'll be getting our bill for the cost of WE THE PEOPLE mounting an EFFECTIVE resistance to your threats. Thats two for two facists!! See you next time.”

The result of the national callout was an encampment next to Interstate 5 the organizers took to calling “Camp Defiance.” Its camo-clad participants and their multitudes of guns, as well as their intimidating attitudes and behavior, had created growing concern among some of the longtime residents and business owners in the area. Some of them held a press conference to express their concerns, at which some of the “Patriots” showed up and began heckling them.

Those concerns only escalated, though, when a helicopter flying in the vicinity of the Sugar Pine mine set off a full-scale alarm among the “Patriots,” who feared the BLM was about to descend upon them with troops and SWAT teams and wipe them out with black helicopters. That turned out to just be another landowner flying a helicopter nearby.

Stewart Rhodes, the national leader and founder of the Oath Keepers, took note of the “victory” in Oregon as a way to explain why the organization’s main website had been hacked that day by vandals who posted obscene material under the group’s name.

“Clearly, what we are doing is ticking off our enemies,” Rhodes wrote. “When you get attacked like this – when you get flack – that is how you know you are over the target.   We won’t let it slow us down.   At the moment, I am at the Sugarpine Mine in Josephine County OR, where the miners have just attained a victory by securing a judge imposed stay, that forbids the BLM from entering the property for purposes of destruction of private property.   A victory. No wonder we are being hacked. Clearly the domestic enemies of the Republic are not happy.”

According to the Mail-Tribune, the Oath Keepers intend to keep up a prominent presence at this weekend’s Boatnik Parade in Grants Pass, where it will be marching and passing out pocket editions of the U.S. Constitution. Rhodes is reportedly planning to be in attendance.