Authorities confirmed earlier today that a manifesto appearing on the website “The Last Rhodesian” was indeed penned by Dylann Storm Roof, the man arrested following the murder of nine African Americans at a historic black church in Charleston, South Carolina on Wednesday evening. 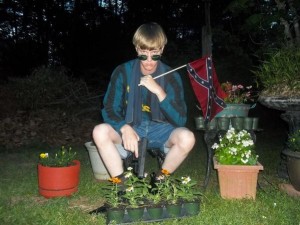 What follows is a textual analysis of the Dylann Roof manifesto and an attempt to trace the ideas expressed therein to beliefs widely-held or debated within the white nationalist movement.

“But more importantly this prompted me to type in the words “black on White crime” into Google, and I have never been the same since that day. The first website I came to was the Council of Conservative Citizens. There were pages upon pages of these brutal black on White murders. I was in disbelief. At this moment I realized that something was very wrong. How could the news be blowing up the Trayvon Martin case while hundreds of these black on White murders got ignored?”

The issue of black on white crime is one of the most common white nationalist tropes. A quick look on any of the leading white nationalist websites and message boards indicates how popular this claim is on the radical right. Today, the Council of Conservative Citizens (CCC), the group Roof credited with introducing him to the white nationalist scene dedicates itself to educating whites on what it sees as an epidemic of black on white crime in the United States. The CCC website has been a touchstone for the radical right to get “educated” on this issue, with articles appearing on a daily basis reporting on “hate crimes” committed by African Americans on whites in the U.S. It appears this was the first stop for Roof on his dive down the white nationalist rabbit hole.

“From this point I researched deeper and found out what was happening in Europe. I saw that the same things were happening in England and France, and in all the other Western European countries. Again I found myself in disbelief. As an American we are taught to accept living in the melting pot, and black and other minorities have just as much right to be here as we do, since we are all immigrants. But Europe is the homeland of White people, and in many ways the situation is even worse there.”

Roof’s comments about the shared struggle between whites in Europe and America comes at a time when extremist activists in the U.S. and Europe have attempted to form a unified voice against what they see as an effort to dispossess whites of cultural power throughout the West. At a 2013 white nationalist gathering in England, Jared Taylor, one of America’s premier white nationalist ideologues, discussed the importance of a unified white nationalist trans-Atlantic front. Taylor stated, “Establishing ties across the Atlantic reinforces a sense of common cause and commitment. The fight in Europe is exactly the same as ours, and it is always inspiring to visit a country, such as France, that has made more headway than we have.”

“Here I would also like to touch on the idea of a Norhtwest (sic) Front. I think this idea is beyond stupid. Why should I for example, give up the beauty and history of my state to go to the Norhthwest (sic)? To me the whole idea just parralells (sic) the concept of White people running to the suburbs. The whole idea is pathetic and just another way to run from the problem without facing it.”

The debate over the creation of a whites-only ethno-state in the Pacific Northwest is one that has waged for many years in white nationalist circles. Some white nationalists see the Pacific Northwest as a logical place for a white homeland on the North American subcontinent due to the demographic makeup of the region. Others, mainly those who identity with southern nationalism, as Roof appears to, believe southern secession is a better direction for whites to take. Some white nationalists reject the notion of creating a white homeland and argue that efforts should be focused on overturning the system from within – by electing like-minded politicians – particularly at the local level, such as school boards. Roof’s very strong opinions on this topic are another indication that he is well versed in the different sides of this debate.

Calling for White Nationalists to Attract More Whites to the Cause

“I believe that even if we made up only 30 percent of the population we could take it back completely. But by no means should we wait any longer to take drastic action.”

Many white nationalists are realistic about the number of whites with mainstream political views they can attract to the cause. Roof is no different. He, like many, believe that nationalists do not need a majority of whites to be on their side, but if they can coax a portion to take up this position, more will follow. Discussion at white nationalist gatherings is often rife with ideas of how to bring more people into the movement. Many lament the number of nationalists who are only active online and choose not to express their views in the real world. Roof expressed this concern towards the end of his manifesto when he wrote, “We have no skinheads, no real KKK, no one doing anything but talking on the internet. Well someone has to have the bravery to take it to the real world, and I guess that has to be me.” For Roof action meant murdering nine innocent African Americans, a step only a very tiny portion of white nationalists believe will help their cause.

“The Jewish Question” – Roof Believes Most Jews Are White

“Unlike many White naitonalists [sic], I am of the opinion that the majority of American and European jews [sic] are White. In my opinion the issues with jews is not their blood, but their identity. I think that if we could somehow destroy the jewish [sic] identity, then they wouldn’t [sic] cause much of a problem. The problem is that Jews look White, and in many cases are White, yet they see themselves as minorities. Just like n------, most jews [sic] are always thinking about the fact that they are jewish [sic].”