Editors' Note: An earlier version of this story called the Appleseed Project a "a militia-based training program." The story has been updated to note the correction.

A man with ties to militia organizations and nationwide assault rifle training program faces a murder charge in Washington state in a case that began with the attempted eviction of house squatters.

James J. “Strat” Faire, 55, and Angelina M. Nobilis, 51, were arrested late last week in Okanogan County after two people were struck and run over by a pickup truck while assisting a property owner evict squatters from his property, authorities said. 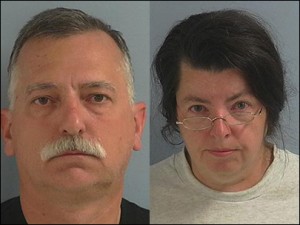 Debra Long, of Issaquah, Wash., was killed and George Abrantes, of Marysville, Wash., was seriously injured in the incident, the Okanogan County sheriff’s office reported. The ages of the victims weren’t released.

Authorities say Faire and Nobilis are accused of moving into a home near Tonasket, Wash., owned by Richard Finegold and refusing to leave, resulting in an argument. At some point last Thursday, authorities say Faire is alleged to have pulled a firearm and jumped into a truck, striking the two victims.

Although it’s not known at this point if the pair are sovereign citizens, the practice of house squatting is a technique widely used by these antigovernment activists, who generally believe most laws and licensing requirements don’t apply to them.

A web site espousing the conservative views of the “ReaganWing” is racing to the defense of Faire and Nobilis.

The pro-gun, pro-Republican site claims Faire “is a nationally known, high-impact, open-carrying, Christian Liberty activist who has been in the crosshairs of the corrupt police-state factions of the Federal Government for years” because of his “stands for Liberty and ... wide-ranging 2nd Amendment personal defense training he has spearheaded.”

Okanogan County Sheriff Frank Rogers did not immediately return a call seeking comment on the case.

Faire, Hatewatch has learned, served as an administrator for a militia web site and once operated what was described as a militia training site in Snohomish County, near the community of Monroe, in western Washington.

In 2010, Faire was identified as a trainer for the “Appleseed Project,” a firearms training program that urged every citizen to own an AR-15 assault rifle with the goal of “teaching every American how to fire a bullet through a man-size target out to 500 yards."

“The government has quite literally become tyrannical,” Faire told a writer for The New York Times who wrote a lengthy piece on the Appleseed Project.

Faire said the federal government “is fulfilling the principles outlined in ‘The Communist Manifesto. It’s completely out of control from city to state to federal to international law.”

“The only thing to do now is to organize citizens into a militia to abolish this government,” Faire told the Times.

It’s not clear when he moved from western Washington to a rural area near Tonasket, a community of about 1,000 people about 15 miles from the Canadian border.

The arrest of Faire is the second time in less than a month that a suspect with ties to militia groups or activities has been arrested and charged with murder in Eastern Washington.

Roy H. Murry, who had lived in Spokane and Lewiston, Idaho, was arrested in late May and charged with torturing and fatally shooting three people, including a Spokane Fire Department lieutenant, before setting fire to a home north of Spokane. Murry honed his shooting skills while practicing with members of the 63rd Light Foot Militia on Stevens County property in northeastern Washington owned by one-time Republican candidate for sheriff, Kenneth L. Barker, of Deer Lake, Wash.