In 2007, Maryland activist Ann Corcoran founded the blog Refugee Resettlement Watch (RWW) in response to what she saw as a “grievous error” by the government in taking in Muslim refugees. In the years since, racist groups have increasingly adopted her as one of their own, no surprise given her growing radicalization. 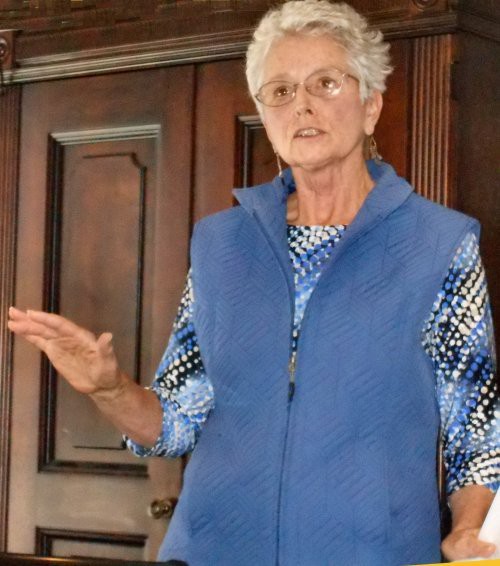 And Corcoran is returning the favor. In recent years, she has touted numerous articles on the website of American Renaissance, a racist journal devoted to the idea that black people are inferior to whites and, in the words of its editor Jared Taylor, incapable of sustaining “any kind of civilization.” A year ago, for example, she wrote about the online magazine’s “good commentary” on immigration to Australia.

Today, Corcoran is routinely lauded by the racist blog VDARE, founded by Peter Brimelow and named after Virginia Dare, said to be the first white born in the American colonies. Even more remarkable, a live feed of Corcoran’s articles has been displayed in the last month on the home page of the Council of Conservative Citizens — an openly racist group that has described black people as “a retrograde species of humanity” and was the acknowledged inspiration for Dylann Roof, who murdered nine black churchgoers in Charleston, S.C., last month.

While it’s not clear if Corcoran knows about the live feed, she certainly knows about the group — she linked to it in a 2013 post on black-on-white crime in Scandinavia. It was precisely those kinds of statistics that Roof cited as his reason for mass murder.

In recent years, the conflict in Syria and last summer’s surge in the number of children fleeing violence in Central America and coming to the U.S. has pushed the issue of refugees into the spotlight. And Corcoran’s blog, which focuses on that issue, has increasingly attracted both anti-Muslim groups and anti-immigrant groups who see her work as a crucial part of their agenda.

Over the past year, for instance, Corcoran has worked very closely with one of the leading anti-Muslim figures in the U.S., Frank Gaffney. Gaffney, who runs the anti-Muslim group Center for Security Policy (CSP), is gripped by paranoid fantasies about Muslims destroying the West from within, like the baseless idea that “creeping Shariah” or Islamic religious law is a dire threat to American democracy.

In March, Corcoran spoke at Gaffney’s National Security Action Summit in Columbia, S.C., and a month later CSP published her “Refugee Resettlement and the Hijra to America.” The 78-page screed calls for Americans to oppose the opening of mosques in their neighborhoods and also calls for a ban on all Muslim immigration to the U.S.

Corcoran has also solidified her ties with the largest anti-Muslim grassroots group in the country, ACT! for America. ACT! boasts hundreds of chapters around the U.S. and its leader, Brigitte Gabriel, is closely tied to a number of politicians. Gabriel, who views Islam as a grave threat to the United States, Israel and the West, is prone to sweeping generalizations and exaggerations as she describes a grand, sophisticated Muslim conspiracy bent on world domination.

Corcoran is scheduled to speak at this year’s ACT! conference, which attracts a number of elected officials, in Washington, D.C. ACT! recently launched a Refugee Resettlement Working Group that aims to make sure that “potential terrorists are kept on the outside looking in.” It is unclear how significant of a role Corcoran will play in this group, but it is clear that Gabriel thinks very highly of her.

Corcoran also has made inroads with a number of other groups in this sphere. In May of this year, Corcoran was a guest on the “Ruthie Report,” an anti-immigrant radio show run by Ruthie Hendrycks, head of one of the most active nativist groups in Minnesota, Minnesotans Seeking Immigration Reform (MINNSIR). In 2012, she was published in the racist journal The Social Contract (TSC), which was founded by white nationalist John Tanton, the founder of the modern-day anti-immigrant movement. Two years prior to Corcoran’s article, TSC published an issue titled “The Menace of Islam,” which called for a ban on Muslim immigration to the U.S. — the same call made by Corcoran in her recent monograph for CSP.

Corcoran is candid about her views on multiculturalism and immigration. As she writes on her blog: “There needs to be a national debate about how many refugees and other immigrants we take and from what cultures they come from. Frankly, we have made a grievous error in taking the Muslim refugees, Somalis in particular, who have no intention of becoming Americans. They are here to change America. Unfortunately, political correctness and a worshipful attitude toward multiculturalism have blinded us.”