One day after John Russell Houser killed two people and wounded nine in a movie theater in Lafayette, La., a picture is emerging online of a man caught up with a number of far-right ideas and fascinated about “the power of the lone wolf.”

Editors’ note: This story was last updated at 4:38 p.m. CST and will continue to be updated throughout the day. 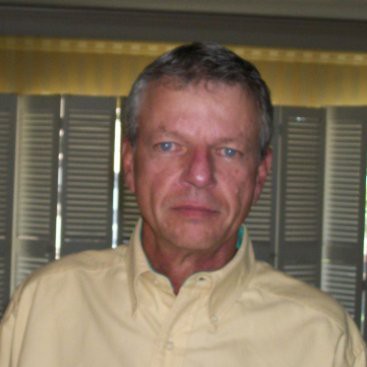 Photo of suspect John Russell Houser via his LinkedIn page

“Do not mistake yourselves for one minute, the enemy sees all posted on this website. I do not want to discourage the last hope for the best, but you must realize the power of the lone wolf, is the power that come forth in ALL situations,” Houser wrote on aforum dedicated to the New York chapter of Golden Dawn, Greece’s far-right neo-Nazi political party. “Look within yourselves.”

That comment was one of dozens of messages that Houser, 59, left on several Internet message boards, all of which provide a picture of a politically disaffected, angry man who viewed the United States as a “financially failing filth farm,” expressed interest in white power groups, anti-Semitic ideas, the anti-gay Westboro Baptist Church, as well as a number of conspiracy theories often espoused by the antigovernment right.

But his extremism appears to have gone deeper. In 2005, he registered to attend David Duke’s European-American Unity and Rights Organization(EURO) Conference in New Orleans, according to a spreadsheet of conference registrations obtained by Hatewatch. He lauded Duke, one of the most recognizable figures of the American radical right, a neo-Nazi, longtime Ku Klux Klan leader and now an international spokesman for Holocaust denial. On a PoliticalForum.com, Houser wrote in 2013, “David Duke has been unseen or hear of in years, but at one time appeared exactly what US needed.” 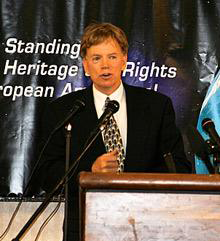 David Duke (pictured) organized European-American Unity and Rights Organization (EURO) which claims to fight for “White Civil Rights” for “European and Americans Wherever They May Live.

Elsewhere online, Houser described his interests as “hustling” and said that his political involvement was minimal, though he belonged to a forum associated with Tea Party Nation. He sang the praise of Adolf Hitler many times, saying “Hitler is loved for the results of his pragmatism,” last January on the website stateofmind13.com.

Aside from his affinity for Hitler and Golden Dawn, he expressed racist extremism elsewhere. He promoted the disproven racist theory that a connection exists between race and IQ, and promoted The Bell Curve, a book written by Charles Murray. As for voting, he said, “don’t vote, waste of time.”

The shooting comes five weeks after Dylann Roof walked into a historic black church in Charleston, S.C., and killed nine people, adding to an ever growing list of attackers who, motivated by right-wing ideologies, have a left a growing body count of innocent victims.

Earlier this year, the Southern Poverty Law Center released a report that found lone wolf terrorists were among the most violent threat emerging form the radical right. The study found that in the last five years, an attack from a lone wolf was carried out or thwarted on average every 34 days and that the overwhelming majority of those attacks, 74 percent, were carried out by a single person — 90 percent were carried out by a group of no more than two people.

Last year, the SPLC released a report,White Homicide Worldwide, about Stormfront, which is the largest hate site on the Web. The report pointed out that more than 100 people were killed by extremists active on the site in the prior five years. The report also noted that personal crises often precede extremist violence. According to CNN, Houser suffered just such a personal crisis, having been evicted from his home in March 2014. Those personal troubles also came as he praised Oklahoma City bomber Timothy McVeigh.

“It is a shame Tim McVeigh is not going to be with us to enjoy the hilarity of turning the tables with an IRON HAND,” Houser wrote on the Golden Dawn website.

Here is a sampling of Houser’s comments left across the Web: 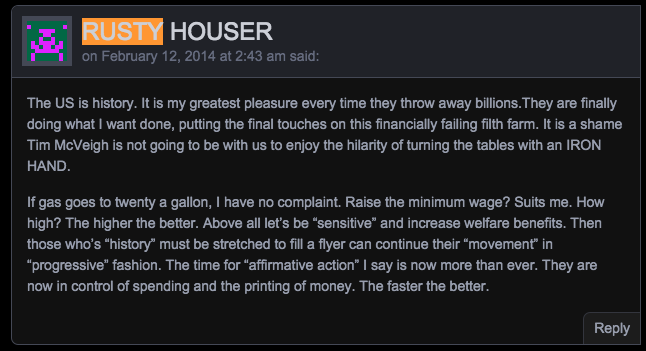