Hysteria over a Muslim community’s plans to place a cemetery in a small rural Texas town has reached such heights that residents are proclaiming that burials would likely contaminate the town’s drinking water — leading one resident to recommend that the site be contaminated with the blood and heads of pigs.

The residents of Farmersville, Texas — located about 40 miles northeast of Dallas — recently descended upon the town council to demand that city fathers put a stop to a request from the Islamic Association of Collin County to turn a 35-acre open tract into a Muslim cemetery. The request was filed because the region’s Muslims face a shortage of cemetery space for members of their faith. 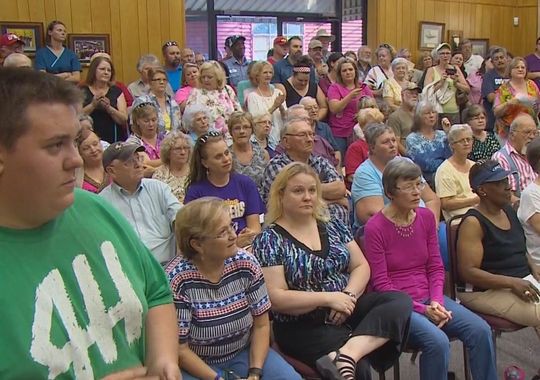 The meeting was replete with fears that the plan is mere cover for more nefarious purposes.

“It is my duty and my right to warn when there is a danger,” said one resident. “They’re at war with us,” said another. “It’s gonna kill Farmersville,” warned yet another.

A local pastor, David J. Meeks, told the Dallas Morning News that residents fear an expanded Muslim presence in their town. “How can we stop a mosque or madrassa from going in there?” he asked. “The concern for us is the radical element of Islam.”

But the wildest charges came from people claiming that they were concerned the cemetery would contaminate the city’s water supply.

“When somebody dies, they bury them at that time,” Farmersville resident Troy Gosnell told KTVT-TV. “You don’t know whether they were shot, diseased or anything else. All they do is wrap them in a sheet, throw them in the grave and bury them.”

Another resident claimed that this was part of a plot to poison the town’s water supply. “Their bodies are generally above the water,” she explained. “We get rain, it’s going to be in our drinking system.”

An elderly resident proposed a plan of attack for locals to dissuade the Muslims from seeking the land: “Take and dump pigs’ blood and [plant] pigs’ heads on a post,” he said, “and they won’t buy the land.”

In reality, Muslim Americans use coffins and vaults to bury their dead. Khalil Abdur-Rashid, a spokesman for the Islamic association, said misinformation was behind the criticism. He contended that the plans for the cemetery have more to do with “human dignity” than religion.

“They are fearful of what they don’t understand and hopefully it’s an opportunity for us to come together and learn a little bit more about each other and hopefully dispel some of those misconceptions,” said Alia Salem with the Dallas-Forth Worth chapter of CAIR (Council on American-Islamic Relations) Texas.

Of course, such irrational behavior related to Islamophobic hysteria isn’t confined to rural Texas. Recently a Florida gun shop owner announced via YouTube video that he was declaring his store a “Muslim-free zone” as a way of preventing terrorism.

CAIR officials in Florida noted that such a declaration violated state law, and the organization would be requesting an investigation.

“I invite Andy, the gun shop owner, to come and break bread with us, to get to know us as his fellow Americans. As his neighbors. We might be his doctor, his police officer, his firefighter. That’s what the American-Muslim community is. And I think he should get to know us, and not let fear and hatred divide us as Americans,” said Hassan Shibly of CAIR Florida.