In the past few weeks, the American Freedom Party (AFP) has switched its presidential candidate, increased campaigning in the Pacific Northwest –- traditionally a focal point of most white nationalist political efforts –– and moved to build ties with other like-minded organizations. Though none of these efforts stand to impact the political landscape nationally, AFP’s is clearly trying to dig the party out of the bin of the political insignificance.

And for a party founded by skinheads, the path they envision to political relevance begins not so much with a man alone, but a man with a message.

While he claims on his blog to have been the message man in the Reagan administration responsible for crushing communism and bringing down the Berlin Wall, Bob Whitaker has a more timely reason for fame in white nationalist circles.

Whitaker is the author of “The Mantra,” a 221-word attack on multiculturalism that has grown wildly popular on the racist right. Sections have appeared on banners hanging from Interstate overpasses, on billboards and on signs at white nationalist gatherings/protests. It’s most popular phrase, “Anti-racist is a code word for anti-white,” has been reduced to dozens of similar phrases, including “Diversity = White Genocide” and “Diversity is a Code Word for Anti-White.” Surprisingly, the message has become a unifying touchstone associated with cries of “white genocide” that have united the American white nationalist right. 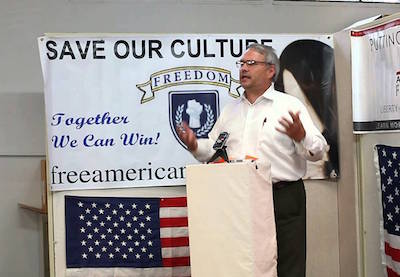 Undoubtedly, fame surrounding the Mantra drove AFP’s initial decision to pick Whitaker as a vice presidential candidate. His candidacy generated widespread excitement in white supremacist circles, with many pledging their full support to Whitaker and his followers, collectively known as the “SWARM.” Then, last month, the group named Whitaker its presidential nominee. When asked about the switch, AFP chair William Johnson told Hatewatch, “Mr. Whitaker is a much stronger candidate, much better well known in and outside of the movement.”

That fame was undoubtedly associated with the proliferation of the Mantra. But there was something else that had thrown the concept of white genocide into the mainstream.

On June 17, Dylann Roof allegedly killed nine black congregants in Charleston, S.C. In the aftermath, pictures of Roof wearing a jacket affixed with the patches of the flags of the former governments of Rhodesia (now Zimbabwe) and the apartheid state of South Africa, were discovered. White nationalists have often pointed to these countries as examples of “white genocide.”

The Mantra had gone mainstream, and AFP was ready to jump.

Over the past several months, AFP has focused its political efforts specifically on Oregon and Idaho in an effort to garner election success.

In July, AFP’s Board of Directors announced a campaign to push a statewide initiative in Oregon approving “Proportional Representation,” also known as “ranked choice voting,” onto the ballot in November. The idea, as opposed to majority elections, argues that any group of like-minded voters should win political seats in proportion to its share of the popular vote.

To achieve that end, AFP’s Oregon chapter is busy gathering signatures in St. Helens, a town of 13,000 that is 90% white, to push the initiative and, with any luck, earn a seat on the city council. To do so they need signatures from 10 percent of voters, and AFP leaders claim they are nearing this threshold.

The political benefits, if such were to pass, are clear.

“Residents would therefore to be able to vote for any number of the eight city council seats up for election every other year by ranking their choice of candidates. Our initiative would also permit voters to simultaneously increase the city council from four to eight members, a particularly well received proposal in this rapidly growing area,” AFP said in a post on the on racist website Occidental Observer.

In other words, changing the way the election works might give a fringe political party like AFP and its racists supporters a better chance of getting a candidate on the school board, where they could challenge Common Core standards and multiculturalism.

In Idaho, AFP is taking a different approach. In late July, the Idaho Statesman published and editorial from Boise Mayor David Bieter calling for Idahoans to embrace diversity and continue to welcome refugees to make Boise “the most livable city in the country.” AFP responded by issuing robocalls statewide criticizing Bieter’s comments and attempting to stir up fears around Muslim refugees. “Wake up Idaho, diversity equals white genocide. Europe, America and all white countries are fast becoming overwhelmingly non-white because you are afraid to take a stand,” the voice on the calls said.

AFP chair Johnson said the robocalls was a direct response to the Boise mayor’s comments about diversity and because “Syrian refugees are going into Boise.” 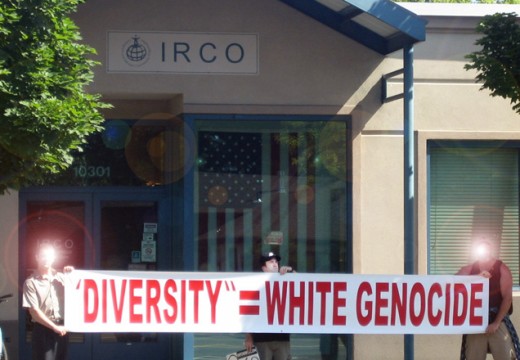 Attempting to stoke fears about refugees is an ever-present topic of discussion in white nationalist circles, and targeting refugees is also nothing new for AFP. In 2014, AFP’s activists in Oregon organized a protest outside the Immigrant and Refugee Community Organization in Portland. At the protest, AFP activists held up a large banner that read “Diversity = White Genocide.”

New Alliances: AFP’s Attempts to Partner with the Council of Conservative Citizens

All of this comes as the AFP strikes out to forge new alliances across the right.

Next weekend, Johnson plans to travel to Nashville, Tenn., to speak at the Council of Conservative Citizens (CCC) national conference. His topic: “Benefits and mechanics of a CofCC partnership with the American Freedom Party.”

Started in 1985, the CCC is the modern reincarnation of the old White Citizens Councils, which were formed in the 1950s and 1960s to battle school desegregation in the South. The group has refereed to African Americans as a “retrograde species of humanity,” and in recent years, the CCC has shifted its focus to spreading fear on black-on-white crime –– an inspiration for the mass killing in Charleston.

After the shootings in Charleston, the CCC was thrown into the national spotlight after Roof’s manifesto revealed the group was his gateway into the white nationalist world – a revelation that sent the CCC reeling under a media barrage that has driven its webmaster Kyle Rogers underground and further damaged the group’s reputation.

So why is the AFP seeking to forge ties with the CCC now?  Is this move just an attempt to capitalize on the wave of publicity the CCC has received, much in line with the party’s decision to pick Whitaker as a candidate? Is AFP concerned at all that aligning itself with a group so closely tied to a mass murder will hurt their reputation?

While Johnson admits a partnership is “unlikely to happen,” he told Hatewatch he plans to “push for it.” The CCC “is a little bit concerned about their reputation is being besmirched because of the news,” Johnson said. But he is “happy” to enter into a working relationship with the group.

Johnson went on to say he is “not worried” that a potential partnership with CCC would tarnish AFP’s reputation.

Following AFP’s abysmal displays in recent elections, it is no surprise it is proactively canvassing for votes so far ahead of Election Day. The decision to choose a candidate and a slogan well known in white nationalist circles may increase its numbers. But if AFP can’t bring its concerns to the electorate, Johnson assured Hatewatch there are others who will.

“You got people like Donald Trump, who is you know, who is spouting a lot of the things we do,” he said.