The police chief of Lake Arthur, La., is demanding the resignation of a detective who was a member of the Ku Klux Klan in 2014 when he attended an anti-immigration rally in North Carolina.

If Det. Raymond Mott -- now on leave without pay -- doesn’t resign by Wednesday, Lake Arthur Police Chief Police Chief Ray Marcantel says he will ask the town council to fire the officer for being a Klan member and attending the rally.

The detective has made more recent arrests than any other officer with the tiny Lake Arthur Police Department, and now those cases are under review for possible bias, given Mott’s involvement with the KKK, officials say.

Details of the chief’s plan to fire the detective for his involvement with the Loyal White Knights of the KKK were publicly divulged in three news stories published this past week in the Jennings, La., Daily News.

The newspaper stories came just days after a photograph of the detective -- wearing a Klan paramilitary unit with the tradition KKK patch -- was widely circulated on social media. 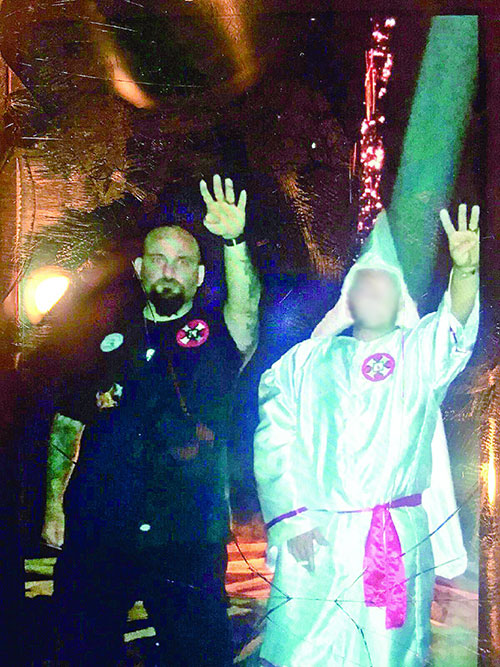 The brewing Lake Arthur case is the latest incident in which police officers have been publicly identified as active members of hate groups.  Earlier this summer, two lieutenants with the Anniston, Ala., police department were identified by SPLC as members of the neo-Confederate hate group League of the South (LOS).  One of those Anniston officers was fired and the other retired.

Now in Louisiana, Mott says he won’t resign and promises to sue.  He claims the photograph of him in a KKK uniform, doing a Nazi salute, was forwarded to the Lake Arthur Police Department four months ago, and that the matter was kept quiet until Daily News reporters began asking questions last week.

Mott claimed the picture of him in the KKK uniform was leaked because he refused to continue participating in the hate group’s activities, the newspaper reported.

“I refuse to resign,” the detective told the newspaper. “I have been baptized – after the events and have the documents to prove that – and a short while after my baptism, I have become an ordained minister and started a charity-based ministry in Lake Arthur.”

Mott initially claimed he attended the Klan rally in Troy, N.C., while on a “secret mission” for the FBI, but he later said that wasn’t true.

In its Sunday editions, the Daily News reported Mott attended the Klan rally “on his own free will.”  He described that decision “as ignorant but maintained he did nothing wrong,” the newspaper reported.

“Several investigations have been completed to prove that,” the detective said, confirming his identity in the photograph.  “I am in the right here.

“I have never even had a negative write-up in my file since my start in law enforcement as a reserve in 2006,” Mott told the Jennings newspaper.  “I am not going to quit my job because I made a decision to support a cause I thought was right at the time - illegal immigration not racism,” he added.

The police chief did not return a call from Hatewatch for comment.

“This is just an unpleasant situation,” the chief told the Jennings newspaper.  Marcantel said he asked Mott “to resign because I thought it would be easier on everyone involved, including him. I felt this was the best thing for the department and the people of Lake Arthur.

“These are my people and I want to serve them well,” the chief added.  “I like the man. He’s a good officer and I hate that this happened, but I still have to do the right thing and I will.”

Marcantel said he did a “thorough background” check prior to hiring Mott, checking with three other police agencies where Mott apparently worked.  Those agencies weren’t publicly identified by the chief who said Mott’s “credentials showed no questionable history.”

“Everything was clear with his background check,” the chief told the newspaper. “I did everything I was supposed to do then, and now I’m just trying to do my job and keep the peace.

Meanwhile, Michael Cassidy, the district attorney for the 31st Judicial District Court, said arrests made by Mott leading the prosecutions will be reviewed.

“Certainly I am concerned because I recognize that all law enforcement officers should be objective and unbiased in order to do their jobs fairly and consistently,” Cassidy told the newspaper.