The announcement yesterday that anti-Semite and white supremacist Frazier Glenn Miller was found guilty of shooting three people to death in April 2014 at Jewish facilities in Overland Park, Kan., was met with mixed reaction by the hate movement.

On the neo-Nazi Vanguard News Network (VNN) forum, where Miller was a frequent poster, support was widespread. “Crowe” wrote: “It looks like Miller is sticking to his guns and not giving the system what it wants - a sniveling apology for being an evilracistnaziwannakill6millionjooz in an effort to appeal for leniency.” Crowe went on to praise Miller for “not showing any weakness.” 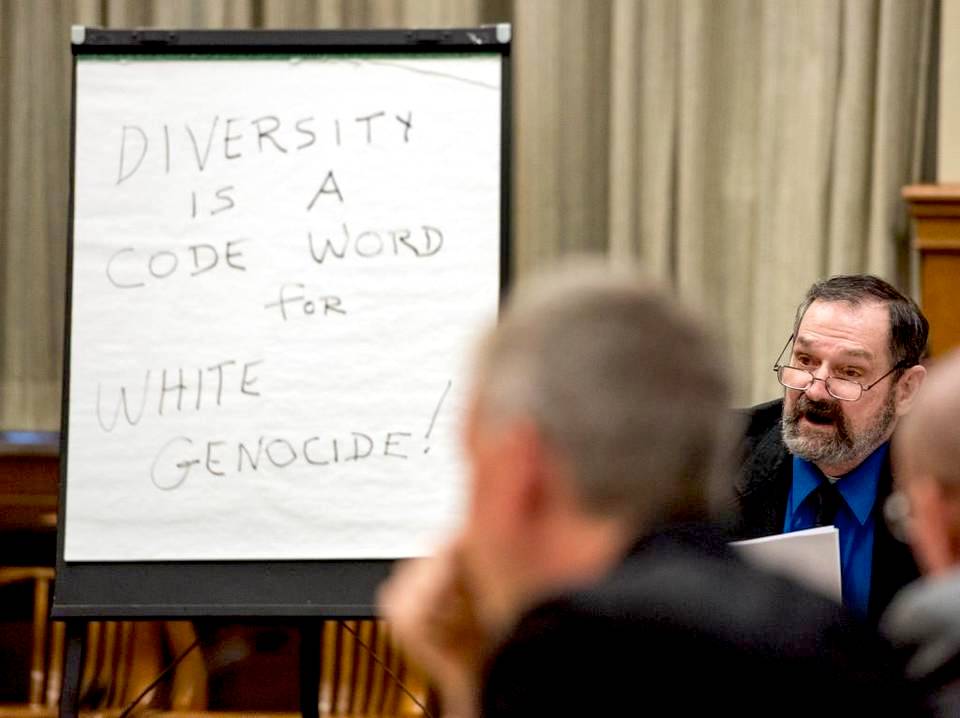 “B. Amy” praised Miller last week for being a “sole human being” standing up to this “genocidal insanity” against whites supposedly perpetrated by Jews.

Miller’s biggest fan is Alex Linder, who runs VNN. Linder has been acting as a virtual research assistant to Miller, collecting items that supposedly were going to help Miller prove that Jews are out to get whites, and thus that Miller’s murder spree was justified.

Linder, who has said he’d be willing to testify for Miller, has posted anti-Semitic tidbits from extremists including Pat Buchanan and Ted Pike that he feels would have helped Miller’s defense prove that Jews are the real enemy of whites. Just yesterday, Linder posted an email to Miller’s lawyers asking them if “you could put this bit of research on a disk or drive” in Miller’s hands.

Linder has staunchly supported Miller’s actions, and as the trial has worn on and Miller’s ability to make his anti-Semitic points has failed, Linder has become more hardline. Last week, Linder, clearly worked up given the state of trial, posted rather ominous plans for his own future plans.

“On the hard side: organizing against the enemy,” was Linder’s first promise for VNN’s future. He went on to comment that “this is not being done on any substantial scale in the U.S.” and that white nationalists “have not organized because they are being prevented from organizing.”

“There is another vanguard move to be made in the online world, and VNN will take it. But more on this in a few weeks,” Linder said.

Other VNN posters have sounded similarly harsh since the verdict. A Canadian using the handle “Michael G.” wrote, “If any of us decide to take the path Glenn has taken do not get taken alive and do not kill yourself.” He went on to say, “The only major mistake this man made was not taking out the systems [sic] soldiers when they came for him. Feel free to disagree, my mind how ever is firm in the actions we must take if we are to ever free ourselves of the f------ jews [sic] and their brainwashed majority.”

Things were quite different over on the racist forum Stormfront, where little support for Miller was to be found. “Commissioner Ferris” wrote, “By every objective standard, Glenn Miller is an abject failure. His mission failed.”

“Gilamut” wrote, “By indiscriminately killing 3 random white people to include a 14 yr old boy, he was contributing to White Genocide, wasn't he?,” pointing to the fact that though Miller thought his victims were Jews, they were not. Gilamut went on to say that Miller’s actions would be portrayed as those of “a complete incompetent moron.”

“Icantguessaname,” labeled Miller “a child killer” as one of his victims was a teenager.

Other hate sites also seemed to be ignoring the verdict—and Miller. No mention was made of the trial on white nationalist sites such as that of the National Policy Institute, Occidental Dissent or American Renaissance. Perhaps it is understandable that white nationalists, who usually consider the kind of guttural anti-Semitism espoused by Miller and Linder as beneath them, were ignoring Miller. But even the anti-Semitic cesspool The Daily Stormer had no reference to the verdict on its site as of this morning.

Most surprising of all is that Miller’s longtime friend Will Williams, who heads the National Alliance (NA), has not come to his defense. Not a word about Miller or the verdict has appeared on the NA websites National Vanguard or White Biocentrism.

In the past, Williams seemed much more interested in Miller’s views and his reasons for killing three people. This past fall, he had apparently tasked Kevin Strom, his media guru, to call Miller in prison and tape his confession. The audio, which was later posted on VNN, is chilling.

“My biggest fear [was] that I would die before I killed Jews,” Miller tells Strom. After the killings, Miller said he had “never felt such exhilaration. It was overpowering.” The defense played portions of the audio at trial.