A sovereign citizen planned to overthrow the West Virginia state government –– and shoot any police officers who intervened. 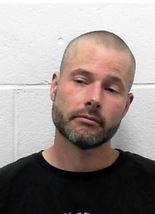 A man described by authorities as an antigovernment “sovereign citizen” is accused of plotting to overthrow the state government in West Virginia, hoping to establish a prototype for extremists to follow in other states.

But instead of carrying out his intended coup, Thomas David Deegan, 39, of Mineral Wells, W.Va., spent the day in a jail cell on Thursday, charged with threatening to commit a terrorist act. Extra security was on hand at the state capital in Charleston, media outlets reported, and government business went on as usual.

Deegan is accused of laying out his overthrow plans in a series of conference calls -- one of them as recently as Sept. 14 -- where he called on like-minded armed extremists to grab their firearms and assist him in an attempt to overthrow state government, according to court documents.

His intended plan was to remove several state government leaders from their offices, charge them with treason and replace them with sovereign citizens. After apparently setting up a sovereign citizen-style court system, those found guilty of treason would be put to death.

So far, Deegan is the only suspect arrested in the plot, and it isn’t clear if other possible conspirators involved in the conference calls will be charged.

According to his charging documents, Deegan’s plan to involve other sovereigns was simple: Get your guns and come to Charleston and help oust and arrest state officials. But as wild-eyed as the plan sounds, it is somewhat reminiscent of what the Montana Freemen and their associates talked about doing in the mid-1990s before their collateral activities set the stage for a lengthy standoff with the FBI.

In West Virginia, Deegan reportedly told his prospective followers that if they met resistance from law enforcement or military forces, they should respond with gunfire.

“We are at war,” Deegan said during one of the conference calls, according to the criminal complaint. “The more that come to Charleston, the less [likelihood] for bloodshed.”

In one conference call, the complaint said, Deegan was asked if police might support such an insurrection, to which he responded, “If you see the police coming and pulling up in a vehicle, I suggest you shoot them.”