Frank Gaffney got caught in bed with a white nationalist, and now he’s acting like it didn't happen.

It’s not a surprising move, considering how much Gaffney has to lose. But the controversy around him inviting on his show Jared Taylor, one of America’s most outspoken and well-known white nationalists, is not going away.

At least not anytime soon.

In a statement on his Center for Security Policy (CSP) website after he took the interview down, the group wrote:

The host was unfamiliar with Mr. Taylor’s views on other matters and did not discuss or endorse them. Subsequently, Mr. Gaffney had a chance to examine those views and the American Renaissance website on which they appear. There is much there with which he strongly disagrees.  Had due diligence been done beforehand, such disagreements would have resulted in Mr. Taylor not being invited on the show, routine compliments to such guests not made and an offer to appear again not extended.”

Jared Taylor didn’t buy it. In an open letter responding to such a bald attempt to to whitewash the incident, Taylor responded:

Removing our interview from your website does not mean it never happened. We will be posting a transcript shortly. What is much more dismaying is what removing the interview says about you. If you wanted to make a record of our disagreements, the manly thing would be to invite me back on your program and explain to me why I am wrong.

Gaffney didn’t respond to Taylor’s open letter, choosing instead to sweep this story under the rug and be finished with the whole ordeal. But one puzzling fact remains: Gaffney still follows Taylor on Twitter. It’s unclear why. 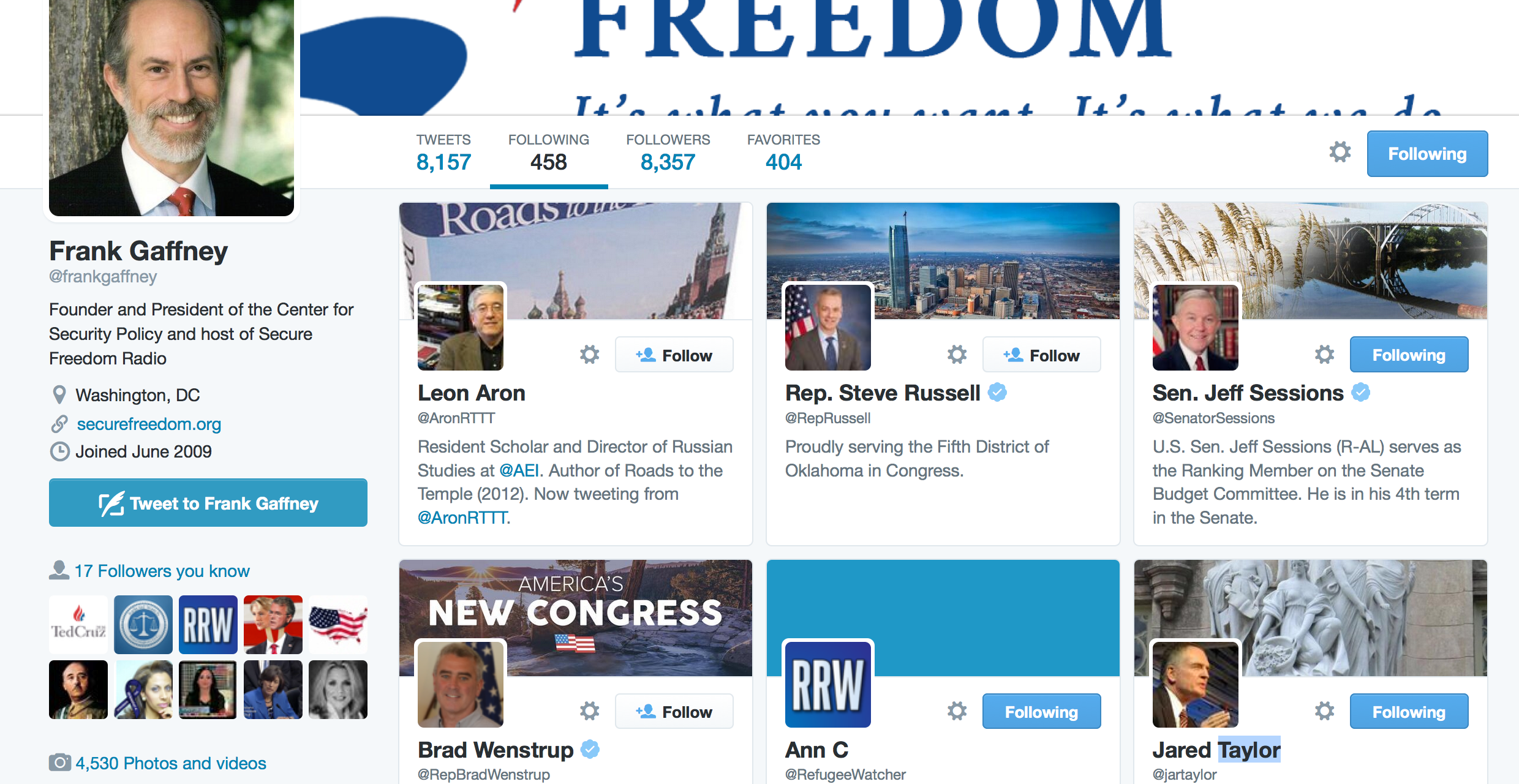 Taylor did not return email messages from Hatewatch asking him to clarify his relationship with Gaffney. But if the interview is any indication, they appear to remain sympathetic to one another.

In the interview, Gaffney wasn’t repulsed by Taylor’s views and complimented American Renaissance. That's not surprising given Gaffney's own comments. Earlier this year, for example, at the Western Conservative Summit in Denver, Gaffney responded to a question about Somalis working in American meat processing plants. “I don’t know about you, but it kind of creeps me out that they are getting jobs in the food supply of the United States,” Gaffney said – a statement one would expect white nationalists like Jared Taylor making.

But open associations with white nationalists can be damning to one’s political clout, and Gaffney, a former U.S. assistant defense secretary, knows this better than anyone.

So far this year, he has hosted National Security Summits in Iowa, New Hampshire and South Carolina. The majority of the GOP Presidential candidates have attended and addressed one or more of these events, demonstrating the sway Gaffney has. Later this month, he will be presenting Alabama Sen. Jeff Sessions with CSP’s 2015 “Keeper of the Flame” award in DC. The cost attending the gala? A cool $5,000.

Following Gaffney’s interview with Taylor, People for the American Way issued a press release calling for elected officials to renounce Gaffney. They seem to have not gotten the message. Just three days after Taylor was interviewed, Rep. Steven Russell (R-OK) was a guest on Gaffney’s show.

It’s high time that Gaffney comes clean about his extremist views and racist associations, and politicians stop giving him the mainstream credibility he truly does not deserve.