Militiamen’s gun-toting threats at mosques mostly turn out to be empty words as rallies crumble in the face of 'anti-hate' groups.

The antigovernment militiamen who concocted this weekend’s “Global Rally for Humanity” – in which they and their fellow Patriots agreed to hold protests at mosques in over 20 cities around the nation, all while bearing weapons – were not shy about their ambitions and hopes that the demonstration would be massive and worldwide.

But fantasy met reality on Saturday, when most of the planned protests simply didn’t happen after all. Among the few rallies that actually came together, the counter-protesters well outnumbered the anti-Muslim activists. Indeed, “anti-hate” protesters came out to make their presence felt even at some of the locations where not a single protestor showed.

"I expected to see a group of people here angry, with signs talking about how awful Muslims were, but no one showed up," said Brian Todd, pastor of a Baptist church in Huntsville, Al., after no one bothered to show up for the announced protest at the local mosque. Todd had come out to show his support for his Muslim neighbors.

That was a common refrain at a number of the locales. At one of the planned protest sites, in Medford, Ore., the organizers yanked their names from the national roster and renamed their rally a “Back the Blue” pro-law-enforcement affair. One of the organizers told a local TV station that they didn’t want to be associated with “a hate group.”

In Bremerton, Wash., where the rain came down in sheets, no protesters were to be found at the planned site. However, a cluster of about 35 local residents, spontaneously spurred on by news coverage of the planned rally, came out to defend their Muslim neighbors.

“We don’t mind getting wet,” one of them told Hatewatch. “It’s worth it to defend our friends.”

Some of the Bremerton participants said they saw a carful of camo-wearing folks who “flipped us off," but they didn’t stop. “I think they saw they were outnumbered badly,” one told Hatewatch.

And in Sydney, Australia – one of the organizers’ hopes for making their protest have a “global” reach – hardly anyone turned up either, except for counter-protesters who outnumbered them four to one.

There were a couple of notable exceptions. In Phoenix, the protest led by uber-“Patriot” Jon Ritzheimer – who appears to be one of the godfathers of the “global” protest and its chief promoter – drew a couple of dozen participants, several of them well armed. However, they were dwarfed in both size and volume by the chanting counter-protesters who met them and called them out as “racist.”

"Muslims are practicing Islam in its literal interpretation and that's why we have deaths going on in our country and terrorist attacks taking place," he explained. 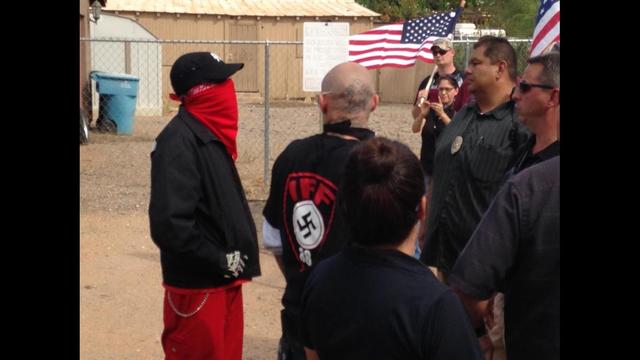 A group of neo-Nazis attempted to join anti-Muslim rally-goers in Phoenix, but were politely turned away.

A small cluster of neo-Nazis wearing shirts with fascist symbols came to the rally as well, but Ritzheimer asked them to leave.

"We politely asked these Nazis to get out of here, because they do not represent us, and I do not condone those actions," he said.

And in Dearborn, Mich., a small group of anti-Muslim protesters showed up outside of the mosque, only to find an even larger group of counter-protesters as well.

As Huffington Post noted, the cumulative effect of the weekend’s protests, in fact, was a large outpouring of love and interfaith support for the Muslim community – and a large heaping of contempt for the fearmongers behind the rally.

“We are proud of our allies from different faiths who have been our partners in dialogue over the years and stand with us against fear and hate,” said Dr. Sayyid Syeed, national director of interfaith and community alliances at the Islamic Society of North America in Plainfield, Ind.