Agents from the Bureau of Alcohol, Tobacco, Firearms and Explosives and the St. Louis Fire Department are investigating six church fires in St. Louis since October 8.

Editors' Note: Authorities have arrested a suspect in the arsons. Read more here.

An arsonist is blamed for setting a weekend fire at the entrance of a predominantly black church in St. Louis – the sixth suspicious blaze of its kind in 10 days in that community.

The six church arson fires – all within a three mile radius -- have occurred in North St. Louis, near Ferguson, the scene of rioting and increased racial tensions following the August 2014 police shooting of Michael Brown.

Agents from the Bureau of Alcohol, Tobacco, Firearms and Explosives and the St. Louis Fire Department are investigating to determine if there’s a connection between the fire church fires.

No suspects have been identified or arrested.

The most recent occurred just before dawn Saturday at New Life Missionary Baptist Church in the in the Walnut Park East neighborhood in northwest St. Louis. 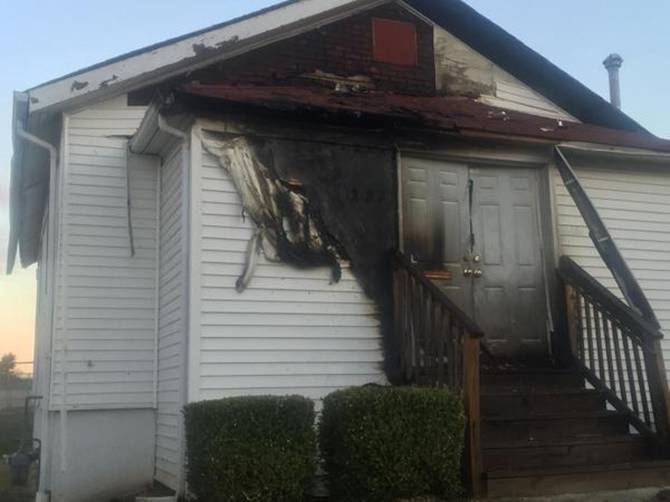 Damage primarily was confined to an exterior wall, the roof and a doorway where the blaze appeared to have been set.  With smoke damage in the interior of the church, the congregation held Sunday’s regular service on folding chairs on the lawn outside the charred house of worship.

“This was done by the mind of someone who is spiritually sick,” the church’s pastor, Rev. David Triggs, told the St. Louis Post-Dispatch.

The latest string of church arson fires began on Oct. 8 when someone set fire to the Bethel Non-Denominational Church, also in northwest St. Louis.  That fire, also set at a doorway, caused minimal damage.

On Oct. 10, the second fire occurred at the New Northside Missionary Baptist Church. On Oct. 14, an arsonist started a fire at St. Augustine Catholic Church. The following day, another arson fire was reported at New Testament Church of Christ.

David A. Love, a prominent journalist and commenter on African American topics, told Hatewatch today that the “arson of five black churches in St. Louis in 10 days is both alarming and not surprising.

“This is alarming because domestic terrorism is alive and well,” Love said.  “It is such a problem that the U.S. Department of Justice recently predicted increases in violent acts by white extremists who are responding to a new reality in which people of color will become a majority in America.’

“At the same time,” Love said, “there is a vicious cycle created by rightwing politicians, the NRA and hate groups who stir up anger, fear and resentment over changing demographics and want their country back.  Arson and other crimes are a natural outgrowth of that.  These groups need a scapegoat, whether African Americans, Latino immigrants, the LGBTQ community or others.”

In a follow-up comment to Hatewatch, Love noted that, "It is interesting, and more than coincidence, that St. Louis has also witnessed a great deal of racial tension and violence, in light of the events in Ferguson. In an environment which fosters government sponsored racism -- police violence against black residents, racial profiling and economic exploitation through a system of court fees amounting to a black debtors' prisons -- it does not take such a stretch of the imagination to consider that some private citizens may feel emboldened to take matters in their own hands.

The fires in St. Louis come four months after a string of six church fires in the days following the June 17 murderous rampage by a white supremacist who fatally shot nine people at Emanuel AME Church in Charleston, S.C.  Of those fires in four southern states, some were accidentally started or caused by lightning, but authorities said three were the work of arsonists.