For the second time, a state has admonished the Oath Keepers' Stewart Rhodes for his conduct as an attorney. 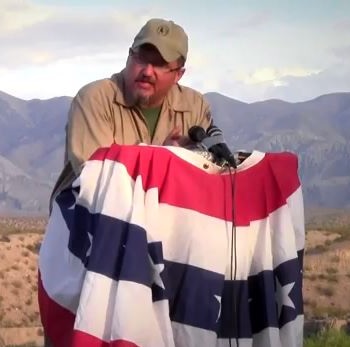 The Oath Keepers’ Stewart Rhodes is in trouble again.

The Montana Supreme Court’s Office of Disciplinary Counsel recommended last week that Rhodes be disbarred for violating his attorney oath — the second time in three years a state has admonished Rhodes for his conduct as an attorney.

The Montana high court recommendation was a response  to several complaints against Rhodes. On April 28, 2015, for example, a federal judge in Arizona filed an ethics grievance after Rhodes attempted to file a lawsuit without a license. In a separate case, Rhodes was accused of abandoning a client in the midst of a federal lawsuit. A third complaint centered on Rhodes' conduct representing a Quartzsite, Ariz., blogger who became a cause célèbre for the antigovernment right.

To avoid responsibility in some of the cases, Rhodes filed a request in late 2013 asking to be released from the obligations. But by April 2014, when the Oath Keepers found themselves front and center in an intensifying clash between Nevada rancher Cliven Bundy and the BLM, Rhodes stopped responding to the court altogether. On April 15, a day after antigovernment extremists confronted the Bureau of Land Management in Bunkerville, Nev., Rhodes failed to appear for a status conference. Three days later, a judge removed him from the case.

According to the Montana high court filing, Rhodes has engaged in a pattern of “knowing and intentional disregard of his obligations as an attorney, to the profession and to the public.” Rhodes did not return an email messages asking for comment.

A former Army paratrooper, Rhodes graduated from Yale Law School in 2004 and subsequently clerked for Arizona Supreme Court Justice Michael D. Ryan. Five years later, he turned his attention to building the Oath Keepers, a group comprised of former military and police personnel who, backed with far-right conspiracy theories, swear to uphold their oaths and disobey orders they deem to be unconstitutional.

Rhodes maintains a law practice in Kalispell, Mont., but his daily obligations increasingly focus on his Oath Keepers, who have involved themselves in a number of tense conflicts nationwide — from patrolling the streets of Ferguson, Mo., to offering personal security to Kim Davis, the Rowan County, Ky., clerk refused to issue marriage licenses to same-sex couples in violation of federal law. It's a pattern that began four years ago when Rhodes involved himself with one of the cases the Montana court is now using against him.

In 2011, the Oath Keepers descended on Quartzsite, Ariz., where hundreds came out in support of a local blogger, Jennifer “Jade” Jones, who had been arrested after disrupting a Town Council meeting. It was an odd place for the Oath Keepers to appear, but Rhodes had high aspirations for what his group would soon become.

“This is the start. We want to set an example here,” Rhodes told a crowd of protesters who had gathered as part of a “Liberty Festival” in Quartzsite that year. “If every community across the country simply did what's being done right here – right here, right now – we would restore our republic.”

The Oath Keepers paraded through town, did little else and disappeared just as quickly as they appeared — a foreshadowing, perhaps, of what would come.

One year later, the Arizona Supreme Court admonished Rhodes for representing the Quartzsite protesters without a license and fined him $600. Even afterward, Rhodes continued to represent two clients in Quartzsite, filing several federal lawsuits on their behalf until the Oath Keepers' widespread public reach demanded too much of his time.

As Forbes reported, citing federal court records, the Montana review board admonished Rhodes for abandoning the very blogger he came to Arizona to represent. As Jones wrote the judge in a federal lawsuit, “I am the plaintiff in the above titled action. … I have been unable to reach my attorney, Elmer Stewart Rhodes, for several weeks.”