Leaders of the Islamic Center of Pittsburgh say the shooting of a Muslim taxi cab driver by a passenger on Thanksgiving Day was a hate crime.

Police in Pittsburgh are investigating the shooting of a 38-year-old Moroccan cab driver. There has been no arrest.

The cab driver picked up a fare near a casino about early Thanksgiving and began asking the driver if he was a "Pakistani guy."

The driver responded, “No, I’m from Morocco. But I’m an American guy,” the Pittsburg Post-Gazette reported.

The passenger then began talking about ISIS terrorists killing people, prompting the driver to say, “Actually, I’m against ISIS. I don’t like them. I even told him that they are killing innocent people.”

At that point, the passenger “began to satirize Muhammad, my prophet, and began to shift to his personal life. He mentioned that he has two kids and was in prison for some time,” the driver told the newspaper on the condition of anonymity because of concerns about his safety.

When the cab got to its destination, the passenger said he had to go inside a residence to get his wallet to pay the driver, but returned carrying a rifle.

“I noticed him coming toward me,” the driver said. “I didn’t hesitate. I [made] a fast decision to leave and drove my taxi away because I felt he was going to do something. There is danger. He would shoot me or something. I felt like he had the intention to kill me.”

As he sped away, the driver heard a couple of gunshots, one of which shattered the back window of the cab, the bullet striking him in the back. The victim, who fears for his safety and asked not to be publicly identified, was listed in stable condition today in a Pittsburg hospital with the bullet still lodged between his shoulder blades.

Pittsburgh police “have not determined whether the incident was motivated by the driver’s race or religion,” the newspaper reported. 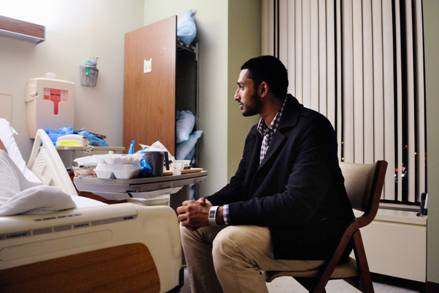 Wasiullah Mohamed, executive director of the Islamic Center of Pittsburgh, sits by the hospital bed of a cab driver shot on Thanksgiving. (Source: Pittsburg Post-Gazette)

But Wasi Mohamed, the executive director of the Islamic Center of Pittsburgh, said there’s no doubt in his mind the shooting was a hate crime. He expressed frustration and impatience with the investigation.

“Very simply, this is a hate crime and it must be treated as such,” Mohamed told the Post-Gazette. “It is heartbreaking to see a horrible crime such as this committed in Pittsburgh, a city that on the surface is making attempts to be more welcoming.”