Law enforcement containment roadblocks are now in place around the Malheur National Wildlife Refuge where an unknown number of armed, antigovernment occupiers remain, but the FBI remains committed to a peaceful resolution, Greg Bretzing, the special agent in charge of Oregon, said at a press conference in Burns.

“I will say that the armed occupiers have been given ample opportunity to leave the refuge peacefully [and] … opportunities to negotiate,” the FBI official said.

“As outsiders to Oregon, they have been given the opportunities to return to their families and work through the normal legal process to air their grievances,” Bretzing said.   “Instead, these individuals have chosen to threaten and intimidate the America they profess to love and, through criminal actions, bring these consequences upon themselves.”

The FBI regional boss, Harney County Sheriff Dave Ward and Bill Williams, the U.S. Attorney, didn’t take questions, nor did they identify any of eight individuals, including ringleader Ammon Bundy, arrested in an FBI traffic stop.  It occurred just before sunset Tuesday away from the refuge as leaders of the anti-federal government occupation attempted to drive to John Day, Ore., for a community meeting about their plan to turn federal land over to counties.

“Eight people were arrested and one man died as we attempted to take him into custody,”  Bretzing said, adding that he couldn’t provide specifics because of the ongoing investigation.

“Yesterday the FBI, with our partners took the first steps to bring this occupation to a conclusion,” Bretzing said.

The tactical decision to stop Bundy and his associates traveling in two vehicles was a plan intended “to assure that we could do so peacefully and safely out of harm’s way of citizens here in the county, removing the threat of danger from anybody who might be present,” he said.

Robert LaVoy Finicum, an Arizona rancher who previously said he’d rather die in a gun fight with law enforcement than spend the rest of his life “in a concrete box,” has been identified in media accounts as the victim. 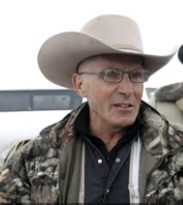 In at least one social media report, one of the occupiers said Finicum was fatally shot after he drove his truck around a police roadblock on U.S. Highway 395, north of Burns, before it became stuck in the snow as other law enforcement vehicles closed in. Finicum, who was armed, jumped out of his vehicle and failed to heed orders to surrender and instead charged toward officers and FBI who fired the fatal shots, the media post said.

“It didn’t have to happen,” the emotional-sounding sheriff told reporters. “We all make choices in life. Sometimes our choices go bad.”

“I’m disappointed that a traffic stop yesterday that was supposed to bring peaeceful resolution to this ended badly,” Ward said.

The Harney County sheriff said multiple law enforcement agencies, including his 5-man department, “put a lot of work into putting together the best tactical plan they could, to take these guys down peacefully and find some resolution to these issues that we’re going through in our community.”

“I’ve been working on a peaceful resolution to this problem since Nov. 5 when several of the individuals arrested yesterday came into my office,” Ward said.

Without naming any of the participants, who wanted him to intercede and protect Burns area ranchers Dwight and Steve Hammond from reporting to federal prison on Jan. 4 for arson fires on federal land, the sheriff said the out-of-state activists presented “ultimatums that I couldn’t meet. I’m here to uphold the law.”

The illegal occupation by Bundy and others at the federal wildlife refuge and crimes committed there “have created a lot of stress in our community,” Ward said.

“It hasn’t been just isolated to the refuge,” the sheriff said, adding that’s “a point that gets missed quite a bit.”

“Some of these folks have spent a lot of time in town, trying to stir some issues within the community,” Ward said. “If it was as simple as just waiting out some folks down there to get out of some buildings, we could have waited a lot longer. But this has been tearing our community apart. It’s time for everybody in this illegal occupation to move on.”

“There doesn’t have to be bloodshed in our community,’’ the Harney County sheriff said.

Those who “have issues with the way things are going in our government” have a responsibility as citizens to act in an appropriate manner, Ward said.

“We don’t ‘arm up’ and rebel,” he said, but rather should “work through the appropriate channels.”

Bill Williams, the U.S. attorney for Oregon, who traveled from Portland to Burns for the mid-day press conference, told reporters the community of Burns and Harney County clearly have been “disrupted by the armed occupation.”

“We continue working toward resolution and will do so with the primary goal of restoring normalcy to this community,” the state’s top federal law enforcement officer said in his first public comment on the Malheur occupation.

The arrests came a week after Oregon Gov. Kate Brown spoke publicly for the first time about the Malheur occupation after being told by federal officials to remain silent as the FBI said it was taking a “deliberate and measured” response without initially setting up roadblocks.

Turning up the heat, the Oregon governor called the White House, the FBI director and the U.S. Attorney General, demanding that the FBI take action and “move quickly to end the occupation and hold all of the wrongdoers accountable.” The following day, an FBI negotiator made contact with Ammon Bundy via cell phone as news reporters listened in on a road near the Burns airstrip where the FBI established a command post. But those negotiations went nowhere when Ammon Bundy wouldn’t participate in a follow-up session with the FBI negotiator.

Word of Finicum’s death lit up social media. When the two vehicles were stopped, “everyone obeyed orders to surrender except” Finicum and Bundy's brother, Ryan Bundy, who was shot and wounded, CNN reported.

Already, antigovernment and militia groups -- including the Bundy family that was behind a still-unresolved standoff with federal authorities in 2014 -- are spouting conspiracy theories that Finicum was unarmed, had his hands up and was shot and murdered.

As those arrests were occurring north of Burns, other authorities set up roadblocks stopping traffic in-and-out of the Malheur National Wildlife Refuge, 30 miles south of Burns, where the occupiers took control on Jan. 2. Authorities reportedly were asking remaining occupiers there to leave, but it’s unclear how many have responded.

Those remaining inside the Malheur complex were believed to include Jason Patrick and Blaine Cooper. Patrick told The Washington Post that the arrests don’t change his group’s demands. He wouldn’t tell the newspaper how many people remain at the refuge, but said "they don’t plan to pick up and leave because of the day’s events."

The FBI and the Harney County Sheriff’s Office, assisted by the Oregon State Police and sheriff’s departments from throughout the state, have set up roadblocks and a perimeter around the refuge, initiating what authorities describe as”containment with checkpoints."  They say they will arrest any unauthorized people attempting to travel into the refuge.

Those remaining at the refuge posted a chaotic YouTube video, frantically calling on armed militia and antigovernment groups, including Oath Keepers, the Pacific Patriots Network and assorted III Percenters to “come to the rescue.”

“This is a call-out to the membership of Operation Mutual Defense and friends,” said a Facebook post by Gary Hunt, identifying himself as speaking for the “Outpost of Freedom in Burns, Ore.”  “To members of Operation Mutual Defense, this is an emergency,” the post said, saying fellow Patriots had pledged “to respond to overbearing actions by the federal government that has become threatening to life, liberty or property.”

“You have an obligation to proceed to the Harney County Resource Center,” he said, referring to the national wildlife refuge Bundy and his followers renamed as part of their failed effort to turn the 187,757-acre preserve over to the county. The refuge is not only home to migrating birds and other wildlife, it also contains significant American Indian artifacts.

It wasn’t clear how many – if any -- other antigovernment and Patriots groups would respond to the plea for assistance from those occupiers remaining at the Malheur complex, where 17 employees of the U.S. Fish and Wildlife service and the Bureau of Land Management work.

But it was clear that anyone responding wouldn’t have easy, unrestricted access to Malheur compound as has existed, creating almost a militia-circus atmosphere the past three weeks, with daily press briefing by Bundy, Finicum, and a host of social media postings showing occupiers having free reign with government computers and equipment and Indian artifacts.

“In recent days, it looked as if about 40 people were staying in the [refuge] buildings, including women and children,” the Oregonian reported.  One of those still there, the paper said, is Ammon Bundy’s wife, Lisa. 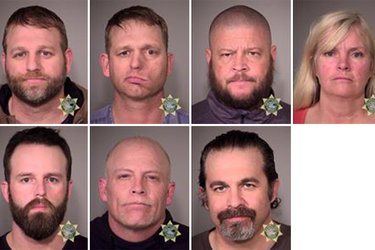 Jon Eric Ritzheimer, 32, a key leader of the armed occupation who recently left the refuge for his home in Arizona, surrendered to authorities in that state after learning there was a federal warrant for his arrest, the FBI said.

Ammon Bundy’s father, Cliven, still hasn’t been arrested or charged with an April 2014 standoff with federal authorities at his ranch near Bunkerville, Nev., where armed militia members pointed assault rifles at federal agents. That standoff came when authorities attempted to round up Bundy’s cattle that have grazed on BLM lands while Bundy has refused to pay $1 million in grazing fees to U.S. taxpayers.

“Isn’t this a wonderful country we live in?" Cliven Bundy said when the Los Angeles Times informed him about the arrests and the death.

“We believe that those federal people shouldn’t even be there in that state, and be in that county and have anything to do with this issue,” the Nevada rancher said of the FBI.

“I have some sons and other people there trying to protect our rights and liberties and freedoms, and now we’ve got one killed, and all I can say is, he’s sacrificed for a good purpose,” Bundy said.