Amid comparisons to Ruby Ridge and Waco, anger is pervasive on the far right, but militia leaders are mostly calling for ‘cooler heads’ to prevail.

While most of the mainstream media and other observers of the standoff at the Malheur National Wildlife Refuge in eastern Oregon took a wait-and-see approach to the arrests of eight of the militants involved – and particularly the death of a ninth, Arizona rancher Robert “LaVoy” Finicum, who was gunned down during the roadside confrontation just outside of Burns – there was little doubt among militia supporters on the far right about the meaning of it all.

The “feds” have declared war on them.

"It appears that America was fired upon by our government," one of the militants wrote on the Bundy Ranch Facebook page. "One of liberty's finest patriots is fallen. He will not go silent into eternity. Our appeal is to heaven."

“Tonight peaceful Americans were attacked on a remote road for supporting the Constitution,” read a graphic meme accompanying the post. “One was killed. Who are the terrorists?” 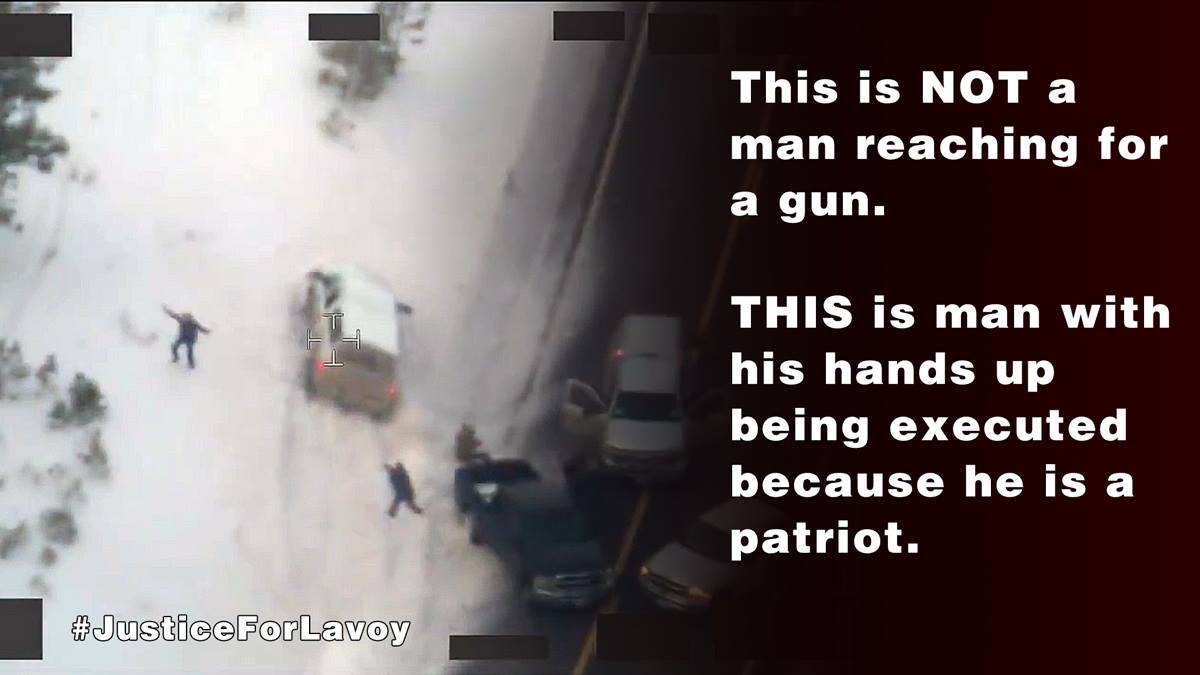 Perhaps the most striking declaration came from one of the militants still occupying the refuge, who appeared in a video released from the compound showing the men using earth-moving machinery to apparently dig a trench and create an earthen berm, while he and others patrolled with their assault-style rifles and ranted at the camera, pleading to their fellow “Patriots” to come and aid them.

“There are no laws in this United States now!” the man declared angrily. “This is a free-for-all Armageddon. Any LEO or military or law enforcement or feds that stand up and f--- their oath — don’t abide by their oath — are the enemy!”

“If they stop you from getting here, kill them!”

Leading the parade of declarations that Finicum was mowed down in cold blood by FBI agents was Michelle Fiore, the Republican legislator from Nevada who has been a supporter of the Bundy family since their April 2014 standoff in that state. She sent out a tweet on Tuesday night making that very accusation, and it immediately spread like wildfire: “My heart & prays [sic] go out to LaVoy Finicum's family he was just murdered with his hands up in Burns OR.”

“LaVoy has left us, but his sacrifice will never be far from the lips of those who love liberty,” read another post on the Bundy Ranch page. “You cannot defeat us. Our blood is seed.”

Northwest “Patriot” leaders also chimed in. “It’s a dark day in America, a dark day for liberty,” said Washington “liberty speaker” Gavin Seim, who warned that “we stand on the brink of revolution.”

“We can no longer allow the government to murder and abuse and terrorize,” he declared in a video released Wednesday. “Will we allow this government to continue slaughtering, and to set an example that we must bow to them alone? …

“These criminals spilled the blood of patriots,” he continued. “They declared war on law and liberty. And this has been coming for a long time.”

“I'm beyond pissed,” declared another “Patriot” named Denise Copper in a comment on the Bundy Ranch page. “They murdered an American. This intimidation has strengthened my resolve. We must rise up and take our country back, now!”

“What the government did is kill someone in order to take a rancher’s land,” wrote Facebook user Celesta Piliponis. “This is what the whole protest is all about … The BLM is doing it all over the U.S.”

“We’re having our constitutional rights stolen right out from under us by a corrupt government because too many people are uninformed. One day we are going to wake up and recognize we could have prevented this.”

Although Ammon Bundy’s attorney delivered a message to the men still occupying the refuge center urging them to leave, that message was greeted with skepticism. A post on the Bundy Ranch Facebook page – which was later removed – insisted instead on making a call to arms.

“From Ammon’s wife, Lisa: Ammon would not have called for the patriots to leave,” it read. “We have lost a life but we are not backing down. He didn’t spill his blood in vain! Hold your ground … Ranchers come and stand! Committee of Safety come and stand! Militia come and stand!”

Another occupier insisted that their fellow militiamen had a moral duty to come to their aid.

"You have an obligation to proceed to the Harney County Resource Center [the occupiers’ name for the refuge center] immediately, in order to protect the patriots still there," declared a militant named Gary Hunt on the Operation Mutual Defense discussion board. "If you fail to arrive, you will demonstrate by your own actions that your previous statements to defend life, liberty, and property were false."

“I’m putting III Percenters of Washington state on standby,” read a Facebook post from another Northwest “Patriot.” “Prepare yourselves. FBI, Oregon state patrol and the county sheriff ambushed their convoy. They fired on them before they could even got stopped. They shot these men before they could even get stopped. They shot these men with murder in their hearts.”

However, most of the leaders of the Northwest “Patriot” contingent were reluctant to issue any kind of clarion call, and instead counseled caution. The Pacific Patriots Network, one of the Bundys’ chief militia support groups, issued a statement: “We will not pursue any action until all of the facts have been pieced together regarding the traffic stop and the arrest of Ammon Bundy. During this time, cooler heads must prevail. We do not wish to inflame the current situation and will engage in open dialogue until all of the facts have been gathered.”

Similarly, the Douglas County, Ore., chapter of the Oath Keepers told people to stay home: “All those wishing to go and support the Patriots in Burns, OR, are being asked to stay put temporarily,” read their statement. “The reason for this will be given Thursday night at the Douglas County general meeting of DC Oath Keepers.”

And the main website of the “Three Percenter” militia movement similarly shut down revenge talk, saying “there is no call to arms at this time. There is no request for people to go to Oregon. The refuge and surrounding areas are under federal control and anyone traveling there to show support is being turned around and/or taken into custody. Right now, we ask that all patriots see this as a victory in the sense that there was no slaughter, like was asked, and that our demands were met. We are not looking for ‘vengeance’ for the fallen.”

Conspiracist radio host Alex Jones, a longtime antigovernment movement supporter who was skeptical of the standoff from the start, wrote: “This is not our Lexington.  It’s not our Concord.  It’s not the kick off of some new physical war. We’re in an information war, we’re actually starting to win it. So the answer is not physically to start going after the Feds, or the police, or any of this.”

However, that did not prevent Jones from indulging in the theory that Finicum had been murdered with his hands in the air, posting an “eyewitness” account from a woman who claims to have been riding in the same car as Finicum.

Many of the “Patriots” compared the Oregon showdown with two events that helped spur the movement into life in the 1990s: “We’ve got a third one. There was Ruby Ridge and Waco, now there is Burns,” B.J. Soper of the Pacific Patriots Network told Raw Story.

That view was pervasive on the far-right discussion boards, including those at neo-Nazi websites such as Stormfront, where one of the commenters acidly observed: “Just typical of the New World Order … the Devil’s Government. Should be a lesson for others you can’t win in this Empire. Randy Weaver and many others have been right over the years. All fought the good fight and so have the militia. Should be a rally call for our people working together for a secure future for our people.” 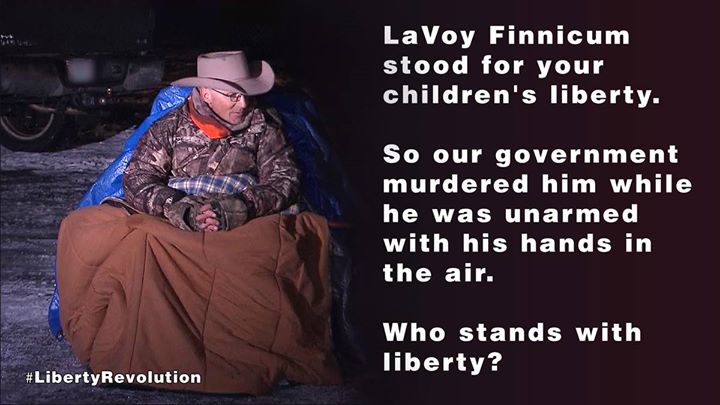 One of the Internet memes that appeared after Lavoy Finicum's death. (Source: Stormfront)

In case anyone there was unsure about the relevance of the showdown, a Stormfront “sustaining member” named “PrairieSister” chimed in: “This is a direct, frontal assault on White America by the hostile, occupation government in Washington, D.C. The authorities shoot and kill a White man for exercising civil rights while blacks, browns and their liberal enablers get protected and publicly lauded for exercising the same civil rights.”