Led by a woman bearing a Confederate flag, several hundred people marched on the Idaho Statehouse on Saturday in Boise demanding passage of a bill that would allow permitless “open carry” of guns in the state. 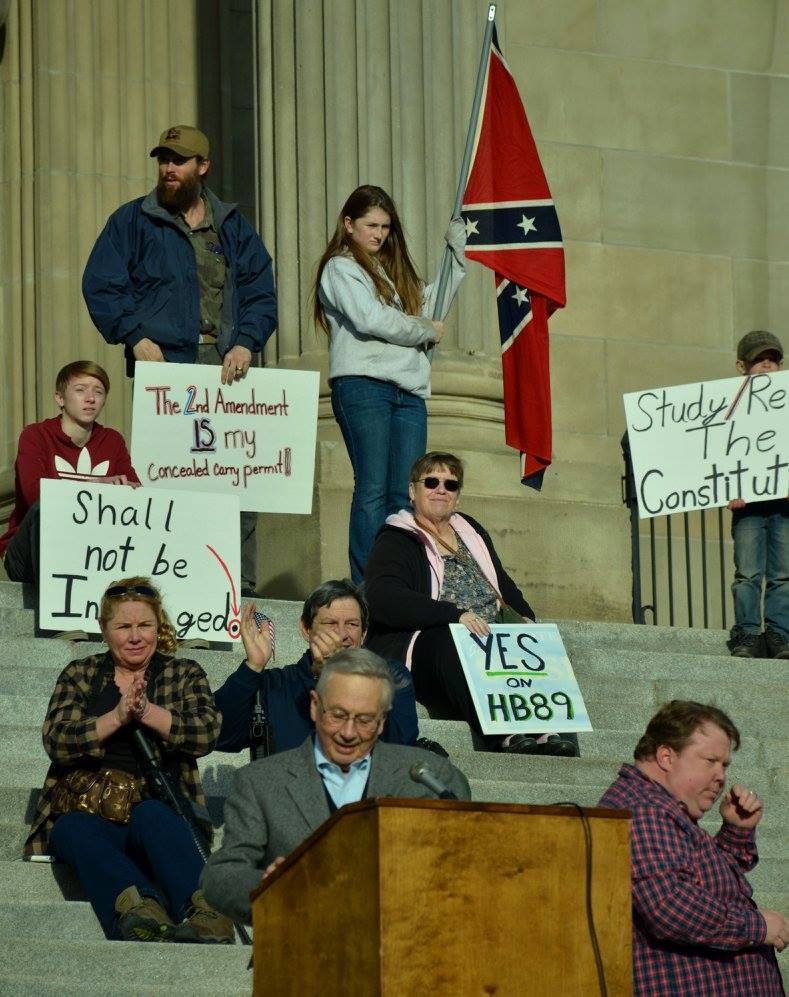 Larry Pratt speaks to the crowd of several hundred on the steps of the Idaho Statehouse on Saturday. Photo courtesy of 43rd State Blues.

The event’s featured speaker was gun-rights advocate Larry Pratt of the Gun Owners of America, who told the crowd that “guns and Bibles” were “the foundations of our liberty,” and urged them to run primary election campaigns against any legislators reluctant to support the legislation.

Organized by the Idaho Second Amendment Foundation, the march to the Capitol steps included large numbers of people carrying their weapons openly. A number of children were among the marchers, some of them carrying plastic toy guns. 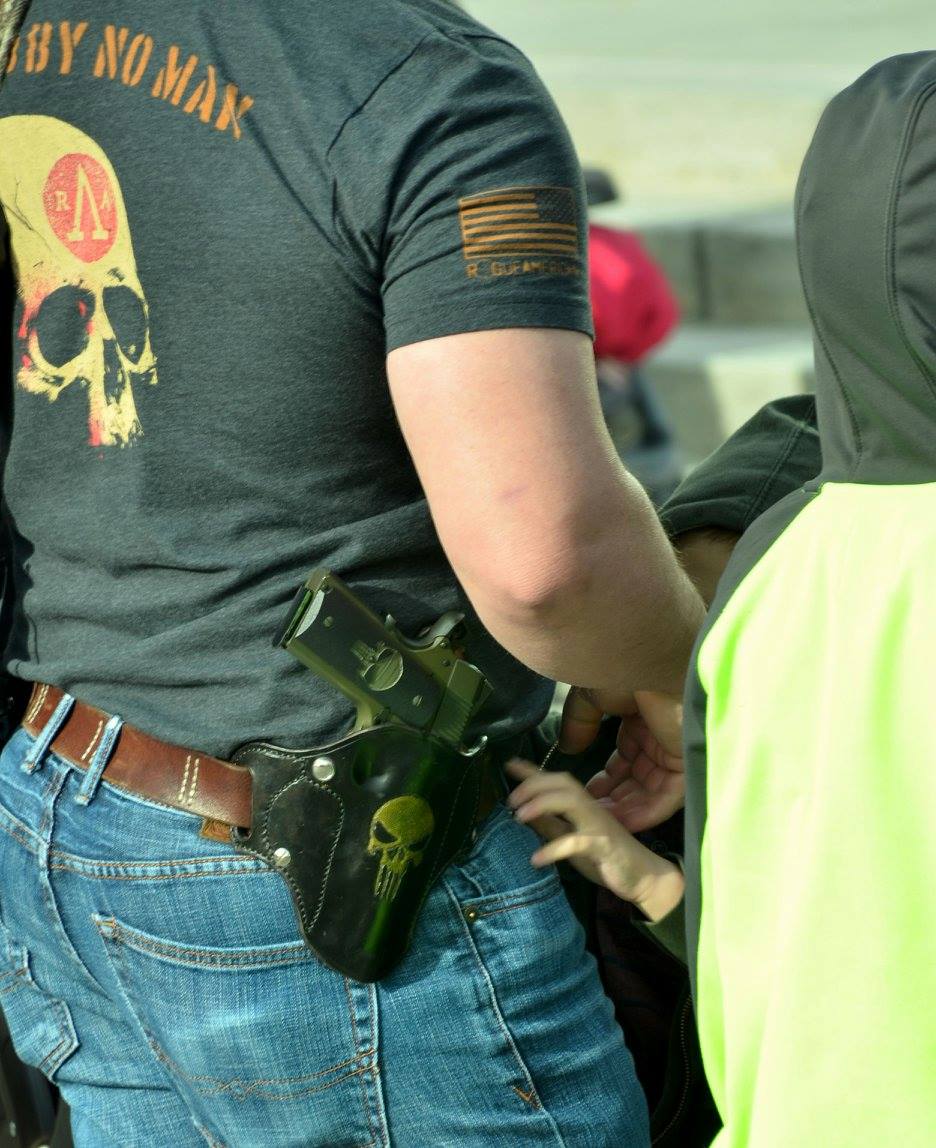 A child reaches for his father's gun while participating in Saturday's march. Photo courtesy of 43rd State Blues.

The marchers assembled downtown at the Boise Center on the Grove and then proceeded from there to the capitol. They were accompanied by a massive police presence, reportedly there at the organizers’ behest.

One participant, Boise resident Tom Row, told KIVI-TV: "I believe that we have to be seen, that people have to see us, that we are real. We are not just a figment of their imagination and these are rights that we believe in. This is what made America great.” 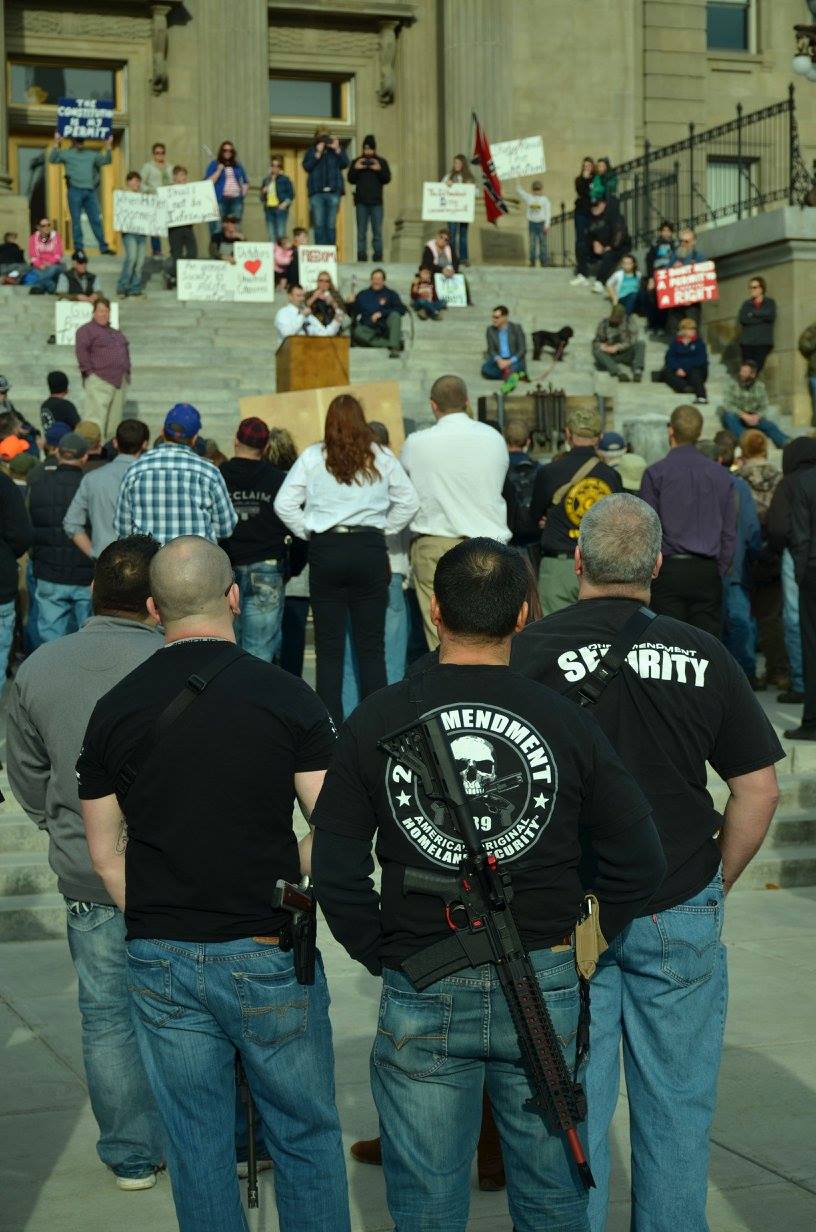 A number and variety of weapons were on display Saturday at the march. Photo courtesy of 43rd State Blues.

All of the speakers decried the Idaho Legislature’s apparent reluctance to approve House Bill 422, which would allow people to openly carry guns without a permit everywhere they are otherwise legal in the state.

Pratt decried what he called the “stigma” attached to people who carry their guns in public.

“There’s such an animus to regular folks carrying a weapon, particularly a concealed firearm,” he said, and then described two incidents in which gun owners (one of them an Uber driver) allegedly used their weapons to stop would-be killers, both involving concealed-carry permit holders, which he said demonstrated the “advantage of people carrying a firearm.”

“They had permits, it wasn’t permitless carry, but imagine how much we could multiply that if the animus against carry and conceal is removed and people realize that the government so sanctions it, but there’s no permit required, just like I don’t have to have a permit to take a breath,” he said.

Similarly, signs at the rally declared: “An Armed Society Is a Polite Society,” “The Constitution Is My Permit,” and “Freedom: Gun Laws Take It Away.”

And at the top of the steps, the woman who led the parade with her Confederate flag waved it proudly, providing a backdrop for all the speakers.