Presidential candidate Donald Trump -- already trying to explain his apparent ignorance about David Duke and the Ku Klux Klan -- now is being asked how a racist, anti-Semitic, self-made radio show host was given press credentials for a rally in Tennessee.

James Edwards, host of The Political Cesspool, is now bragging about how he was rubbing elbows with the nation’s press corps, at Saturday night’s rally in an airport hangar in Memphis.

In the past, Edwards’ “pro-white” show has hosted several racists, including Duke and the late anti-Semite, Willis Carto. Now Edwards, like Duke, is among growing numbers of white nationalists and white supremacists who are glowing with enthusiasm over the increasing likelihood that Trump will become the Republican nominee for president.

“I attended [the] Donald Trump rally … as a fully credentialed member of the media and enjoyed the unique experience of being able to air a live broadcast of The Political Cesspool Radio Program from inside the press pen while the event was in full swing,” Edwards boasted on his web site.

He may have had a media pass, but Edwards makes his hatred clear. “The only downer was having to work in such close proximity to my ‘colleagues,’” he wrote.

“I really do despise the press and have gotten to the point now where I rarely give interviews anymore,” Edwards said, calling professional journalists “contemptible and obnoxious creatures.”

But he put his dislike for journalists aside to get a front-row glimpse of Trump, his new political hero, and to post a photo of himself with NBC News correspondent Katy Tur. 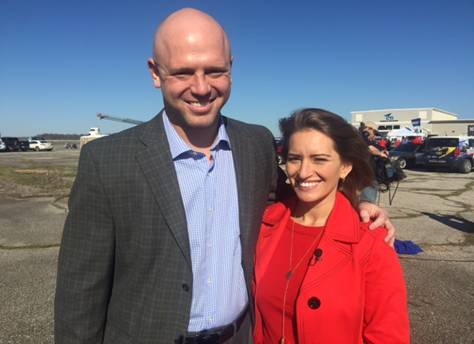 “After getting my start in politics with Pat Buchanan in 2000, Donald Trump will be the first Republican nominee that I have ever voted for,” Edwards wrote. “Buchanan was a man ahead of the times and Trump is his vindicator.”

Edwards, it appears, apparently already thinks Trump is president: “A highlight of the evening was when a scraggly protester attempted to disrupt President Trump’s remarks by holding up an unoriginal sign that read, ‘Make America HATE Again.’

The Cesspool host said the crowd “erupted when a hero emerged to rip the sign to shreds before security could escort the vanquished Social Justice Warrior to the parking lot.”

“The press ate up the confrontation and scribbled furiously to cast this malcontent as someone worthy of praise,” Edwards said.

He said the Trump rally “lived up to my expectations,” offering a testimonial that “the majority of Americans fundamentally agree with us on the issues and that the neo-cons were generals of a phantom army.”

“I am being proven right,” the overtly racist radio show host said.   “Our people just needed a viable candidate and they’ve identified Trump as that man.”

“There is no doubt that Trump’s populism and nationalism is galvanizing our nation and may change the course of American history for the better right before our very eyes,” Edwards said.