Milwaukee Mayor Tom Barrett was among several hundred people who gathered Sunday at a memorial vigil for three victims fatally shot a week earlier by a man who police say apparently targeted them because of race.

“Hate does not drive out hate. Only love can drive out hate,” the mayor told the large crowd who stood in the rain outside a south side apartment where the three victims lived prior to the shooting on March 6.

“We need more loving in this community,” the Milwaukee mayor told the crowd, fox6now.com reported today. The mayor was among a dozen speakers who spoke, lighting candles to remember the victims. 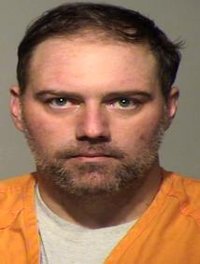 Dan J. Popp, 39, faces three counts of first-degree intentional homicide in the deaths of Jesus R. Manso-Perez, 40,  Phia Vue, 36, and his wife, Mai K. Vue, 32, who all lived in the same apartment complex with the suspect. He also is charged with a fourth count of attempted first-degree homicide for shooting at, but missing, Manso-Perez's 18-year-old son.

At an initial court appearance on Thursday, a judge ordered Popp to undergo a psychiatric evaluation. He is being held under $150,000 bond in the Milwaukee County Jail.

A criminal complaint says Manso-Perez and his son were walking by Popp's apartment on their way to wash clothes, when Popp asked them if they were from and if they wanted a beer.

When Manso-Perez replied he was from Puerto Rico, Popp replied: "Oh, that's why you don't speak English. You're Puerto Rican."

Later, as they returned from a basement laundry room, Popp stood over them armed on a landing. The son told police that Popp fired at his father after saying, “You guys got to go.” Manso-Perez was shot in the head and died on the landing as his teenage son fled, narrowly missing another bullet.

Moments later, police said, the suspect forced his way into the apartment of Phia Vue, his wife, Mai Vue, and their four children, who are members of the city Hmong community. Police said they found Phia Vue dead inside the bathroom of his family's apartment and Mai Vue fatally shot inside Popp's apartment.

The suspect, who is white, dropped his rifle and surrendered as police arrived at the apartment complex.