After leaving the hate movement in a huff several months ago, Morris Gulett is back on the racist scene with a new extremist church, an Etsy site hawking Aryan memorabilia and an enthusiastic embrace of Donald Trump.

Just months after claiming he was retiring as leader of the Aryan Nations, Morris Gulett is back with a new racist and anti-Semitic Christian Identity operation he calls The Church of the Sons of Yahweh.

At the same time, the 60-year-old Louisiana racist is doing some spring housecleaning – selling left-over Aryan Nations memorabilia on the popular Etsy website, which is tailored to sales of handmade and antique items. He’s also embracing Donald Trump.

“Take advantage of the opportunity to own some of the Aryan Nations relics and artifacs [sic] that exists from it's [sic] hay day [sic].” says the Etsy site description for an “Original Bronze Aryan Nations Belt Buckle.”

It’s listed for sale for $122.62 Swiss francs, or about $128 in U.S. dollars. It’s unclear why the seller, “MoGulett,” listed the item for sale in francs when the site says the item “only ships within the United States.”

The description says the coins are “solid brass with an antique bronze finish. Quite possibly the only Aryan Nations coins in existence today.” 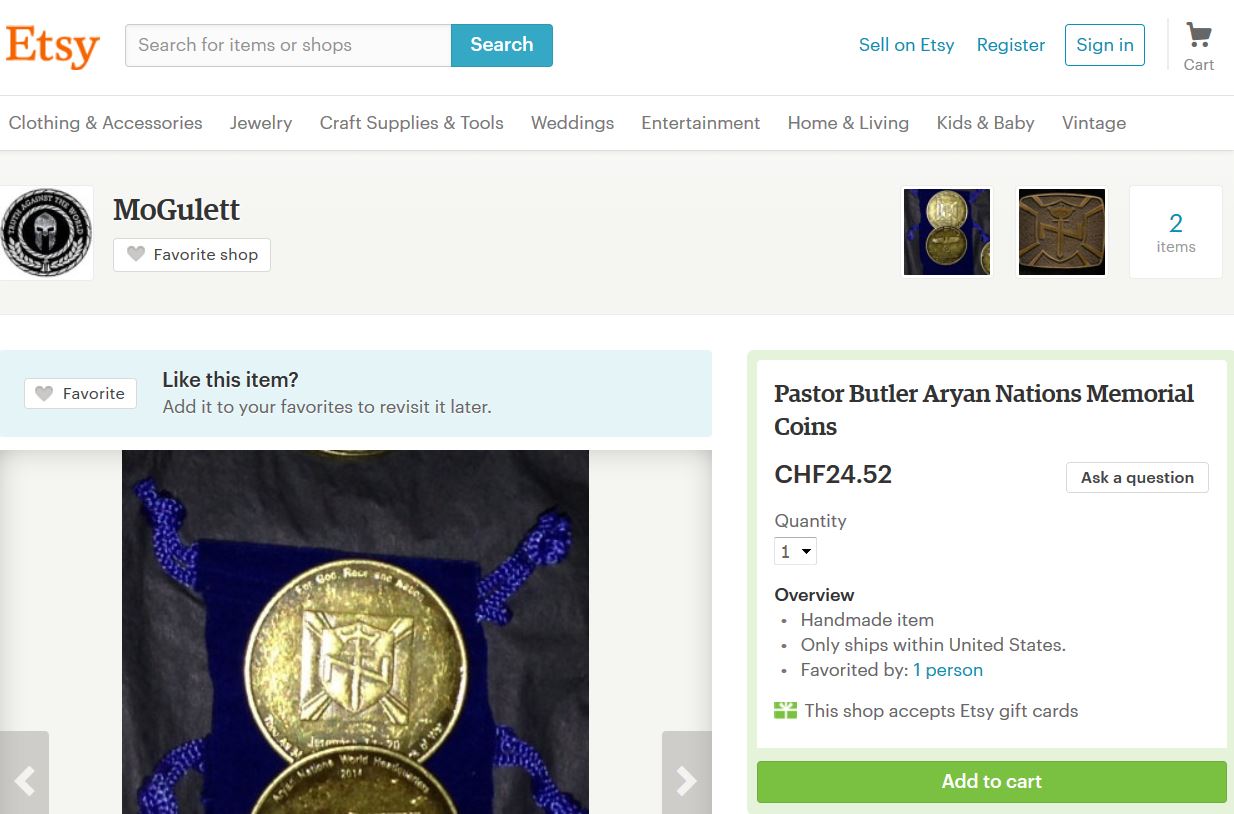 It’s unclear if the sale of such neo-Nazi items from a widely recognized hate group violates Etsy’s terms of service.

Meanwhile, Gulett’s new Christian Identity operation, tied to a website called molon-lave.com, has nothing for sale yet, but it actually looks and sounds much like the Aryan Nations site he abandoned in mid-November. Except for one thing:  nearly all references to the Aryan Nations and Richard Butler have disappeared.

“For all intents and purposes, the Aryan Nations Pastor Butler created in the mid-seventies is dead and gone,” Gulett said in November when he took down his Aryan Nations site.

Gulett said at the time he was throwing in towel on the movement because all that remained “are a few good dedicated souls and a good many malcontents who wrongfully call themselves Aryan Nations, but will never be anything but degenerate prison gangsters and filthy unwashed wanna be bikers.”

That is an apparent reference to Dennis McGiffen, a former Gulett ally who heads up the Sadistic Souls MC (for motorcycle club), based in East St. Louis, Ill., with “patched” members in several states. McGiffen had a falling out with Gulett in early 2014 when Gulett accused the biker group of being “drunks and race-mixers” who do little more than post pictures of themselves with their middle fingers raised.

McGiffen responded, calling Gulett a “rabbi,” a “costume Nazi” and a “worthless welfare king” deserving of the “Sadistic Souls MC A------ of the Year 2014” award.

McGiffen was a grand dragon in the Ku Klux Klan and was implicated in a 1998 plot to blow up the Southern Poverty Law Center and assassinate its co-founder, Morris Dees. McGiffen, who did prison time on a federal weapons charge, later left the KKK, calling it “wimpy.” Now he and his fellow Sadistic Souls bikers are aligned with the United Klans of America – the so-called “black and silver solution”—which plans to stage five weddings at a double-cross burning this month in Alabama.

Gulett, meanwhile, who said he was “retiring from the front lines” of racism just five months ago, is back at it, using the same PO box in Converse, La., that he used when he was the self-appointed leader of the Aryan Nations. His long-time racist associate, Gary Farnsworth, is listed as “assistant pastor” of the new church.

“We believe that the White, Anglo-Saxon, Germanic and kindred peoples are the direct descendants of the Adamic man made in the image of YHVH, and were placed here to be the light bearers and supreme ruling race of this lost and dying world,” Gulett write a few days ago on his new site for the Church of the Sons of Yahweh.

His new church claims it stands for “Truth Against the World” and has a new logo incorporating the emblem of the Phineas Priesthood, racists who kill “race-mixers” and Jews.

So, now that he’s back on the racist stage, who does Gulett see as a potential political ally?

He says Donald Trump may be the answer -- someone who “may be sent by God.”

“The ideas that Donald Trump articulates about America now and where America is going as opposed to where it should be going in my opinion is admirable from a Patriotic Nationalists point of view,” Gulett said.

“Looking at all of the candidates and weighing their qualifications and taking into account their faults and virtues, Donald J. Trump looks to be the man most qualified and by far the man most likely to do what he says he will do,” Gulett said. “Without a doubt the Communist Party lead by Hillary Clinton and the Jew Bernie Sanders must be stopped.”