If Reuben T. DeHaan had paid federal taxes on $2.7 million of his income, the amount he’s now accused of failing to report, federal agents wouldn’t have showed up at his rural North Carolina home. 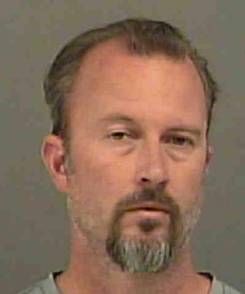 When they got there with court orders earlier this month, the agents not only located business records of the self-proclaimed “medicine man,” minister and tax protester, but they seized illegal firearms, bomb-making supplies, a liquor still, marijuana and a supply of moonshine in an elaborate underground survivalist bunker.

The 43-year-old suspect is now in jail on federal charges accusing him of federal firearms violations, income tax evasion and attempting to interfere with the administration of Internal Revenue laws.

The case of the tax protester who built an expensive and elaborate survivalist bunker and amassed an arsenal of weapons raised eyebrows in North Carolina.

Court documents say DeHaan built his concrete-reinforced bunker in 2014, telling local authorities that he didn’t need a building permit and that if they trespassed on his property, the “Native American Church of Nemenhah, Order of Lehb,” he’d assess them “a civil penalty of One Million Dollars in silver coin.”

About that same time, he filed documents with the Cleveland County, N.C., Register of Deeds renouncing his United States citizenship and claiming he no longer was personally liable for the national debt of the United States. Those acts are similar to those of antigovernment “sovereign citizens” who believe laws, licensing and taxing requirements don’t apply to them.

On April 21, IRS and FBI agents, armed with search and arrest warrants, went to DeHaan residence on Police Club Drive, in the community of Kings Mountain, about 30 miles west of Charlotte.

On the property, court documents say, agents located and searched the fully supplied underground survivalist bunker. It contained various rooms, including living quarters with a significant amount of food and beverages.

The bunker was accessible from exterior “fortified steel doors” and from inside DeHaan’s adjoining residence, which was equipped with a secret false wall passageway with a specially designed hinged stairwell.

“The bunker contained living quarters with a “significant amount of food and beverages” and included two 2,000-gallon water tanks.

Agents also located approximately 70 firearms, including handgun, shotguns and rifles – some of them illegally modified without the required federal licenses.

The bunker also contained, among other items, large quantities of ammunition of various calibers, rifle scopes, 100 feet of bomb fuse, aluminum powder, and one 100-round drum magazine.

During the search, agents also seized two large glass containers of what they believed was moonshine near a still. Fermenting agents and others ingredients to make illegal liquor were found nearby, agents said.

“Based on this information and the scope of the items, it is believed that DeHaan was manufacturing non-tax paid spirituous liquor,” the FBI case agent said in a court document.

During the search of the bunker, the suspect’s home and out-buildings on the property, agents also located and seized “various components that could be utilized to construct a destructive device were found,” the documents say. The components included PVC piping, tannerite, aluminum powder and a fuse.

“Additional items that were located during the search included … approximately one pound of marijuana, marijuana seeds, (4) two oz bottles of THC and several thousands of dollars in cash [and] silver coins,” the documents say.

Companion court documents, filed by the IRS, say DeHaan has not filed a federal income tax return for himself or his various businesses since 1997.

DeHaan claims to be a “Medicine Man” who “provides natural healing services and products to customers for a fee,” an IRS case agent said in the documents.

Claiming he’s a minister of the Native American Church of Nemenhah (NACNEM), “DeHaan’s position on income tax is that all of his earnings from his natural healing business are donations” and therefore income from his business is non-taxable.

Based on a review of DEHANN'S and his businesses bank accounts, DeHaan has earned over $2.7 million dollars in gross receipts from his natural healing business between 2008 and 2014,” the court documents say.

His tax-protester beliefs are outlined in “multiple frivolous letters” he mailed the IRS, claiming he isn’t subject to federal income tax because of his association with the NACNEM religious order,” the documents say.

NACNEM is not recognized by the Bureau of Indian Affairs as a Native American tribe, nor is it a “church” or “religious order” recognized by the IRS because it has not applied for or received a tax identification number or not-for-profit status from the IRS, the documents say.

During an IRS audit in 2014, DeHaan “made false statements to an IRS Revenue Agent regarding his personal income taxes for the years 2008 through 2012.  In one instance, the document say, DeHaan “claimed no knowledge of Precept Management, Inc.” even though he was listed as the sole signatory on the bank account for the business.

DeHaan also told the IRS auditor that money he received from consulting and medicine sales was not taxable because it came in the form of “donations for his NACNEM minister services.” But on his bank account signature cards, DeHaan claimed his business was “for profit.”

During the IRS investigation, two undercover agents made separate health-consulting appointments with DeHaan for a “total body analysis” in 2015 and early this year. He charged $145 for the first health-advice visit and $95 for a follow-up.  He also offered several supplements, essential oils and cleansing products for sale, ranging from $5 to $40.

The court documents say the service fees and products were not available for a gift or donation, but had to be purchased.

In August 2013, after the IRS sent DeHaan a letter asking about his failure to file tax returns, he “sent a frivolous letter” saying the IRS should pay him for advice.

“In the letter DeHaan stated that he recorded a Fee Schedule with Cleveland County North Carolina stating his fees for helping the IRS solve its tax problems, which assistance requires settlement in advance,” court document say.