Since his death on January 26, 2016, Robert “LaVoy” Finicum –– the spokesman for the armed occupation that took place earlier this year at a wildlife refuge in Oregon –– has become a martyr to the antigovernment movement nationwide.

Finicum, who protested alongside antigovernment activists during the standoff between Nevada rancher Cliven Bundy and the federal government on April 12, 2014, cemented his celebrity less than two years later while outspokenly supporting Oregon ranchers Dwight and Steven Hammond, who were sentenced to federal prison for burning public lands.

“I’m not going to end up in prison,” Finicum stated in a news conference after he helped, along with Ammon and Ryan Bundy, storm the refuge. “I would rather die than be caged.”

Finicum’s statement was prophetic. Forty-one days later, he was shot and killed while trying to run a police road block and reaching for a firearm after exiting his vehicle in a frenzy. Almost immediately, his death became a rallying cry for the antigovernment movement, which saw his death as proof positive that the U.S. government was at war with its citizens.

In the wake of Finicum’s death, Hatewatch monitored social media and the Internet for rallies expressly dedicated to his memorial. The results are alarming, and coincide with the explosive growth in the antigovernment movement’s reach over the last eight years.

Between Finicum’s death and the end of April, there have been 82 events across the nation expressly dedicated to his memorial. In general, these were events attended by three or more supporters. Events that did not meet these criteria or could not be verified to have happened were omitted.

The protests have ranged from just a scattering of a few people to over two hundred, while Finicum’s funeral in Utah brought around 700 sympathizers. Each event has played into the conspiracy theory that Finicum was murdered for speaking the truth about federal overreach.

“WE THE PEOPLE Find the Federal Government GUILTY of Conspiracy against Rights And Deprivation of Rights Under Color of Law Against The 16 Patriots + 1 MARTYR,” read one sign at a Finicum rally in Washington state. “If two hands up justifies deadly force then liberty is lost. #IAM LAVOY,” read another at a rally in North Carolina.

Finicum memorials started to grow in popularity after Stand By Me For Liberty, a group made up of Finicum’s family, organized an event on March 5 nationwide. The Oath Keepers endorsed the event on their official webpage and called on supporters in every state to attend.

The significance of how Finicum’s death has galvanized the antigovernment movement cannot be overstated –– but it is not the first time a death has become an ideological driver in the movement. The deaths at Ruby Ridge and Waco proved to be a fountainhead for antigovernment rage that led to the first wave of antigovernment growth in the 1990s, which culminated with the deaths of 168 people in Oklahoma City. 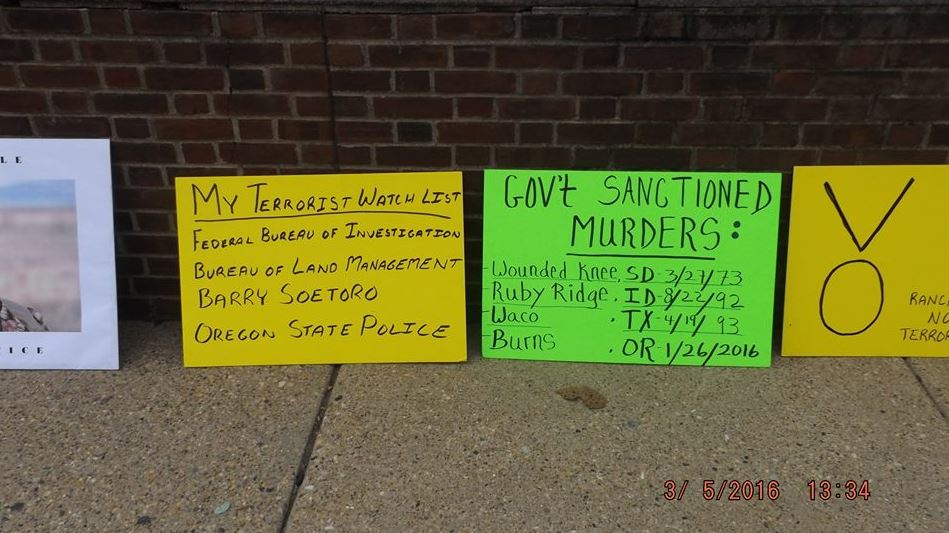 And with the martyrdom narrative surrounding Finicum only growing, already some have seen his death has a call to action.  One Facebook user, who identifies as a Three Percenter, posted a telling warning immediately following Finicum’s death: