A judge ordered a 17 ½-year prison sentence this week for a Virginia man implicated in a conspiracy to rob and kill a silver and coin dealer and use the money to finance a race war.

Robert C. Doyle was one of three men described by authorities as white supremacists who plotted to bomb synagogues and African-American churches in Virginia prior to their arrests last November.

Doyle, 33, pleaded guilty in February to conspiring with Ronald Chaney III, 33, and Charles Halderman, 30, to rob and kill a coin dealer to finance the plot.  Doyle also pleaded guilty to being a felon in possession of a firearm. 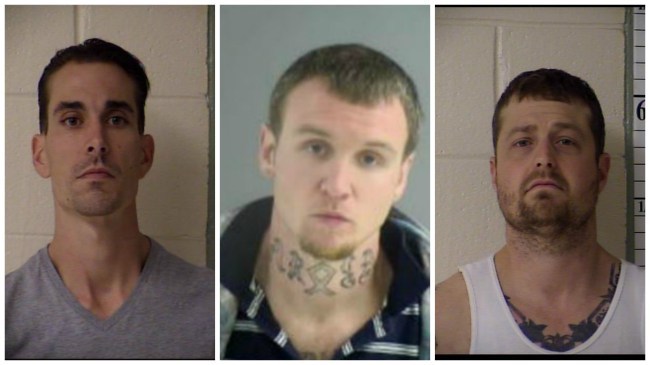 The plot was foiled when the FBI used an undercover agent to secretly record conversations of the co-conspirators, leading to their arrests.

“Doyle concocted a scheme to commit armed robbery of a local businessman and made credible threats to kill the intended victim as an integral part of the robbery scheme,” court documents say.

As part of the conspiracy, Doyle also “initiated an arms deal where several illegal firearms, two with silencers attached, and one explosive device were to be purchased,” the documents say.

At his sentencing hearing Wednesday in Richmond, Doyle apologized to his family and the community, WTVR-TV reported.

The defendant, who has an extensive criminal history, said he was “embarrassed and ashamed about the crimes and called himself a hardworking family man that just engaged in reckless conversations,” the station reported.

Prosecutors asked for enhanced sentence for Doyle because of his extensive criminal record that began when he was 17.

“Doyle’s blatant disregard for the law, as well as the safety of individuals in the community at large, provides ample reason for the Court to grant an upward variance,” prosecutors said in court filings.

When he’s released from prison, Doyle will be prohibited from possessing firearms or being affiliated with white supremacy groups as release conditions imposed by the judge.

Chaney and Halderman also have pleaded guilty and await sentencing.