White supremacists, nationalists and antigovernment conspiracists feverishly embrace the Republican candidate as their Great White Hope, not to mention a 'Patriot sleeper cell.'

It’s a happy time out there in the land of the extremists.

“White men in America and across the planet are partying like it’s 1999 following Trump’s decisive victory over the evil enemies of our race,” exulted Andrew Anglin at the neo-Nazi website The Daily Stormer.

"He is getting white people excited for the first time in my memory,” said a Stormfront participant. “Look at the crowds when he gets the cameras to pan out. They're huge (or should I say YUGE?) and almost 100% white. It is fantastic to see.”

Conspiracy-meister Alex Jones, in the meantime, embraced Trump as being "basically like a Patriot sleeper cell," but warned him darkly against betraying their movement to fight "the New World Order." 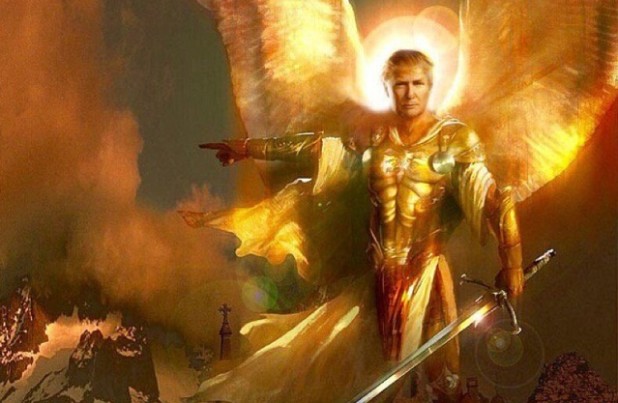 One of Andrew Anglin's favorite Trump memes, selected for The Daily Stormer.

The Internet was buzzing this week with the celebratory boasts of a broad range of right-wing extremists, from the ranks of neo-Nazi haters, Klansmen and other white supremacists, to the hunkered-down conspiracy-spinning paranoids of the antigovernment movement – all of them cheering on their new hero, Donald Trump, after he secured the Republican nomination for the 2016 election this week. Most of them made it clear he was perhaps the first presidential candidate most of them could get behind unreservedly.

“Why not take a chance on him?” asked one Stormfront participant. “The choice of Clinton vs c---servative isn't particularly good. Trump, by contrast, has said/proposed many things that are more implicitly pro-white than anything offered by an American politician in my lifetime.”

“Trump doesn't have to support our movement to help us save our people from what is being done to us: All he has to do is stand up for what's right and it will badly damage the anti-White agenda,” observed another Stormfront member. “They know this. They cheat to get ahead. If cheating is prohibited, their power evaporates.”

Anglin, who also posted a long page’s worth of exultant memes celebrating Trump’s ascension, was downright giddy at The Daily Stormer: “This is a buzz that won’t soon wear off. Sort of like an IV drip of pure cocaine. Or perhaps like having a computer chip implanted in your brain which electronically stimulates continual dopamine release.”

Anglin also promoted a bizarre “parody” video made by someone under the nom de plume “Aryan Wisdom” in which the faces of Trump, President Obama, Hillary Clinton, and a host of other political and media figures have been superimposed over the action of the film 300, and the soundtrack features actual speeches by Trump.

It transforms that movie’s original historical narrative (it retells the tale of the Battle of Thermopylae) into one in which Trump becomes the hero who saves white civilization from the ravages of the brown horde led by Obama, whom we see Trump killing by shoving him into a bottomless pit.

Other white supremacists weighed in on the Trump candidacy. Former Klan leader David Duke declared that Trump had scored a great victory for the cause of whites simply by becoming the GOP nominee:

The Trump campaign at a whole series of levels is a great opportunity for us to expose the people who really run the Republican Party, who run the Democratic Party, who run the political establishment and who are leading us all to disaster. Even though Trump is not explicitly talking about European-Americans, he is implicitly talking about the interests of European-Americans.

Duke went on to explain how the Trump victory was guaranteed to help spread their ideology and to discredit the Jewish “neo-conservatives” he has long claimed control the Republican Party:

I think that these Jewish extremists have made a terribly crazy miscalculation, because all they’re really going to be doing by doing a ‘Never Trump’ movement is exposing their alien, anti-American, anti-American-majority position to all the Republicans and they’re going to push people more into awareness that the neocons are the problem, that these Jewish supremacists who control our country are the real problem and the reason why America is not great.

“Jewish chutzpah knows no bounds,” he observed, with no hint of irony.

Trump, for his part, rebuked Duke’s endorsement and his remarks, publishing a statement saying he “totally disavows” Duke’s remarks.

“Antisemitism has no place our society, which needs to be united, not divided,” Trump said.

Trump’s disavowals, however, did nothing to stop the flow of pro-Trump proselytizing that emerged from the extremist right.

James Kirkpatrick of the white-nationalist webzine VDare chimed in with an encomium for the candidate:

Trump is taking the nationalist impulses the Republican Party has used for years and putting them at the forefront of his new political movement. He’s downplaying some of the hardcore social issues which conservatives have already lost on anyway. He’s abandoning rhetoric about slashing programs which actually benefit the Republican Party’s core constituents. And he’s tapping into a Narrative of national redemption which is deeply felt all over the country.

Kirkpatrick concluded that “the Republican base has caught on. They have chosen to displace the Beltway Right entirely. And they don’t want the same old goofy slogans—but a nationalist movement that will actually fight for them.”

Two noted white nationalists, Matthew Heimbach of the pro-Trump Traditionalist Worker Party and his radio cohost Sven Longshanks, held forth on their daily radio show, declaring that “Trump has changed the face of politics around the world with his refusal to bow down to the monied interests and by doing so he has encouraged others to do the same.”

The fires of nationalism, the fires of identity, the fires of anger against the corrupt establishment are arising all around Europe, all around America, all around the entire world. So we just need to strap in, because the future is gonna definitely be interesting, and I believe we could have a switch in our direction even more…Hail, Emperor Trump! And hail, victory!

Over at Stormfront, the overt neo-Nazis posted memes such as this one: 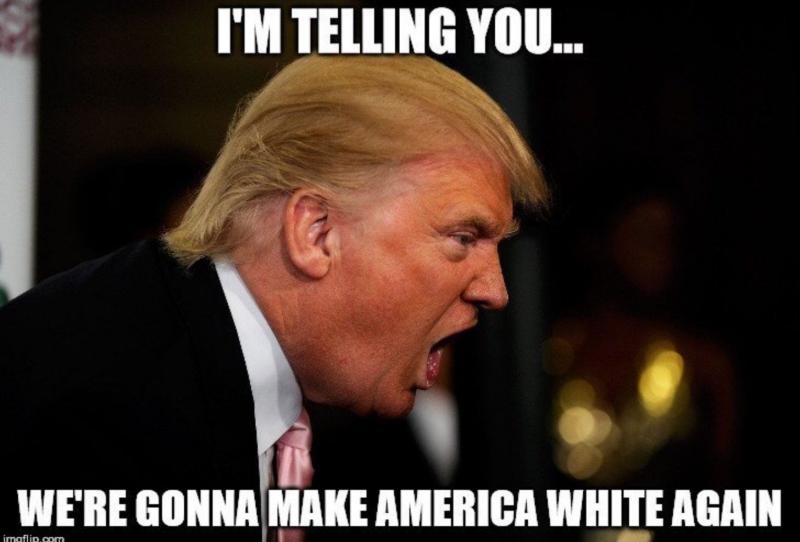 A popular meme at Stormfront this week.

One such post then added, with a typically disturbing twist:

Sieg heil! Whether Trump's a full White Nationalist or not is irrelevant at the moment, since getting one into the White House is impossible at the moment. What I see is a strong White leader who is completely unafraid of speaking his mind and shattering Political Correctness.

Also, think about this: If Trump is assassinated before the election, it will cause an awakening in Whites we haven't seen in many years! Same result if he doesn't get elected or if he's impeached. More Whites will see the political system for the joke it is. And think about how good he is for our movement! Whether you support the guy or not, you cannot deny he is having a massive impact on White America! What we need to do is somehow use his massive support to boost the White Nationalist movement! Perhaps make posters and post them around your neighbourhood, or distribute flyers! Do something positive for your movement instead of wasting time wallowing in defeatism and belittling what could be a great opportunity for us! Love him or hate him, Donald Trump is making waves in all directions. Why not take advantage of that?

Others at Stormfront were similarly paranoid: “I think they are terrified of Trump. I think they will resort to pretty much anything to get rid of him. I hope Trump's advisors have the sense to see that and prepare for it,” one wrote.

That thinking went into their speculation about a potential running mate as well. “His VP must be a potentially great White (Pro-White) (Pro-America) (America-First) president,” wrote a Stormfront poster, “in case the jews (and that's who it would be, regardless of who pulls the trigger) -- in case the jews assassinate Donald."

“It has to be someone at least as tough as Trump on all the important issues and who is certified to be anti-establishment,” clarified “Phoenix 1933. “Otherwise Trump would be a tempting assassination target. Actually Trump should probably get someone even tougher and more anti-establishment than himself, someone the Jews would be terrified of becoming president.”

And as often happens on the far right, the paranoid laser beam showed signs that it might eventually turn on the candidate himself. At his mega-conspiracist Infowars website, Alex Jones – who has been among Trump’s most ardent fans, recently worrying as well about a possible assassination – sounded a warning to the candidate that he also better deliver on their otherworldly expectations.

Jones’s young daughter, it seems, is also a Trump fan, and created some “Vote for Trump” placards to hand out to visitors, which apparently brought out Jones' protective instincts:

I’m gonna tell Trump something right now. I like you, I think I’ve assessed you correctly. You’re trying to force the globalists to capitulate to you, that’s why they don’t like you, you’re showing how weak they are. You’re a man of destiny, I have a lot of respect for you. And I know you understand building something for humanity is the ultimate strength, not being a parasite.

So I believe you’re a builder and an empowerer, you’re not perfect, nobody is, but if you go sideways on us, and you betray my daughter, or anybody else, I want Donald Trump to know something: I’m gonna do everything I can to politically come after you, and it’s not gonna be a bunch of idiots burning American flags screaming “Viva La Raza,” OK?

Jones then rambled into a strange soliloquy in which he claimed that Trump was "like a Patriot sleeper cell":

I don’t really get behind candidates a lot, but I know the system is scared. They know you at least are for real, trying to take over from them, and that scares them enough. Now you better try to take the Republic back for the people, and you say you are, and you say you’re committed.

You seem to be a very humble person at the end of the day, and down to earth. And I know a lot of folks that know you behind the scenes, and they say you were totally aware of the New World Order before I was even born, that you’re basically like a Patriot sleeper cell, really planted to go after them. And so I believe that.

Back at the Daily Stormer, the notorious hacker Weev – who has been recently associated with hack attacks in which campus faxes were flooded with white-supremacist flyers – offered an ominous warning for any conservatives (whom he and his fellow “alt-right” activists have sneeringly dubbed “c---servatives,” or “c----”) who might dare to continue to refuse to get in line with Trump:

As Trump’s once-ridiculed dreams transform from fevered visions to shadows upon the ruined landscape of Weimerica, we use that darkness to attack our mutual enemies. Now is the time to lean hard on everyone #NeverTrump. There is no method of ruin too rude or personal to destroy these people. We bombard their employers with hateposting. We show up at the doors of their homes to call them c---- and traitors to their faces. We do whatever is necessary to run these people out of town and make sure they never try to slink back. We must leverage every second we have before the general election to purify the political establishment of rotten Marxists and those that would bow before them.

Evidently, this also is the way the first major-party presidential nomination in modern memory to be embraced by right-wing extremists begins.