Firearms charges are pending against a man described as a “notorious white supremacist” with a Hitler-style mustache who was arrested last weekend in New Jersey. 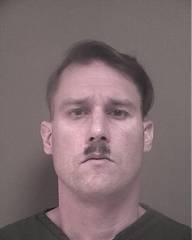 Bruce “Brus” Joseph Post III, 42, of Hamilton, N.J., remains in custody, with bond set at $400,000, on five firearms charges, including unlawful possession of weapons by a felon and possession of prohibited weapons and high capacity magazine, the Lacey Township Police Department said in a press release.

Post and another man, whose name was not released, were engaged in “suspicious activity” last Sunday in the rural Pinelands area in Ocean County, N.J. He “was wearing combat gear and gave indications of possible white-supremacist involvement,” Lacey Township Police Chief David A. Paprota said in the news release.

Officers who made the arrest discovered a military-style AK-47 assault rifle, a Walther 9mm handgun, eight 30-round high-capacity magazines and one 100-round drum magazine, along with other various forms of ammunition, the chief said. Police also found shovels and tarps the Trentonian reported in Monday’s editions.

The second individual was questioned, but not arrested after police and a K-9 searched the area.

Post, who “is known for dressing up in Nazi regalia and sporting a Hitler mustache,” was found guilty of cleaning up the scene of a 1995 murder in a Trenton, N.J., apartment, the newspaper reported.

Post’s younger brother, Joe Post stabbed to death Andrew Whited, 25, who had just been released from jail, while members of the “Pit Bull” gang were watching “Pulp Fiction,” the Trentonian reported.

Joe Post stabbed Whited stabbed twice in the chest with a dagger because the gang thought he told police about the gang’s drug dealings while he was in custody. Whited fought back, but got stabbed twice more in the head and at least 25 more times in the stomach, back, arms and legs, before Joe Post sliced the victim’s throat, the newspaper reported. Joe Post is serving a life sentence for the murder.

Post also was questioned in the murder of a friend’s mother in April 2003 before another man ultimately confessed.

Post was charged with assaulting his wife with a rubber hose in 2002, but was acquitted after his wife, who has since died, testified the beating “was done voluntarily” and that she “received gratification from it,” the newspaper reported.