A neo-Nazi skinhead who faced the prospect of returning to prison was arrested Saturday in southwestern Washington state, a day after three people were found murdered at a home where a Confederate flag flew over the crime scene.

Brent Ward Luyster, 35, a former Vancouver, Wash., man with a lengthy criminal record and neo-Nazi tattoos covering much of his body, was arrested without incident after an intensive 18-hour manhunt involving multiple law enforcement agencies in the Pacific Northwest.

He was identified as the suspect after a fourth shooting victim -- a woman shot in the face and bleeding – somehow managed to escape the shooting scene late Friday at a residence at 4006 N.W. 417th St. in Woodland, north of Vancouver, Wash. She remains hospitalized. Authorities haven’t disclosed her condition. 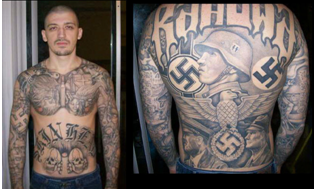 After police SWAT teams determined the suspect was no longer at the crime scene, authorities used social media and media outlets to spread the word about the fugitive, described as armed and extremely dangerous.

“We are very pleased that Mr. Luyster was taken into custody without incident, without apparently harming anyone while we were looking for him,” Clark County Sheriff’s Sgt. Fred Neiman told the Vancouver Columbian newspaper.

“We were fearful that, given what we know of him, it might have been a different story,” the sheriff’s spokesman said.

Luyster was scheduled to stand trial Monday in Cowlitz County, Wash., on charges of pistol-whipping his ex-girlfriend at his home in Longview, Wash., on May 16.

If convicted of assault, harassment and illegal firearm possession, it’s most likely Luyster would have been returned to the Washington State Penitentiary where records show he served time more than a decade ago.  His first brush with the law occurred when he was a 7-year-old child, the Columbian reported.

He has prior convictions for a drive-by shooting, taking a motor vehicle without permission, assault, rioting while armed, malicious harassment, malicious mischief, theft and other crimes.

Luyster pleaded guilty to the rioting charge in October 2014 and received 90 days in jail after he was accused of making “racially motivated threats” at a Vancouver, Wash., tavern in March 2013, the Oregonian reported. He allegedly threatened to kill an interracial couple at the tavern and threatened a black man with a pistol outside the bar.

The triple homicide occurred in Clark County, in the southwestern corner of Washington state, across the Columbia River, north of Portland, Ore.  Luyster did not live at the property where the bodies were discovered, but knew all the victims, the Oregonian reported.

“A confederate flag flew from a barn structure on the tree-shrouded Woodland property,” the newspaper reported.

The Columbian newspaper in Vancouver, Wash., reported that the victims were two men and a woman, but didn’t provide names.

The incident was reported about 10:30 p.m. Friday when the woman with a gunshot wound to the face drove more than two miles to a convenience store to seek help, identifying Luyster as the suspect.

He was taken into custody at 4:15 p.m Saturday on the Ocean Beach Highway west of Longview by the Cowlitz County Sheriff’s Office and the Washington State Patrol, the Columbian reported.

Photographs of the suspect show he has three large Nazi swastikas on his back along with “Rahowa,” a white supremacist and neo-Nazi reference to racial holy war. The word “Skinhead” is tattooed across his stomach.  He also has two rather elaborate head-profile tattoos, one of which appears to be Adolf Hitler.