In a decision that could have far-reaching consequences, the Belize Supreme Court ruled this week that a law that punishes homosexual sex is unconstitutional, making the country the first former British colony in the Caribbean to do so.

The Caribbean has a high preponderance of colonial-era laws that criminalize homosexual sex. Section 53 of the Belizean criminal code stipulates a penalty of up to ten years in prison for any person engaging in “carnal intercourse against the order of nature.”

A lawsuit challenging the law was filed in the Supreme Court of Judicature, Belize’s highest court, in 2010 by Belize native Caleb Orozco and the group he directs, United Belize Advocacy Movement (UniBAM). UniBAM’s attorneys argued that Section 53 violated provisions of the Constitution of Belize that recognize individual rights to human dignity, to be free from arbitrary or unlawful interference with one’s privacy and to equal protection under the law.

Chief Justice Kenneth Benjamin found that Section 53 of the criminal code that criminalizes consenting intercourse between adults of the same sex contravenes rights granted under the Belize Constitution, and added that the court has an obligation to amend the law so it adheres to the Constitution. He ordered an amendment specifying that section 53 does not apply to consenting sexual acts between adults of the same gender.

At least one U.S.-based organization, the fundamentalist Christian legal powerhouse Alliance Defending Freedom (ADF) advised Belize-based groups that opposed striking down the law, adding fuel to the country's already volatile anti-LGBT climate. ADF has supported the criminalization of homosexual sex, but is also involved in helping craft so-called “religious liberty” laws in the United States that would legalize discrimination against LGBT people. The group is also pushing anti-trans school policies, targeting schools that include trans-inclusive gender-affirming language in existing policies. 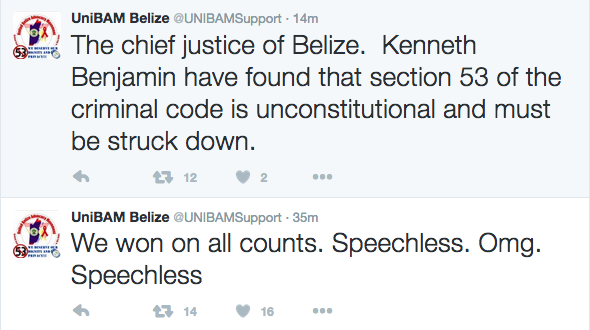 Another legal challenge is underway in Jamaica, where attorney Maurice Tomlinson brought a lawsuit last December against that country’s law criminalizing homosexuality. In July, the court admitted conservative Christian groups as “interested parties” with full rights of participation in the case, a move Tomlinson called “stacking the deck” against him. The Public Defender assigned to his case has indicated she will appeal the court’s ruling.