Editors note: The Office of the Mayor, Stephanie Rawlings-Blake, released a statement that the City has terminated the contract of Glen Keith Allen. The termination is the result of an internal investigation, prompted by the Southern Poverty Law Center’s report that exposed Allen as longtime member of the neo-Nazi organization, the National Alliance.

Attorney Glen Keith Allen, 65, however, has a long history of supporting one of the most notorious hate groups in America, the neo-Nazi National Alliance (NA). 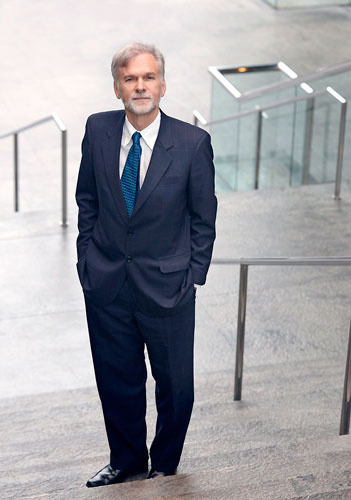 The NA was founded by William Pierce, who wrote the novel that served as the blueprint for the 1995 Oklahoma City bombing. Allen is a longtime donor and member of the NA, and public documents identify him as such. Even so, he was recently hired as an employee by the Baltimore City Law Department and is now defending the city in a lawsuit alleging that police officers withheld and fabricated evidence to wrongfully arrest and convict an African-American man for a murder it appears he did not commit.

The man, Sabein Burgess, spent 19 years in prison before being freed in 2014.

The lawsuit, filed in March of last year, alleges, “Mr. Burgess was convicted after the police withheld and fabricated evidence. In particular, the Defendants concealed statements of the victim’s son revealing that he had seen the offender and it was not Plaintiff. Rather than search for the real killer, the Defendants instead fabricated gunshot residue (“GSR”) evidence falsely inculpating Plaintiff in the crime.” 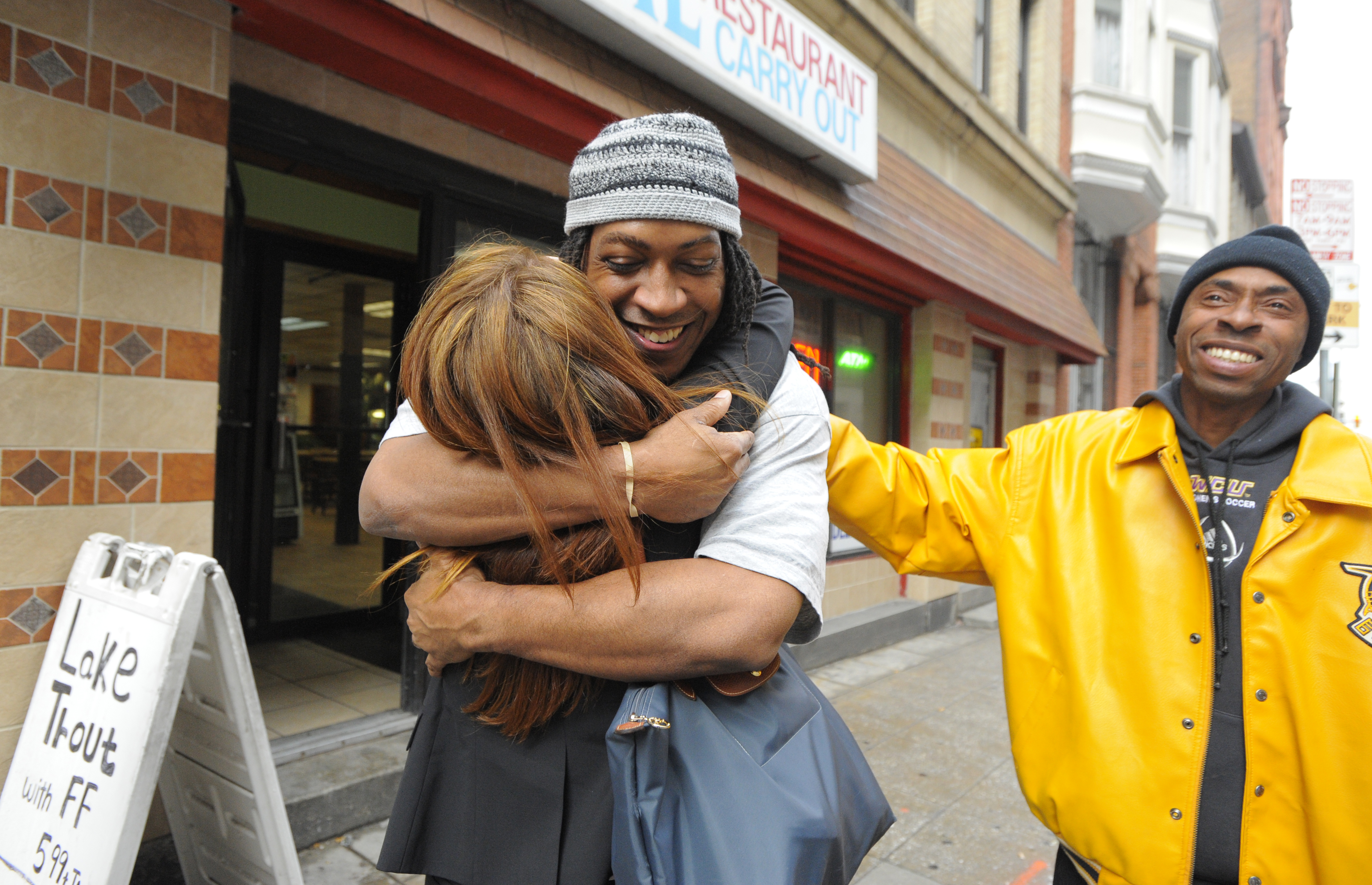 Sabein Burgess hugs Susan Friedman, one of his lawyers who helped get his murder conviction thrown out, while his older brother William Johnson celebrates his release from prison last year. (Lloyd Fox / Baltimore Sun)

Allen’s history with organized racism and anti-Semitism is deep. Records obtained by the Southern Poverty Law Center (SPLC) show he was a dues-paying member of the National Alliance for years. Allen was also a subscriber to the NA’s racist publications, purchased entrance to a Holocaust denial conference the group held and bought a Holocaust denial DVD the group sold. 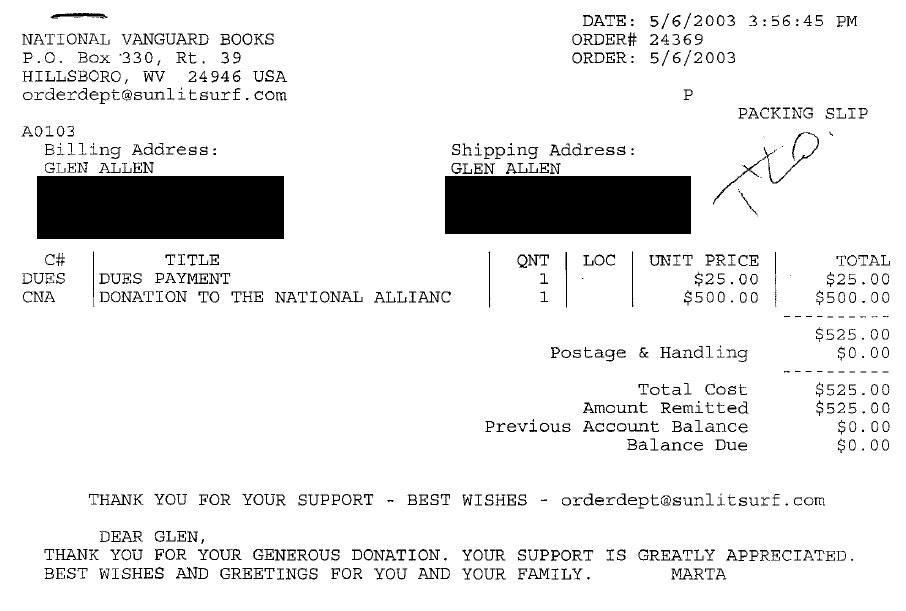 Receipt for National Alliance dues payment and $500 donation made by Glen Allen. 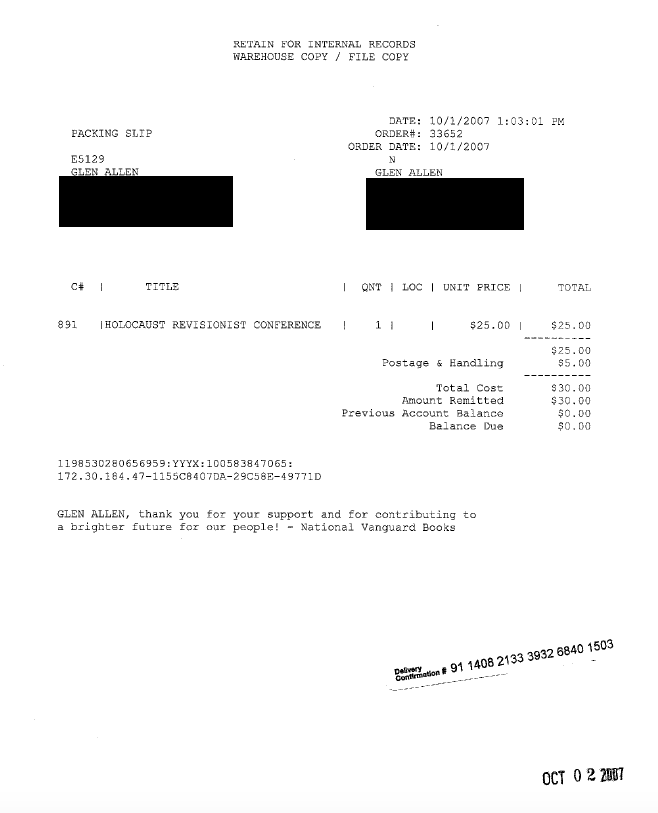 Receipt for Holocaust revisionist conference admission. The bottom of the receipt reads: "GLEN ALLEN, thank you for your support and for contributing to a brighter future for our people!"

Allen is employed by Baltimore’s Litigation and Claims Practice Group. No one in that office or the mayor’s office would comment on the record about the hiring of Allen.

It would not have taken much effort for the city to find about Allen’s background. A simple search would have revealed that he has made political contributions to a racist political party, the American Eagle Party (AEP) National Committee, according to FEC records. An offshoot of the racist American Freedom Party, the American Eagle Party is run by perennial fringe presidential candidate Merlin Miller. Miller traveled to Iran in 2012 to promote a film project. In an interview with Iran’s Press TV, Miller claimed the Israeli intelligence service, Mossad, was responsible for the 9/11 attacks.

Allen also appears to be an officer in the AEP. A post on the neo-Nazi web forum Stormfront identifies him as the group’s national secretary, though he is identified in an AEP newsletter as the group’s “Vice Chairman/Parliamentarian.” The party was promoted heavily on Stormfront last year. FEC records show Allen is the AEP’s largest contributor.

In a brief, and somewhat odd YouTube video posted last October, Allen introduced the AEP’s debate on the dangers of vaccinations, stating it was “dedicated to truth.” Allen’s video was promoted on Stormfront the day it was released.

There is more publicly available information on Allen’s association with extremists. Allen was publicly identified as the attorney for the National Alliance on the neo-Nazi Vanguard News Network (VNN) forum almost a decade ago, in a post by current NA Chairman Will Williams. The SPLC also reported Allen as the NA’s attorney in an article last year.

Baltimore’s Litigation and Claims Practice Group is arguably one of the most aggressive and successful defenders of police misconduct in the country. The Burgess case is one of three cases against Baltimore currently before the courts that allege wrongful incarceration.

A 2015 article in the Baltimore City Paper noted the Litigation and Claims Practice Group argues cases up to the U.S. Supreme Court to avoid paying plaintiffs in police misconduct cases. This delay and litigation strategy, according to the paper, “shows the lengths to which the city’s lawyers will go in defending taxpayers against liability for claims involving wrongful murder convictions.”

Despite dozens of police killings of unarmed African-Americans in the state of Maryland over the past five years – most of them in Baltimore and Baltimore County – state laws have effectively limited the costs to municipalities through immunity statutes and amazingly low caps on damages in lawsuits against police departments. A 2015 ACLU study examined 109 cases of police killings in Maryland between 2010 and 2014. Sixty-nine percent of those killed were African Americans. Forty-one percent were not armed with a weapon of any kind. Indeed, according to the ACLU, “The number of unarmed blacks who died (36 people) exceeded the total number of all whites who died (30 people) unarmed or not.”

In those 109 cases, only two officers were charged, and one was acquitted by a jury. Even when Baltimore police are found to have wrongfully murdered an unarmed African American, the cost is low. A 2014 study by the Baltimore Sun showed the city spent more on legal fees for outside counsel than it paid in judgments and settlements in more than 100 civil cases alleging police misconduct. Because of the state caps on civil damages in police abuse cases, more than 100 cases cost the city $5.7 million dollars in damages, while the legal fees spent on outside lawyers exceeded $5.8 million dollars.

The city lobbies heavily to keep these damage caps low. According to the Law Department’s annual report, the Litigation and Claims Practice Group “asserts and aggressively attempts to preserve the damage limits established by the State.”

To further limit damages, the Group has also become much more aggressive in defending the city as wrongful death lawsuits against police have begun to rise. The annual report states, “Plaintiffs’ attorneys are learning that merely filing a suit against the City will not result in a settlement, but that the City aggressively defends claims whenever appropriate. The resulting positive outcomes discourage the filing of nuisance suits, thus curbing the national trend of ever increasing claims. The Group now achieves a 75% litigation win rate.”

Allen may well be a skillful attorney. But at a time when Baltimore and its police department are facing devastating criticism over their policing practices, and a crisis over their treatment of minority residents, the hiring of a known neo-Nazi to litigate for them surely raises questions. 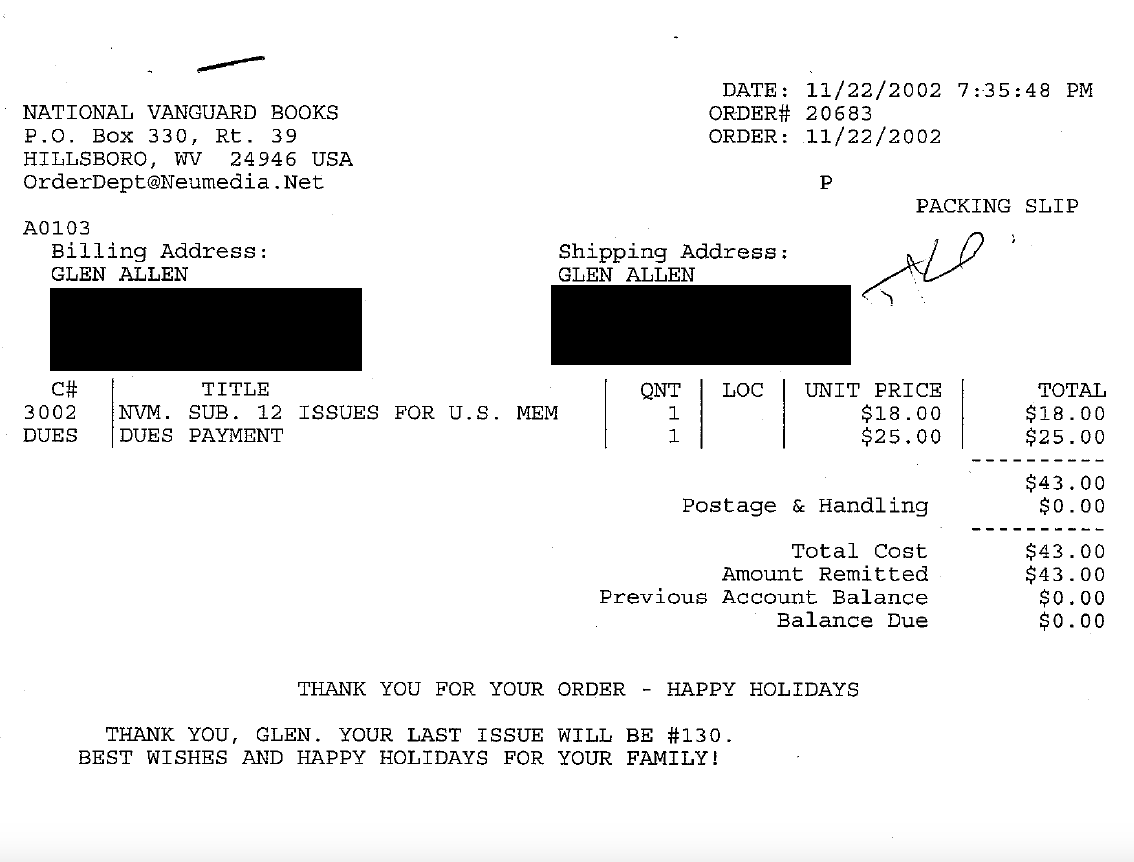 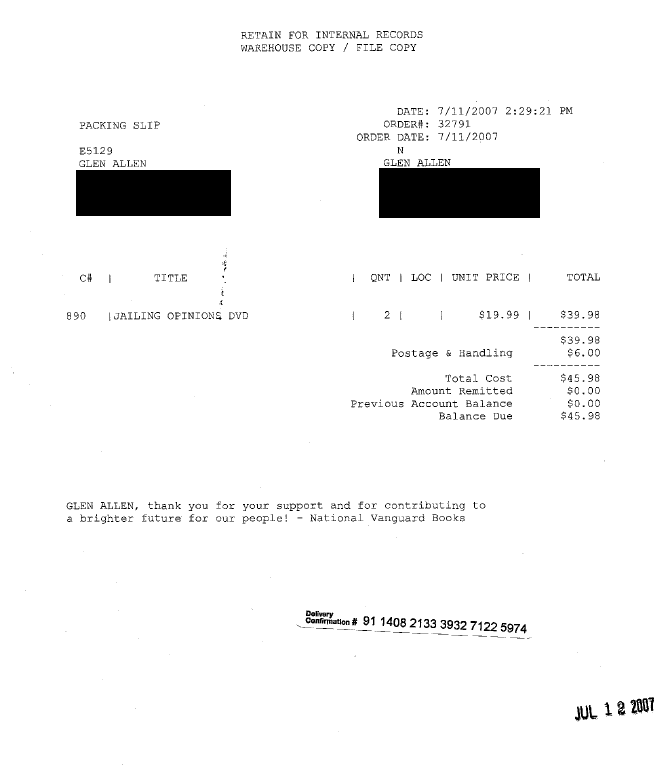