Last night, The Wall Street Journal reported that the Trump campaign hired Stephen Bannon, the executive chairman of Breitbart News LLC, as its chief executive – a move that brings the campaign even closer to the nebulous Alt-Right movement. 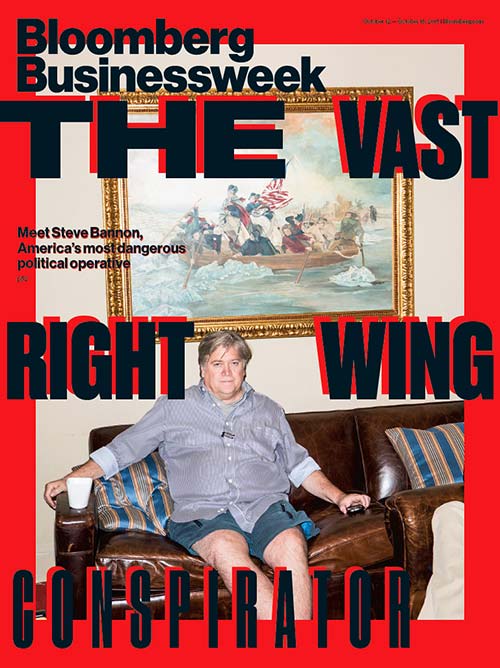 Stephen Bannon profiled by Bloomberg in 2015. The late Andrew Breitbart, founder of Breitbart News, once called Bannon "the Leni Riefenstahl of the Tea Party movement."

Since the Republican primaries, Breitbart News has served as a major Trump campaign booster while also appealing to the insurgent far-right Alt-Right movement, which makes up a highly visible base of online Trump supporters.

Like Breitbart and the Trump campaign, the Alt-Right shares an antipathy for mainstream conservatism and the GOP. From our Extremist Profile:

The Alternative Right, commonly known as the Alt-Right, is a set of far-right ideologies, groups and individuals whose core belief is that “white identity” is under attack by multicultural forces using “political correctness” and “social justice” to undermine white people and “their” civilization. Characterized by heavy use of social media and online memes, Alt-Righters eschew “establishment” conservatism, skew young, and embrace white ethno-nationalism as a fundamental value.

Donald Trump’s campaign has repeatedly been caught retweeting Alt-Right accounts and memes. Recently, Trump appeared at a campaign rally with a poster based on an anti-Semitic meme previously circulated online by notorious white supremacist David Duke.

With Bannon embracing Trump, all that changed. Now Breitbart has become the alt-right go-to website, with [Milo] Yiannopoulos pushing white ethno-nationalism as a legitimate response to political correctness, and the comment section turning into a cesspool for white supremacist mememakers.

Back in April, Hatewatch reported how Breitbart was serving as the media arm for the Alt-Right following its glowing profile of the movement:

Over the past year the media outlet has been openly promoting the core issues of the Alt-Right, introducing these racist ideas to its readership – much to the delight of many in the white nationalist world who could never dream of reaching such a vast number of people.

Along with the hire of Bannon, Trump campaign worker Kellyanne Conway – a pollster often cited by anti-immigrant and anti-Muslim organizations such as the think tank Center for Security Policy and NumbersUSA – was promoted to campaign manager.

Political observers, however, speculate that the hiring of Bannon will further erode hopes within the GOP that Trump will rein in his trademark bombast and “pivot” toward the center.

As the Washington Post reported, Bannon has other ideas:

Bannon, in phone calls and meetings, has been urging Trump for months to not mount a fall campaign that makes Republican donors and officials comfortable, the aides said. Instead, Bannon has been telling Trump to run more fully as an outsider and an unabashed nationalist.