The American Freedom Alliance (AFA), which claims to be a "non-partisan, non aligned [sic] movement which promotes, defends and upholds Western values and ideals," invited a veritable all-star cast of anti-Muslim speakers and activists to the posh Luxe Hotel on Sunset Boulevard Sunday for a conference to ask if Islam and Western civilization can coexist. Unsurprisingly, the speakers responded “no” before they claimed that there is no such thing as “moderate” Islam, linked ISIS to Syrian refugees, and championed Donald Trump for president. 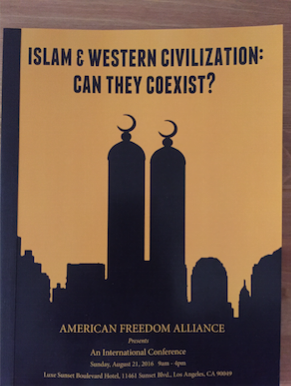 A number of people with ties to the Trump campaign also addressed the crowd. Frank Gaffney, conspiracy-mongering head of the anti-Muslim hate group Center for Security Policy (CSP) lauded Trump’s national security speech, which called for suspending immigration from “volatile regions,” and for the return of an ideological screening test. One of Gaffney’s employees, Joseph Schmitz, who did not address the AFA event, is a Trump advisor. Former Congressman Pete Hoekstra, a man who allegedly is working as an advisor for Trump’s national security team, according to panel moderator Larry Greenfield, also addressed the crowd.

The unwavering support for GOP presidential candidate Trump was noticeable well beyond the two women wearing “Make America Great Again” hats at the event. “For those that grumble about Trump, get over it!” bellowed long-time anti-Muslim activist Pamela Geller, to rapturous applause. Robert Spencer, Geller’s co-founder of the anti-Muslim hate group Stop Islamization of America, agreed. Spencer praised Trump’s challenge to the so-called hegemony of the political and media elite before stating, “But whatever happens with Trump the fact is that the things that the media has given [him] the most trouble about are the things that make him the most popular." He continued, "Building a wall, Muslim ban on immigration, these are the things that people are saying--finally, we have a politician who is actually addressing our concerns instead of doing these things that are committing essentially national and civilizational suicide and telling us its good for us.” 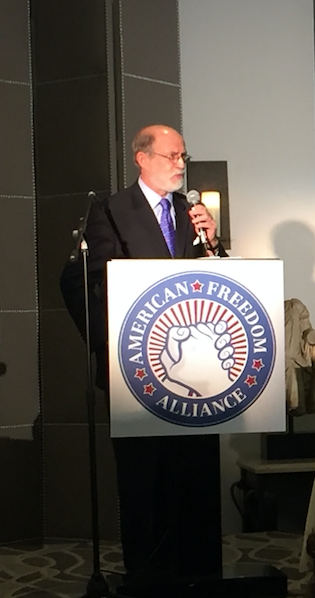 Stephen Coughlin, a senior fellow at CSP, told the crowd to get behind Trump: “Trump’s victory may not be your victory, and I can understand people who are there on that, but you need to rest assured that his defeat is your defeat.”

The enthusiasm for Trump was only matched by the speakers’ open hostility to and loathing of Islam. For many of the speakers, there is no “moderate” Islam and there are no moderate Muslims. Gaffney called Islam a “seditious ideology” while another popular speaker on the anti-Muslim circuit, “Ace” Lyons, an 88-year-old retired U.S. Navy Admiral, stated, “I reject the term ‘radical Islam.’ That implies there is some moderate Islam. There ain’t any and you all know it!”

Bosch Fawstin, the man who won Pamela Geller’s “Draw Mohammed Cartoon Contest” in Garland, Texas, last year used his speech to lambast Marvel Comics for what he saw was the replacement of its superheroes with Muslims. “And who are the superheroes in Islam? Jihadists,” he said. Fawstin went on to say, “When I see the words 'Nazism means peace', what is your reaction?” The crowd responded with laughter. “That’s my reaction to Islam means peace.”

Nonie Darwish, an Egyptian-born anti-Arab activist on the anti-Muslim circuit, is often touted as an “expert” on Islam. She has lived in the United States for decades and is currently an evangelical Christian. “Lying and slander is an obligation in Islam,” she said, before asserting, “In Islam, seizing wealth from others is a value.” Darwish also claimed that Muslim prayers are exhibitionist and praying on the street is a form of intimidation.

Wafa Sultan, an anti-Muslim activist who came to the U.S. from Syria, told the attendees over lunch that, “There is no such thing as Islam and radical Islam. All Islam is radical.” Later she exclaimed, “But Islam is not good. Nor does it have good intentions.” Sultan allegedly agreed with an audience member at an event in 2009 that at some point, the West will need to use nuclear weapons against Islam.

The linking of Syrian refugees to ISIS was also a central theme touched on by many speakers at the event. Gaffney, who has pushed conspiracy theories about Muslim Brotherhood infiltration (including one such accusation against anti-tax crusader Grover Norquist, whose wife is Palestinian), described Syrian refugees resettling in Europe and America as “Refujihad” during his speech.

James Simpson, who has worked closely with Gaffney’s CSP and also spoke at the event, referred to refugee relocation to the U.S. and Europe as an “agenda.” Simpson stated, “And in fact, the entire multicultural agenda is not an innocent agenda. The goal is to erase Western culture. The goal is to bring in so many different diverse cultures and peoples backgrounds that our unique culture that has given us unprecedented prosperity and peace will be, will just vanish.” Morten Klein, head of the Zionist Organization of America (ZOA), whose president of its Los Angeles chapter has supported the anti-Muslim activities of Pam Geller, attacked Syrian refugees during his speech. “We oppose them because of what they do and say and because the fact we can’t vet them - they have hostile views about America, Jews and Christians…” he alleged. 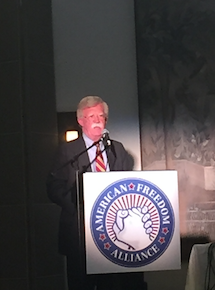 The event included a rash of anti-Muslim conspiracy theories espoused by the speakers and audience alike. Some in the crowd voiced the falsehood that President Obama is a Muslim while the event's keynote speaker, former ambassador to the U.N. John Bolton, who just last year called for the bombing of Iran, scoffed, “King Abdullah of Jordan, who is not simply a Muslim king of a Muslim country, unlike our president” who, he seemed to be implying, is a Muslim king of a Muslim country.

James Simpson included a slide in his presentation that warned of the diseases being brought to America by refugees as well as the issue of “Muslim rape culture.” Simpson’s boss, Frank Gaffney, was not to be outdone. Gaffney blamed President Obama for exposing Americans to more extremists by claiming “quite a number of” the felons he released from prison for minor drug offenses have “converted to jihad in jail.”