A glimpse into the underworld brutality of white supremacy gangs came this week when a member of the Oregon-based “Krude Rude Brood” was sentenced to 55 years in prison.

David Ray Bartol, 45, was sentenced for “horrifically torturing” two fellow members of the white supremacist gang in 2012 and 2013, the Oregonian reported. 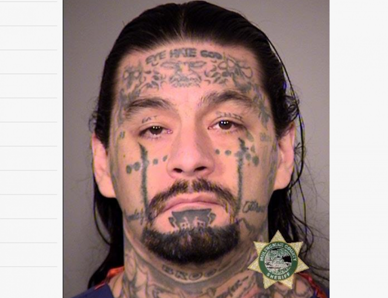 In the first case, Bartol used an “industrial belt sander” in an attempt to remove a tattoo from a fellow gang member who apparently had failed to follow orders or was suspected of being a police informant.

After the sander-torture, Bartol and an accomplice placed a motorcycle helmet on their victim before firing a bullet at his head at close range and injecting heroin into his neck.

When he was no longer breathing, the victim was dumped on a Portland street, wearing only his underwear. He survived the vicious December 2012 assault, the newspaper reported.

Two months later, Bartol and others kidnapped another man and tortured him in a spray-paint booth of an auto body shop – the site chosen apparently to contain the victim’s blood.

The unconscious victim - with injuries that included two gunshot wounds to the abdomen - was dumped in southeast Portland. He survived months of painful recovery, but was found dead of a heroin overdose in February 2015, the newspaper reported.

The brutal assaults and other crimes led in 2013 to a massive, multi-agency investigation in Oregon, code-named “Operation White Christmas,” that dug into links between white supremacists and outlaw motorcycle gangs. Ultimately, almost 60 arrests were made, leading to assorted charges in state and federal court.

The investigation also probed the connections between those white supremacy gangs and associates of the Gypsy Jokers outlaw motorcycle gang whose members were suspected of involvement in firearms and drug trafficking.

The Bartol prosecution was one of the highest-profile cases.

Bartol was found guilty by a Portland jury this summer of involvement in both assaults as well as 22 other counts. His defense attorneys argued that Bartol, who has been in and out of prison since he was 15, has impulse control issues and a below-average IQ caused by fetal alcohol syndrome.

His new prison term will be served consecutive to an 18-year sentence Bartol already is serving for two home-invasion robberies he carried out in Salem, Ore., south of Portland, after the two tortures. During one robbery, Bartol shot a man in the chest. In the second, he pointed a gun at the victim’s forehead and “asked him if he wanted to die seconds before police arrived,” the newspaper reported.

But Bartol’s courtroom days aren’t over yet.

He faces trial later this month and the possibility of the death penalty if found guilty of aggravated murder for the death of another inmate at the Marion County Jail in Salem in June 2013. Bartol is accused of using a deputy’s flashlight to hit the inmate on the head before repeatedly pounding a shank into the victim’s left eye, killing him.