A Texas lawyer who shot and wounded nine people Monday in Houston was wearing a vintage military uniform with Nazi emblems and was equipped with 2,600 rounds of ammunition and submachine gun like those used in World War II, police confirmed.

Nathan DeSai, 46, was fatally shot by responding police officers after firing an estimated 75 rounds from a 45-caliber handgun, wounding passersby during a 20-minute rampage on a street near West University Place in Houston. 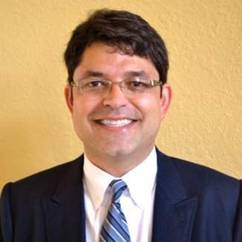 Law enforcement sources said the shooter was wearing what appeared to be an antique German uniform with swastikas on it when he took cover behind a tree, exchanging gunfire with nine police officers in the 4400 block of Law Street, KPRC‑TV in Houston reported.

The Houston Chronicle reported that six of the wounded, with non-life-threatening injuries, were transported to area hospitals after the 6:30 a.m. mass shooting. Three others were treated at the scene and released.

The Houston newspaper also reported the shooter was wearing “what appeared to be an antique German [military] uniform with swastikas on it, with “military-style spats” over his boots.

Police found 2,600 rounds of ammunition in the shooter’s car, a black, late-model Porsche, located at the shooting scene, along with two firearms, a 45-caliber handgun and a Thompson submachine gun. Additional Nazi paraphernalia and “several other weapons” were found in the shooter’s residence, police said.

Houston police are working with the FBI in an attempt to determine a motive for the random, mass shooting.

Houston Police Capt. Dwayne Ready confirmed that investigators found Nazi emblems on the shooter’s body and later during a search of his apartment, the Chronicle reported.

“To what extent [the Nazi paraphernalia] played … I don't know, because there was also other, what I would refer to as historic or vintage military stuff in the apartment, going back to the Civil War,” the Houston police captain told the newspaper.

DeSai held a law degree from the University of Tulsa, where he graduated in 1998, and was in good standing with the Texas State Bar Association, the newspaper reported.

He specialized in criminal, business and family law, according to the bar association.

A 12-year partnership with his law partner, Kenneth McDaniel, was dissolved in February for “economic reasons,” the Chronicle reported.  Since then, DeSai reportedly had continued working from his residence, but was having difficulty attracting clients, his father told other media outlets.

“DeSai’s name was written with the ‘s’ capitalized in media reports in Houston, making it sound European, but his father was identified as Prakash Desai," a retired geologist,” the newspaper reported.